1 This year Canada’s Donna Strickland became only the third woman in history to win the Nobel Prize in physics. The first was Marie Curie. Who was the second?
a. Jocelyn Bell Burnell, for pulsars
b. Maria Goeppert-Mayer, for the structure of the nucleus
c. Lise Meitner, for nuclear fission
d. Vera Rubin, for dark matter

Answer: b. The other three women are widely considered to have done work that is Nobel-worthy, but they were either overlooked during their lifetimes or saw male colleagues awarded for the discoveries of which they were part. 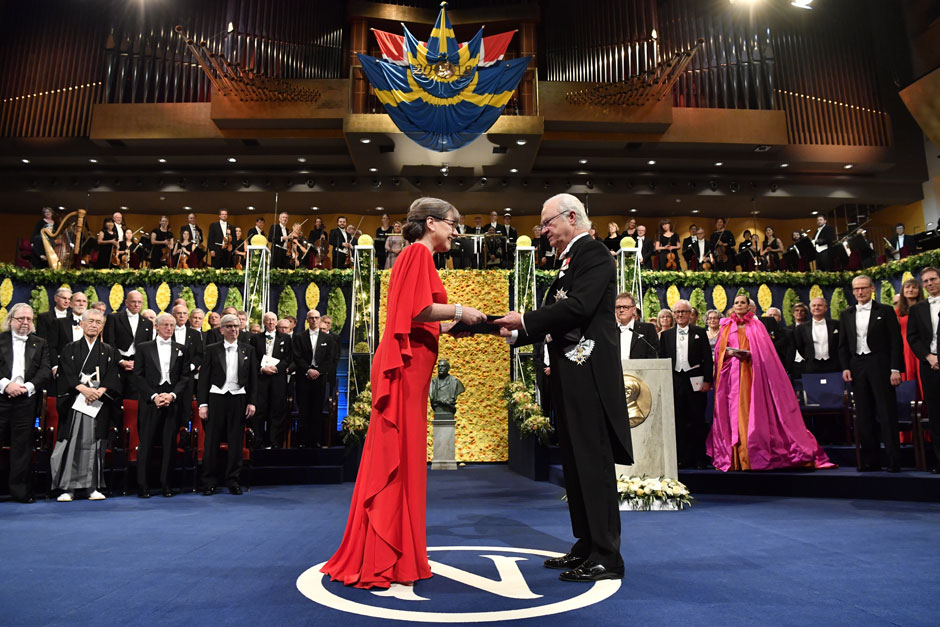 2 While conducting her Nobel-winning research in the 1980s, Dr. Strickland sent pulses of laser light through a 1.4-kilometre-long fibre-optic cable. Why was it that long?
a. She accidentally broke a longer piece and that’s what was left
b. That was the distance across the campus where she was conducting her experiment
c. She needed to delay the pulses by exactly 4.6 billionths of a second
d. It was the longest distance that light could be sent through a cable without signal loss

Answer: a. While the long cable snapped as she was uncoiling it, the remaining 1.4-kilometre length proved to be enough to spread out the pulses of light before they were amplified and compressed to achieve a more powerful laser. The now widely used technique she pioneered is called “chirped pulse amplification.”

3 Canada’s David Saint-Jacques will celebrate the new year aboard the International Space Station, after nearly a decade of training for space flight. What professional role did he have before becoming an astronaut?
a. An astrophysicist
b. An engineer
c. A medical doctor
d. All of the above

Answer: d. An accomplished polymath, Dr. Saint-Jacques also speaks five languages and holds a commercial pilot’s licence. Learn more about him in the mini-doc below.

4 November saw the successful landing of NASA’s InSight probe on the surface of Mars. One of the mission’s goals is to measure the size of the planet’s core. How will InSight do this?
a. By taking an X-ray, using cosmic rays that pass through the planet
b. By listening to the vibrations of meteorites striking the surface
c. By measuring the core’s gravitational pull
d. By deploying a mechanical snake that will bore down to the core over the next two years

Answer: b. The seismometer that InSight carried to Mars is sensitive enough to pick up the vibrations of meteorite impacts and use their echoes to map out the planet’s internal structure. 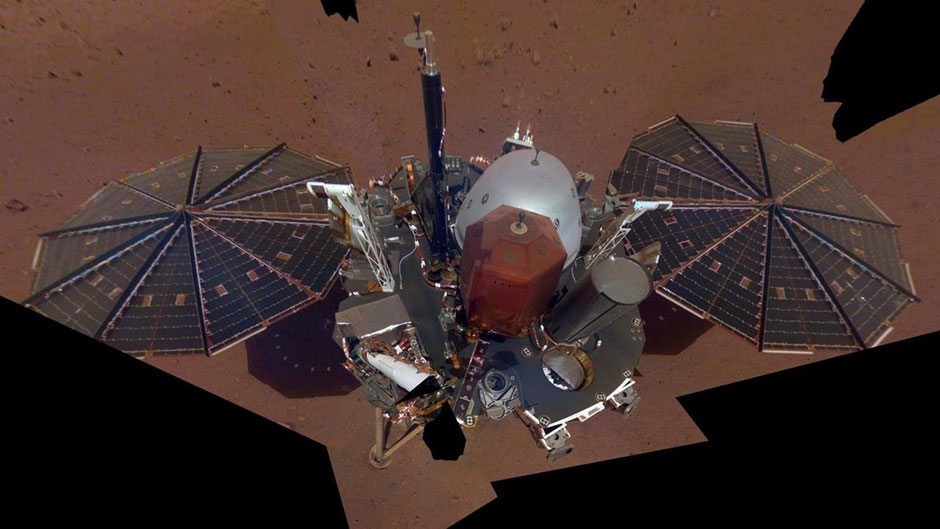 Dec. 11, 2018: A composite image made available by NASA shows the InSight lander on the surface of Mars. The InSight lander used the camera on its long robotic arm to snap a series of pictures assembled into a selfie.

NASA/JPL-CALTECH VIA THE ASSOCIATED PRESS

5 From Hawaii to Guatemala to the Philippines, this was an unusually active year for volcanoes. In which province or territory was Canada’s most recent volcanic eruption?
a. British Columbia
b. Quebec
c. Prince Edward Island
d. Yukon

Answer: a. Estimates on when the Lava Fork volcano in northwestern B.C. last erupted range from 115 to 150 years ago. But there is no disputing that it is the site of Canada’s most recent eruption.

Answer: c. However, at present, the world is not on course to halt global warming within the Paris Agreement target, let alone the more ambitious 1.5 C target.

7 Last spring, when a caribou survey team in British Columbia’s Wells Gray Provincial Park discovered a deep hole that leads into what may be Canada’s largest cave, what did they nickname their find?
a. Bottomless Pinocchio
b. Cari-bye
c. Godric’s Hollow
d. Sarlacc’s Pit

Answer: d. The nickname comes from the multi-tentacled hole in the ground that slowly digests unhappy prisoners in the Star Wars film Return of the Jedi. 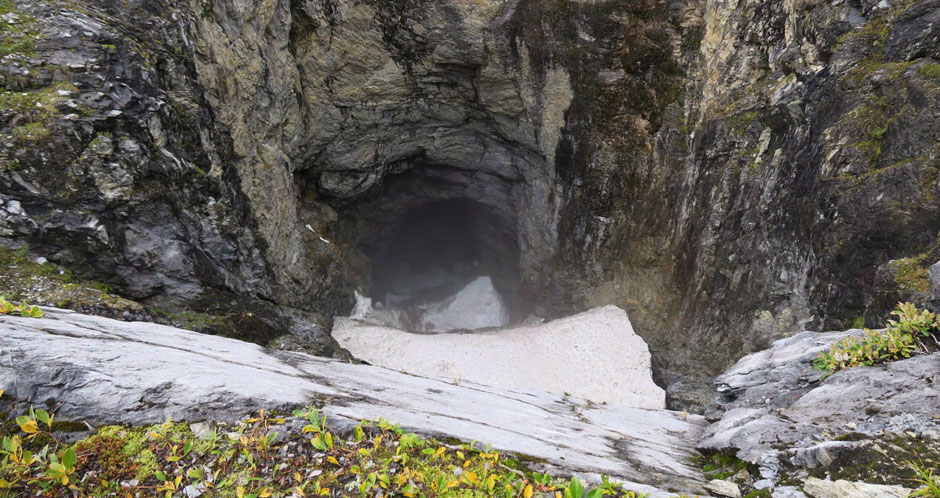 8 What did University of Alberta scientists report that they discovered buried underneath a massive glacier on Nunavut’s Devon Island this year?
a. Artifacts from the Franklin expedition
b. An impact crater
c. Saltwater lakes
d. A snake

Answer: c. The two small lakes, discovered with ground-penetrating radar, are estimated to be at a temperature of –10.5 C and kept liquid by their extreme saltiness. They may have been sealed off from their surrounding environment for up to 120,000 years, and therefore could host a unique community of microbes.

9 This past summer, scientists at Dalhousie University teamed up with the New England Aquarium, conservation groups and the Canadian military to observe right whales in the Gulf of St. Lawrence. Why do scientists think the whales are congregating there instead of their historic habitat in the Gulf of Maine?
a. To avoid collisions with ships
b. Because of changing ocean temperature
c. They are seeking areas with less underwater noise
d. Because of tightening U.S. visa rules

Answer: b. Scientists suspect that a rise in ocean temperature has shifted the whales’ food supply, which consists of tiny crustaceans known as copepods that sit suspended in frigid waters near the sea floor.

10 At an October meeting in Ottawa, conservation biologists warned that every existing population of caribou in Canada faces the risk of extinction. Where in Canada has a listed caribou population already gone extinct?
a. Gaspé Peninsula
b. Haida Gwaii
c. Prince Edward Island
d. Wells Gray Provincial Park

Answer: b. Members of a subspecies of woodland caribou on Graham Island, part of the Haida Gwaii archipelago, have not been seen since the 1930s. The population was declared extinct in 1984.

11 This year, scientists documented a rarely observed case of animal infanticide in a Yukon forest. What kind of animal did they watch attack and kill newborns of the same species?
a. Grizzly bear
b. Lynx
c. Red squirrel
d. Wolverine

Answer: c. The butchery was witnessed by a University of Alberta biologist as part of a long-running study called the Kluane Red Squirrel Project. In their report, scientists posit that male squirrels may kill the young of their rivals when food is abundant, banking on the chance that females will give birth again – this time to the killer’s offspring – in the same breeding season. 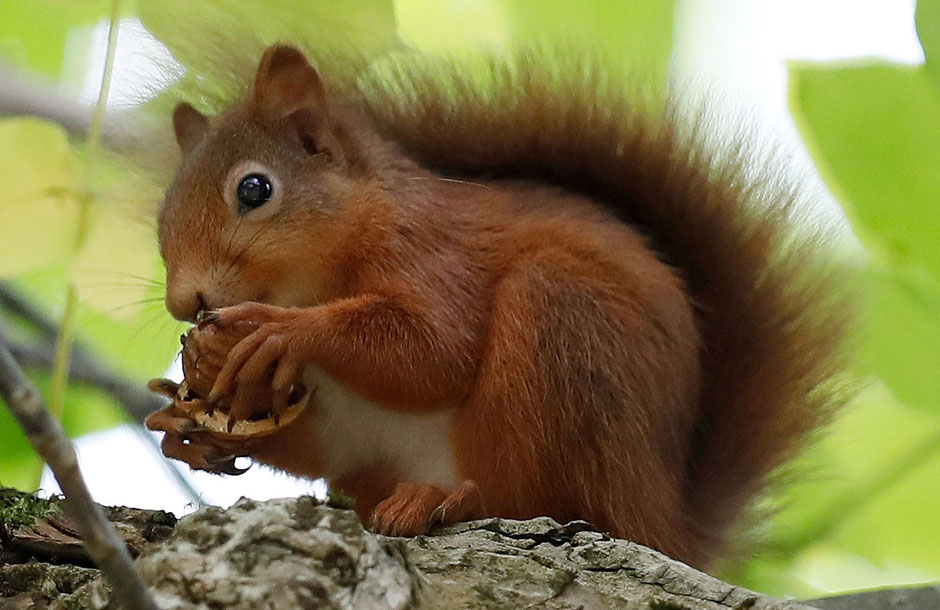 12 What did scientists find preserved inside a 100-million-year-old piece of amber, according to a scientific report published this year?
a. A cockroach
b. Dinosaur DNA
c. The oldest known feather
d. A snake

Answer: d. The embryonic or baby snake is less than five centimetres long. Along with a fragment of shed snake skin, it was encased in tree resin which then fossilized. The rare find was discovered at an amber market in Myanmar. 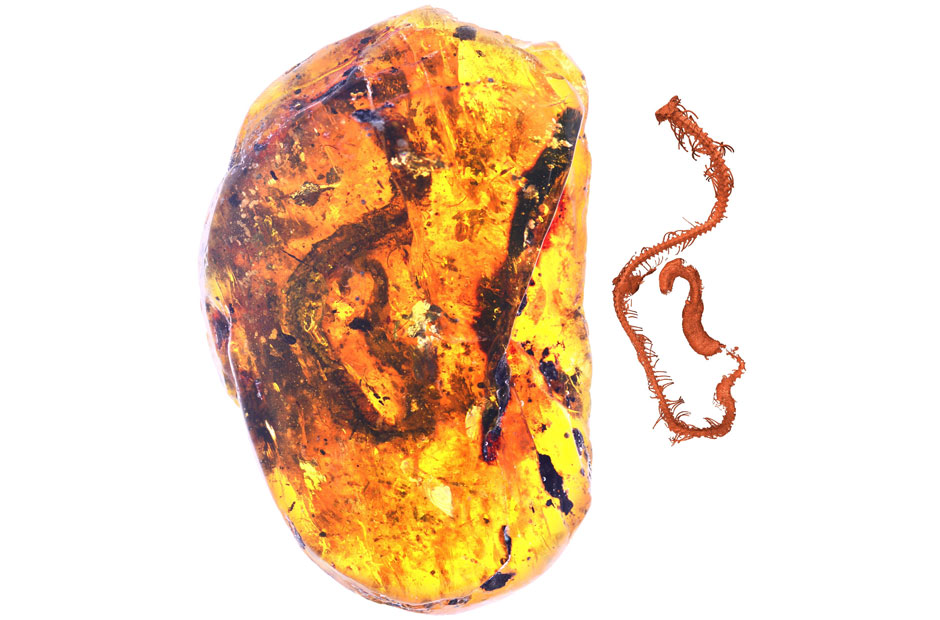 The fossil of a baby snake caught in amber, left, and a 3-D reconstruction of the fossil by Ming Bai.

13 What did octopuses become when scientists at the Johns Hopkins Medical School gave them ecstasy in a behavioural experiment published this year?
a. Gregarious
b. Hyperactive
c. Obstinate
d. Shy

Answer: a. The California two-spot octopus is normally an anti-social creature that avoids other members of its species except when mating. In the study, octopuses that were given the drug MDMA (ecstasy) showed a strong preference for mingling with others. Researchers say the study could help pinpoint the neurochemical channels that MDMA activates and lead to new treatments for social anxiety in humans.

14 This year, He Jiankui, a researcher based in Shenzhen, China, stunned colleagues and the world when he announced that he had used the gene-editing technology known as CRISPR to modify the genes of twin girls who were born on Nov. 8. What is the intended result of the specific change he made to their DNA?
a. To boost their intelligence
b. To make them more resistant to HIV
c. To remove the gene variant that causes retinitis pigmentosa, a form of blindness
d. No result other than showing that human genes can be easily modified

Answer: b. Dr. He said he targeted the gene CCR5 to create a mutation that is thought to produce resistance to HIV-1, one form of the virus that causes AIDS. Many scientists have condemned the controversial experiment because of the potential risks of the technology and the ongoing ethical debate over making changes to an individual’s DNA that can be passed on to future generations. 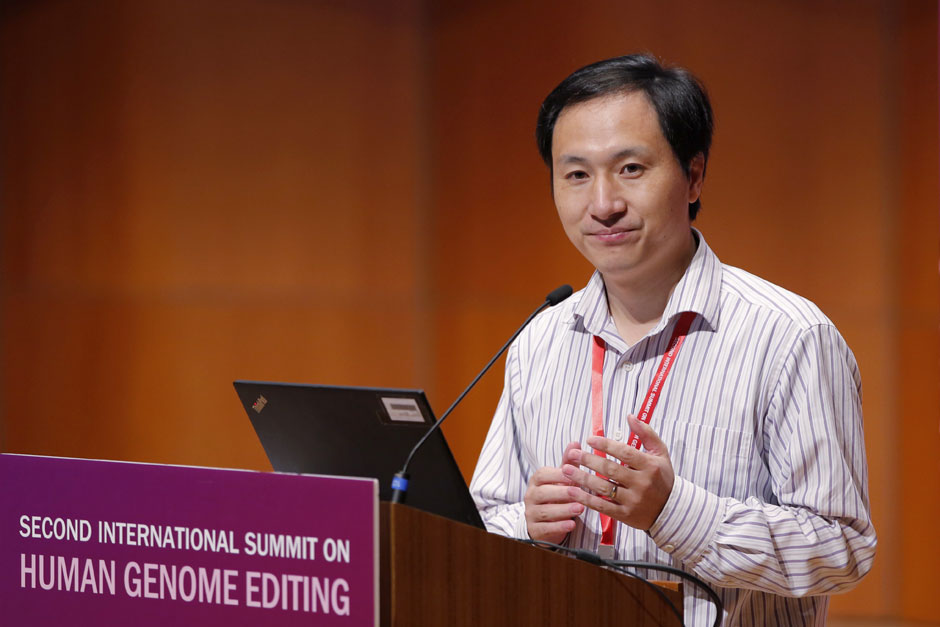 Answer: b. Working with a patient who had had brain surgery to relieve epileptic seizures, Dr. Milner was able to demonstrate in the 1950s that the brain’s temporal lobe is crucial for encoding long-term memories. 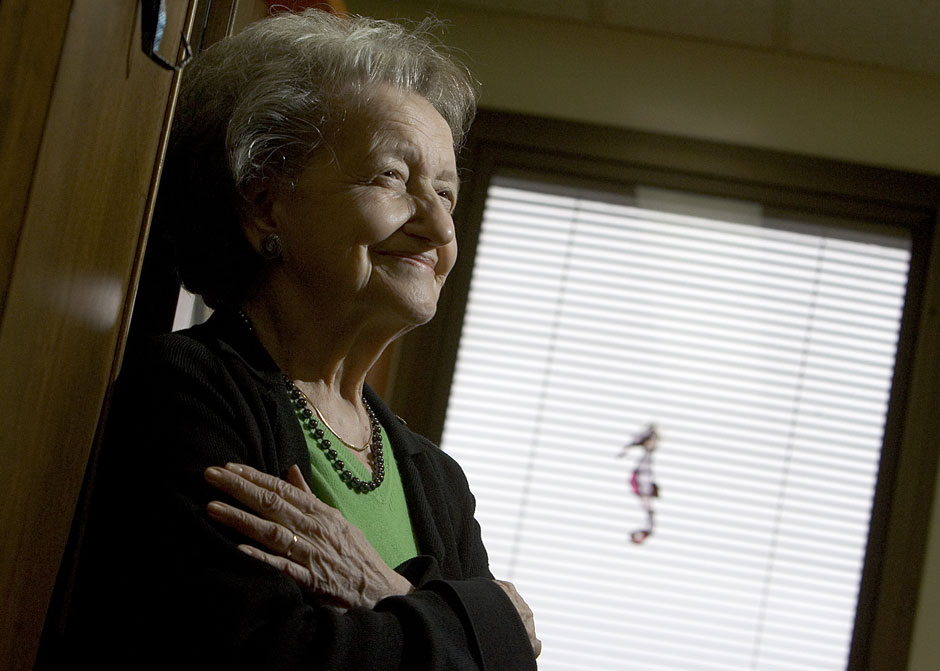 16 What did European scientists report they have detected in human stool samples for the first time this year?
a. Ash from volcanic eruptions
b. CRISPR-modified DNA
c. Microplastics
d. A snake

Answer: c. In a pilot study involving subjects from seven different European countries and Japan, all the subjects tested positive for plastic particles in their stool samples. The makeup of the particles matches what is commonly used in plastic food packaging.

17 According to a 2018 analysis, if current trends hold, how long will it take for the process of “bitcoin mining” – in which powerful computers crunch mathematical equations to generate cryptocurrency – to cause the emission of enough carbon dioxide to push global warming beyond the Paris Agreement target of 2 C?
a. 16 years
b. 32 years
c. 64 years
d. It never will

Answer: a. The analysis suggests that further development of cryptocurrencies will exact a serious environmental cost unless the world moves to more efficient and non-carbon-emitting forms of generating electricity.

18 In a massive online survey designed to test what criteria should guide self-driving cars in fatal accidents, scientists learned that people in different parts of the world have different moral priorities. Relative to respondents in other regions, what choice did North Americans tend to favour in accidents where at least some people are likely to be killed?
a. Sparing pedestrians
b. Sparing the lawful
c. Sparing women and children
d. Whatever requires the least action on the part of the computer

19 What does Sonmiani, Pakistan, have in common with the Karaginsky District in Russia?
a. They both appear as sites of massive industrial impact in the 2018 documentary Anthropocene
b. They are the last two places on Earth where the 1918 Spanish flu claimed human lives
c. They are the locations of the world’s two largest bitcoin-mining operations
d. They are at opposite ends of the longest possible straight-line journey by boat

Answer: d. In a study published last April, a pair of computer scientists showed that a boat heading southwest from the Pakistan coastal city could thread between Madagascar and Africa, skirt the tip of South America and then cut across the Pacific Ocean until it hit Russia’s Siberian coast, without ever having to change direction.

20 This year archeologists reported what could be the oldest known human drawing on a stone fragment that was discovered in a South African cave. What does the drawing look like?
a. A female figure
b. A flying saucer
c. A hashtag
d. A snake

Answer: c. For those with Twitter-conditioned eyes, the crisscrossed lines drawn with red ochre vaguely resemble a hashtag.

A stone flake discovered in a South African cave that researchers say has the oldest known drawing by Homo sapiens on its surface.

Having trouble viewing this quiz on a mobile app? Try this link