Good afternoon, and welcome to Globe Climate, a newsletter about climate change, environment and resources in Canada.

Joe Biden being elected the next president of the United States provides a lot of answers around the next steps in how U.S. politics will impact Canada’s climate plans. But it also introduces a number of new questions.

If you have questions or are interested in learning more join us on Thursday, Nov. 12 at 1:30 p.m. ET as Globe columnist Adam Radwanski talks to Sarah Petrevan, policy director at Clean Energy Canada, about what Biden’s election win means for Canada’s climate strategy.

Mark it in your calendars, and watch the live video on our Facebook page later this week. 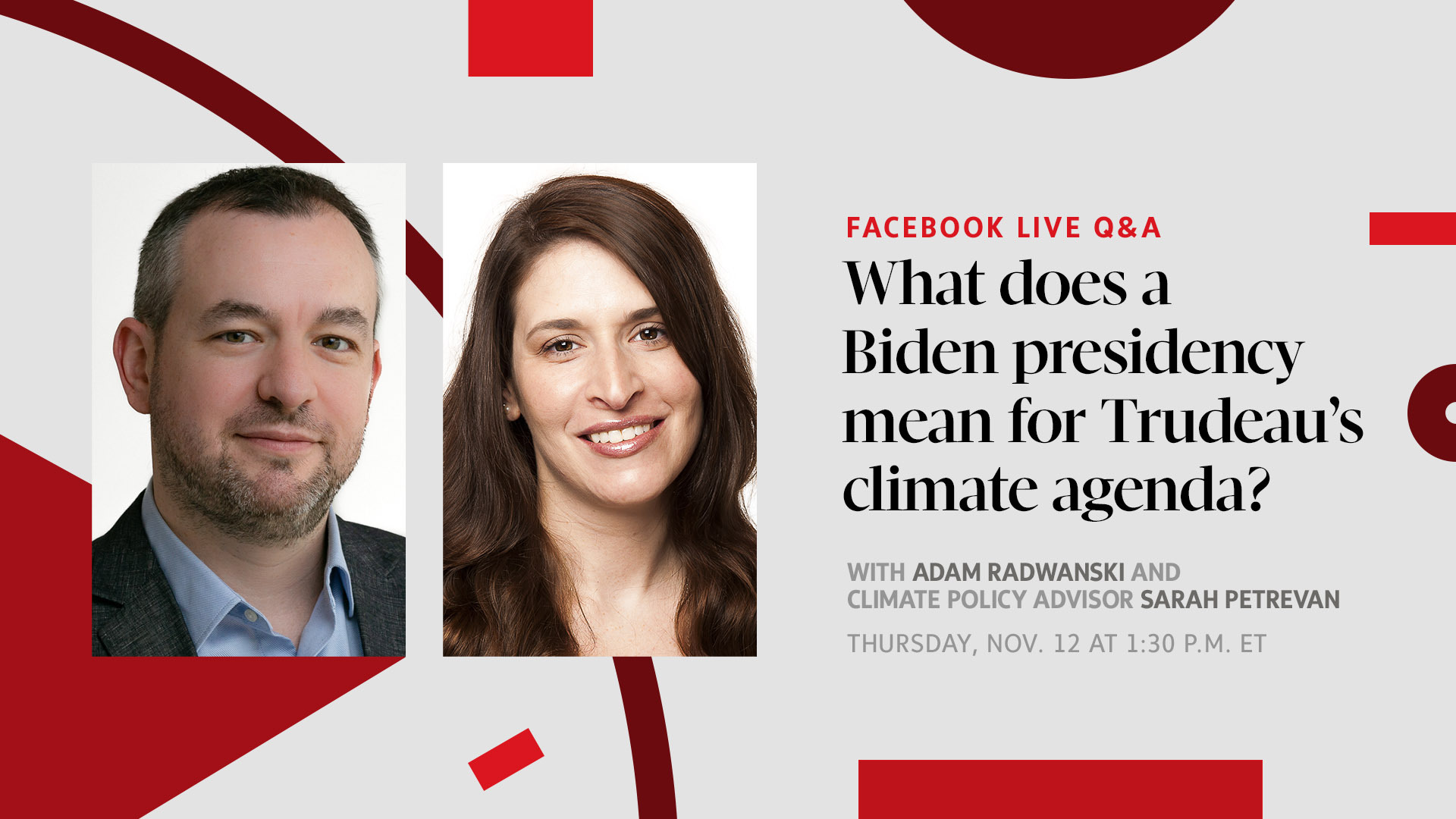 Now, let’s catch you up on other news.

Joe Biden will change the calculus of Canadian climate policy

The following is an excerpt from Adam Radwanski’s break down on how Biden’s presidency will impact Canadian climate policy. Click here to read the full article.

With Joe Biden as its next president, the United States will rejoin the global fight against climate change.

But he will still be able to use executive powers and federal agencies to reverse Donald Trump’s slashing of environmental regulations. He will support climate efforts by states and the private sector, rather than actively impeding them as Mr. Trump did. He will return the U.S. to the Paris Agreement and, per his campaign platform, try to take a global leadership role in setting more ambitious emissions-reduction targets.

What else you missed

Arctic animals adapting to climate change, but it may be causing population declines: A huge new archive of how animals move across the Arctic from season to season gives the clearest picture yet of how species from eagles to caribou are evolving in the face of climate change.

Canada could help supply ‘energy transition metals’ but faces stiff competition, observers say: Canada is well-endowed with copper, aluminum and nickel resources and could attract some of those investment dollars, says Julian Kettle, Wood Mackenzie’s vice-chairman of metals and mining, but it faces the same price-related issues as the rest of the world.

Leslie Cliff and Mike Thiessen: “Becoming more aware of the net impact of investments will enable all tiers of investors and decision makers to better align investments with their values and strive for a more positive overall impact on the environment and society.”

Renewable stocks have (a little too much) wind at their backs

John Heinzl: The presumed victory of Democratic presidential candidate Joe Biden, who has proposed investing US$400-billion in clean energy and climate research, has given these stocks another lift.

What readers had to say

Readers have already started to respond to our story this week about Environment Minister Jonathan Wilkinson defending his government’s record on climate action. Here’s what some had to say:

MMacK: “Given that we’ll be living with effects of current level of greenhouse gases in atmosphere for centuries, it would be smart to now take actions to mitigate those negative impacts.”

OldBanister: “The truth is that we have known that climate change would be an existential problem for the last 30+ years. In that time we have done basically nothing – other than increase oil output.”

Environmental Defence: “We’re also a G7 country with considerable international influence for our smaller population. What Canada does on climate has a major impact.”

Each week The Globe will profile a young person making a difference in Canada. This week we’re highlighting the work of Brenna Walsh, who is advocating for city-scale climate action.

My name is Brenna Walsh, I’m 32 years old and I’m a champion for city-scale climate action. Climate change is less daunting when we think at the scale of cities and communities – it engages citizens and allows people to see benefits on the ground.

I have been exploring how different stakeholders can come together to act and contribute their knowledge and expertise to the local climate story. I co-ordinated the writing of the Research and Action Agenda, which came out of the Cities and Climate Change Science Conference in Edmonton, 2018, and presented on new collaborative avenues for action in cities to address climate change to the Organisation for Economic Co-operation and Development (OECD) in summer of 2019.

I recently moved back to Halifax, and have gotten to zoom in on action specifically in the city where I grew up. I am helping local climate activists push for municipal action as the regional organizer in Atlantic Canada for Climate Reality Project Canada’s Community Climate Hub initiative. We have a lot left to do in this movement, but I try to remember that every action counts to effectively address the climate challenge, from reducing personal consumption to transformative changes that we need to lobby governments for.

Do you know an engaged young person? Someone who represents the real engines pursuing change in the country? Email us at GlobeClimate@globeandmail.com to tell us about them.

Photo of the week

Catch up on Globe Climate

We want to hear from you. Email us: GlobeClimate@globeandmail.com. Do you know someone who needs this newsletter? Send them to our Newsletters page.