What GM is doing and why

Luis Potosi and Toluca for 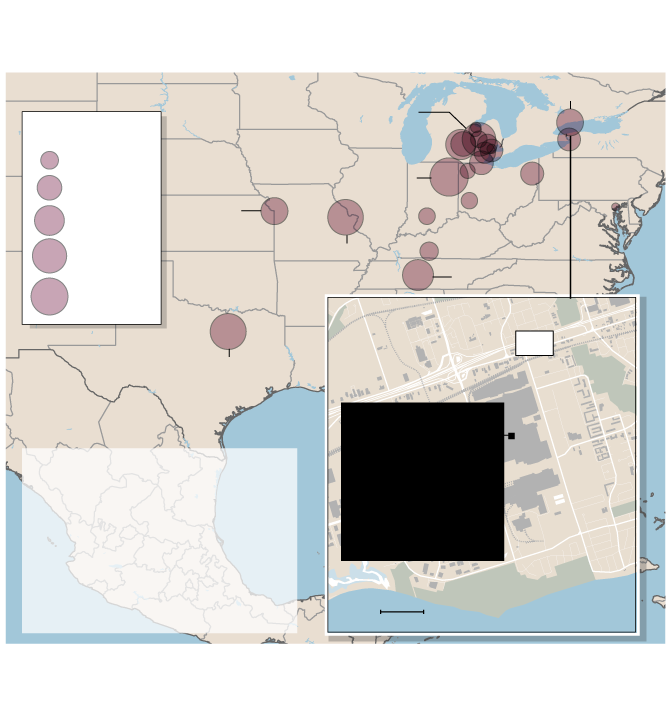 Luis Potosi and Toluca for 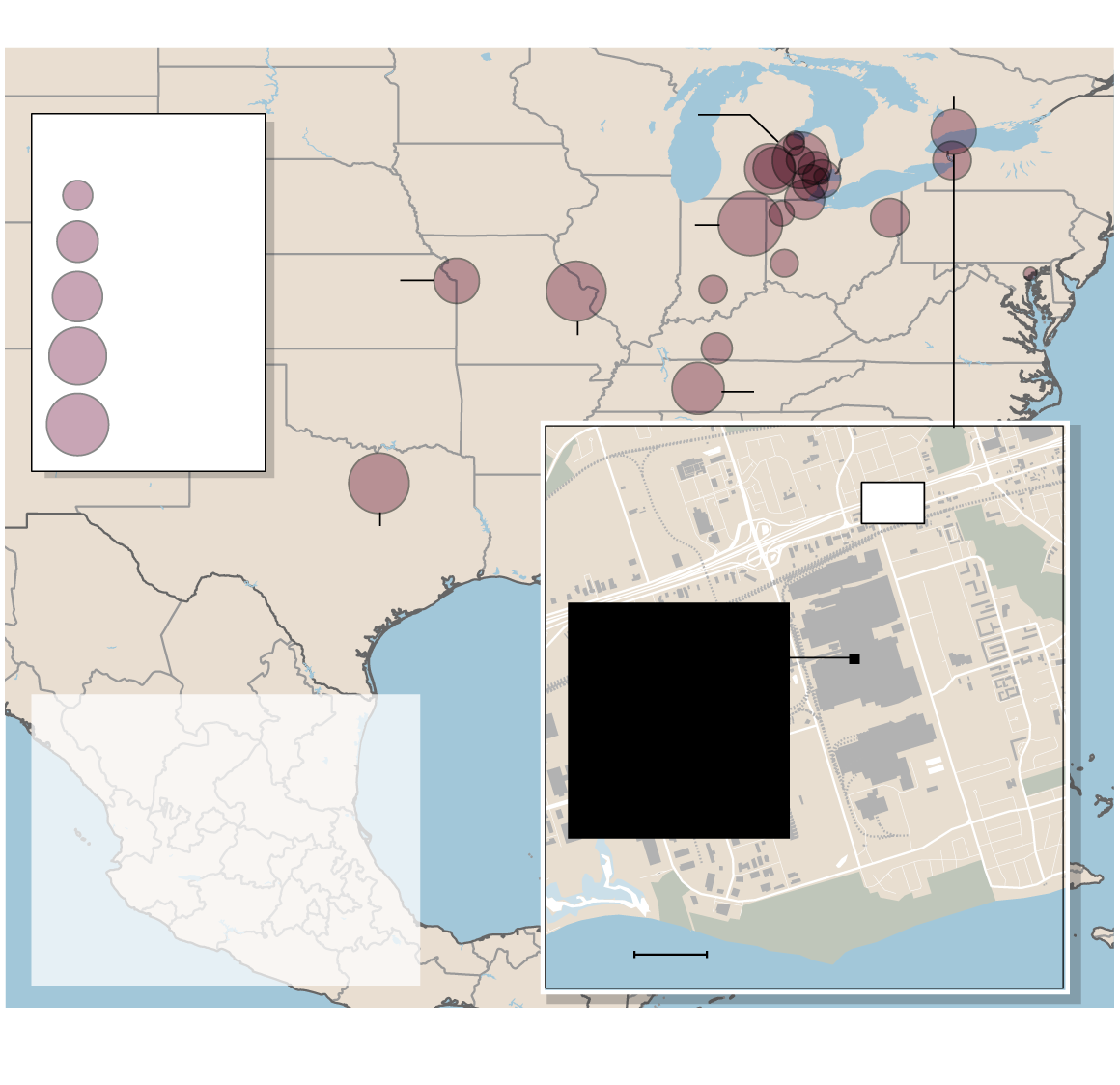 Potosi and Toluca for which

In a heated press conference Monday afternoon, president of Unifor Jerry Dias called the announcement a “betrayal," adding that “they are not closing our damn plant without one hell of a fight.” Canada’s largest private-sector union also urged GM to live up to the spirit of a 2016 agreement to save jobs in Oshawa by upgrading an assembly line. That deal, which averted a strike by GM workers, was hailed at the time by Mr. Dias as a commitment to prevent the plant’s closing in 2019.

Mr. Dias met with Mr. Trudeau on Tuesday to discuss the implications of the GM plant closing in Oshawa, saying the company has moved production of five models of vehicles to Mexico and the United States in the past few years, and if the Oshawa plant closes, the company will have only one left here. He says labour standards in Mexico are low and Trudeau has to work with Mr. Trump to keep manufacturing jobs from shifting south.

Federal: Prime Minister Justin Trudeau vowed Monday that Ottawa would offer help to affected workers and their families, adding that he told GM’s CEO he was disappointed in their move. Later Monday, Innovation Minister Navdeep Bains told a news conference in Ottawa that the Trudeau government is “more than willing to work with the province and work with the municipal leadership to see what we can do for the workers.” Mr. Trudeau later tweeted that he spoke to Ontario Premier Doug Ford and that they are “united in support” for workers in Oshawa, Ont.

GM workers have been part of the heart and soul of Oshawa for generations - and we’ll do everything we can to help the families affected by this news get back on their feet. Yesterday, I spoke with @GM’s Mary Barra to express my deep disappointment in the closure.

I had a good call with Premier Ford today – we’re united in support for workers in Oshawa, and we’ll work together to do everything we can to help the people and communities affected.

Provincial: The Ontario government will bolster unemployment insurance coverage, from 45 weeks to 50, in all regions affected by the plant closing, Mr. Ford said Monday. He also said he asked GM in a phone call if there was anything Ontario could do to keep the Oshawa plant open, and was told it could not.

Today is a difficult day for GM workers in Oshawa, their families and those impacted through the wider supply chain. We will always stand with you. We have actioned immediate supports, and will work with our federal and municipal partners to support you.https://t.co/54deWGBQYE

GM didn't build #Oshawa. Oshawa built GM. If it is true that @GMcanada is abandoning us, then they are in for a fight. Autoworkers & families deserve better than rumours. The Govt better be figuring out a plan... #MadeInOshawaMatters #community pic.twitter.com/wVELqWO7oe

Municipal: Oshawa Mayor John Henry said he had not spoken to anyone from GM. He said he heard about the reported closing from CTV News, which first reported the story, when a reporter called him for comment earlier in the day. In a phone interview with The Canadian Press, he said that the plant closing would have ripple effects well beyond the city:

Presidential: U.S. President Donald Trump said on Monday he was not happy with GM’s decision to idle the plant in Ohio, a state where, at a rally a year earlier, he famously promised that factory jobs were “all coming back. Don’t move. Don’t sell your house.” On Monday, Mr. Trump said GM had “better put something else” in the state. He also told the Wall Street Journal GM should stop making cars in China and make them in the United States instead. He said he told Ms. Barra to “get a car that is selling well and put it back in” Ohio. Tuesday, more than 24 hours after the official announcement, Mr. Trump tweeted his disappointment, saying the government is looking at cutting all GM subsidies.

....for electric cars. General Motors made a big China bet years ago when they built plants there (and in Mexico) - don’t think that bet is going to pay off. I am here to protect America’s Workers!

Congressional: In Ohio, both Senate and House politicians denounced the move as corporate greed, and some took direct aim at Mr. Trump. Democratic Representative Tim Ryan, whose district includes Lordstown, said in a statement the community deserves accountability from the President:

The [Mahoning] Valley has been yearning for the Trump Administration to come here, roll up their sleeves and help us fight for this recovery. What we’ve gotten instead are broken promises and petty tweets. Corporations like General Motors and the President himself are the only ones benefiting from this economy – an economy rigged against workers who are playing by the rules but still not getting ahead.

Oshawa and GM: A history

Video: Get caught up on General Motors's 100-year history in Oshawa, and how it became one of the world's largest assembly plants.

The news of GM scuttling the Oshawa plant comes 100 years after the U.S. auto-making giant first landed in the community, acquiring the McLaughlin family’s car-manufacturing business in 1918.

The McLaughlins had started making horse-drawn sleighs and carriages in the 19th century and switched to Buick and Chevrolet production in the 1900s. Sam McLaughlin was made the first president of General Motors of Canada Ltd., and under his tenure the company grew quickly, with Oshawa as the export manufacturing base supplying the British Commonwealth. When the car boom of the mid-20th century came, Oshawa was poised to take advantage of the growing demand. By the 1980s, the GM Autoplex was one of the planet’s largest car assembly plants and employed 23,000 people.

Even before the 2007-08 financial crisis, GM had been whittling down its operations in Oshawa, scuttling one of its plants in 2005 and cutting 3,750 jobs. Then disaster struck: The recession sent car purchases plummeting, oil prices rose and GM’s Canadian production shrank.

General Motors Corp. filed for bankruptcy protection in 2009. A multibillion-dollar bailout made the U.S., Canadian and Ontario governments part-owners of the company. More cuts came under the so-called Government Motors era, and thousands more jobs were lost when Oshawa’s consolidated plant was closed. In all, Ottawa gave $7.23-billion to GM, and the province $3.6-billion, and when both governments unloaded their GM shares in 2015, they lost about $3.5-billion on their taxpayer-funded investment.

More reading: A history of General Motors in Canada

What will GM do next?

GM’s market share has been in decline, and its share of Canadian light-vehicle production has never recovered to its levels from before the 2009 bankruptcy. With demand waning for traditional sedans, all auto makers are under pressure to change the kinds of vehicles they make. GM is now beginning what is expected to be a long and expensive transition to an entirely new business model, one that embraces electrified and automated vehicles, many of which will be shared rather than owned.

Moving into the electric market will be a costly and painstaking process, The Globe’s Ian McGugan explains: Analysts predict auto makers will need to invest heavily to develop the technologies they need. The industry is still profitable for now, but U.S. economic growth is slowing and consumers are expected to buy fewer cars in the future. GM’s cost-cutting may help them to clear those hurdles and enter an electric future, but as Mr. McGugan writes, it “also underlines doubts about whether the industry can return to robust health.”

What will Oshawans do next?

Losing thousands of jobs will shake the economic balance of Oshawa, a town of 166,000 that’s been trying to grow out of its postindustrial malaise. Public infrastructure projects and a real-estate boom for Ontarians priced out of the Toronto market have improved the city’s fortunes in recent years, but GM remained the city’s No. 1 private-sector employer.

The town is also grappling with pervasive problems of economic inequality that the loss of GM jobs can only make worse. Oshawa’s downtown unemployment rate is nearly twice its region’s average, and there are pockets of deep poverty and homelessness in its inner suburbs. Earlier this year, The Globe’s Marcus Gee took a deeper look at Oshawa’s two realities in a tour of “Tarp Mansion,” an encampment for homeless people by a local creek, where anti-poverty activists spoke with him about the growing disparity between the haves and have-nots.

Sunil Johal: GM’s closing is a warning shot: Canada’s not ready for the age of disruption

Editorial: No bailout can save Oshawa from GM's hard reality

Barrie McKenna: On the GM bailout, we got what we paid for

With reports from Josh O’Kane, Eric Atkins, Robert Fife, Reuters, Associated Press and The Canadian Press, and reporting from The Globe and Mail archives by Greg Keenan, Thandiwe Vela and Marcus Gee