Jean Peloquin still hadn’t finished renovating his house from the last flood in 2017 when the river swept in and dumped more than a metre of water in his basement.

The repairs, which include building a new front porch and installing a waterproof foundation, were interrupted by another season of spring flooding.

“We haven’t finished with the first flood and we’re already into the second,” Peloquin said Wednesday.

Related: Poor flood-risk maps, or none at all, are keeping Canadian communities in areas prone to flooding

Peloquin’s usually idyllic street in Rigaud, 70 km west of Montreal, was more suited to the ducks and muskrats that swam freely in the water that filled the neighbourhood.

But despite another flood coming so soon, Peloquin said he’s not ready to think about leaving the big blue house by the water.

“I have no desire to move yet,” he said. But a moment later, he added: “But everything has a price.”

As they grapple with their second bout of major spring flooding in three years, some Quebecers may soon have to contemplate what previously must have seemed unthinkable: leaving their homes.

Quebec’s Public Security Department said as of 2 p.m. Wednesday, about 1,900 homes across the province were flooded and 515 people have been forced to leave.

Authorities said rain forecast for the coming days and melting snow could further raise the water levels in the region between Gatineau and Montreal.

He said starting this year Quebec will cap compensation at $100,000, and once that is spent, up to $200,000 thereafter for people to abandon their homes if they face future flooding.

On Peloquin’s street some of the houses sat in a metre of water. Others were protected by sandbag walls. One resident had turned his home into a mini fortress, with an elaborate wall of boards and tarps that encircled deep piles of loose sand.

The 65-year-old said area residents are used to some annual flooding, although not to these levels.

“We accept the risk because it is worth it,” to live so close to nature.

So for now, he’s not looking at moving. It would take a much better offer to convince him to move from “paradise.”

Another resident, Jacques Gagnon, said he was too busy dealing with flooding to think about the future.

“No decision has been made,” he said.

Carole Lague, who also lives on the street, said she believes the frequent flooding shows the need for long-term planning.

“I think we need to have collective intelligence and come up with good solutions, because this is a situation that will happen time and again,” she said as she trudged through knee-high water.

She said she and her husband weren’t thinking about moving, noting they aren’t eligible for compensation since it’s a secondary residence.

On Wednesday, Prime Minister Justin Trudeau warned that cities across Canada will experience more frequent flooding because of climate change and governments need to adapt to this new reality.

“We’re going to see more and more of these extreme weather events more regularly,” he said during a visit to an evacuation centre in the city of Gatineau.

“It means we have to think about adaptation, mitigation and how we are going to move forward together.”

Will Amos, the Liberal MP for the Gatineau area, said the flooding shows a national discussion is needed on how to deal with rural climate-related events.

“Rural communities continue to be challenged in their response to climate-related disasters, whether it is floods, fire, or otherwise,” he said.

Fifty km east of Rigaud on Ile-Mercier, a small island whose only bridge back to Montreal has been closed due to flooding, resident Sonia Brown appeared ready to consider moving on.

After her home was flooded in 2017, she inquired about moving but said she was told she could get much more compensation if she rebuilt, which she said didn’t make sense to her.

For now, Brown’s newly-renovated home is still dry, but if it floods, she said she’ll look at the government’s offer.

“How many times can you live through this anxiety?” she said on Tuesday.

“My heart pressure, I feel it, I don’t sleep, I’m not eating. Psychologically it’s not healthy.” 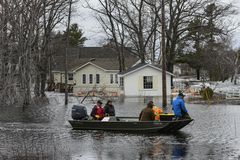 Bracebridge in Ontario cottage country declares state of emergency amid rising water levels
April 25, 2019
Poor flood-risk maps, or none at all, are keeping Canadian communities in flood-prone areas
April 26, 2019 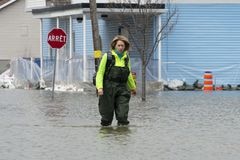