As the drums kept a steady beat and the sage smoke drifted past, the pallbearers carried Simon Fobister on his final journey: down a path to a quiet beach, and then by motorboat to an island grave.

The former chief of Grassy Narrows First Nation, whose funeral was on Saturday, had devoted most of his life to saving his people from the ravages of mercury poisoning – a crisis that remains unresolved today, more than half a century after an upstream paper mill began dumping tonnes of mercury into the river system.

Mr. Fobister died last week at the age of 63. The toxic effects of mercury were among the factors that contributed to his death, according to his family members and community leaders.

He died without knowing whether his community will succeed in persuading the federal government to accept his vision for a treatment centre to provide specialized treatment and palliative care for some of the hundreds of Grassy Narrows people who are believed to suffer from mercury poisoning.

Without the treatment centre, the victims of mercury poisoning are forced to leave their community for medical treatment or hospice care. Transportation costs are high, and it can be difficult for their families to visit. Many die in faraway hospitals in cities such as Thunder Bay, where Mr. Fobister died, about 550 kilometres from his home.

Negotiations over the design and budget of the treatment centre are stalled, according to Grassy Narrows leaders, and the plan could be jeopardized if there is no agreement before the expected federal election this fall.

Canadians were shocked by the first revelations of mercury poisoning at Grassy Narrows in the early 1970s, yet little was done. As recently as 2010, a Japanese scientist found that 59 per cent of residents who were examined in Grassy Narrows and the nearby Whitedog First Nation showed signs of mercury poisoning, and only a small fraction were receiving any compensation payments.

It took more than four decades for governments to respond with commitments on cleanup and specialized care for the mercury crisis. A long-awaited $85-million provincial cleanup plan is still in its early stages, with researchers still testing water samples on the English-Wabigoon river system.

Federal officials say the government remains “steadfast” in its commitment to building a treatment centre. But there are still substantial disagreements on the project, and Grassy Narrows leaders are worried. Only a few weeks remain before the election is to be called.

The promise to build a treatment centre was made in 2017 by Jane Philpott, the minister of Indigenous services at the time. The community is concerned that her successor, Seamus O’Regan, might not fulfill the promise – or that it could be abandoned after the election, especially if the Liberals are defeated.

Based on a federally funded study, Grassy Narrows leaders are seeking a $19.5-million, 22-bed treatment centre, along with a trust fund to ensure that its operating costs are covered. They say the government wants to cut the construction cost by nearly $10-million by offering a basic hospital-style design with smaller rooms, while providing only one-quarter of their estimate of the annual operating cost.

“I’m deeply disappointed and discouraged,” said Rudy Turtle, chief of the Grassy Narrows First Nation, in an interview with The Globe and Mail.

“After what’s happened in the past 50 years, this should be one of the federal priorities, and they shouldn’t be worrying so much about the money.”

William Olscamp, a spokesperson for Indigenous Services, said the department believes it is making progress toward an agreement on the treatment centre.

“We recognize that the community of Grassy Narrows has been affected by mercury in the English-Wabigoon river system and suffers health issues to this day,” he told The Globe in a written statement.

“We will continue discussions on this with community leadership until we reach a consensus,” he said. “We will get this facility built.”

At the funeral on Saturday, hundreds of people crowded into a small wooden church to pay their respects to Mr. Fobister. Outside the church, a sacred fire had been burning for 24 hours, its smoke symbolically accompanying his journey. Later, a smaller traditional ceremony was held near the river, before his coffin was placed on the motorboat.

At the ceremony, community elder John Fobister praised the former chief for his tireless work in securing compensation payments for some of the mercury victims. But despite his efforts, the Japanese study in 2010 found that 74 per cent of those with diagnosed or suspected mercury poisoning were still not receiving any compensation.

As the boat carried Simon Fobister’s coffin to the island where he will be buried in a family grave site, his grandson Justin Fobister stood on the riverfront with tears in his eyes, wearing a T-shirt that read: “PM Trudeau: will you compensate us for the mercury crisis?”

The same slogan was on a banner waved by two protesters at a Liberal Party fundraiser in March. The protesters were escorted out, and Prime Minister Justin Trudeau sarcastically thanked them for their “donation.” He later apologized, acknowledging that his response had “lacked respect.”

Another former Grassy Narrows chief, Steve Fobister, died last year at the age of 66. He, too, had suffered neurological symptoms of mercury poisoning for decades.

“They’re all going, way too young,” Simon Fobister’s sister Mabel said at the funeral on Saturday. “And now we’re worried about the kids, the younger generation.” 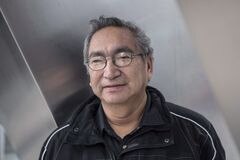 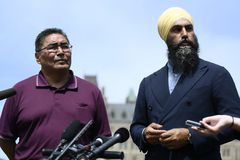 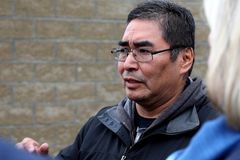