In a year when politics feels very personal, new Green Party Leader Annamie Paul has stories few other politicians in this country can tell.

For instance, the first Black woman elected to lead a Canadian political party, remembers, precisely, the three times in her life when she was called the N-word. Once, near a theatre in Ottawa while she was working on her law degree, by skinheads who left her alone when they realized she was a woman; another time, while studying for a master’s at Princeton University by a drunk student on the street, and then, only a few months ago, by an unidentified man who Zoom-bombed the party’s leadership debate just to shout the slur at her.

As the daughter of Caribbean immigrants, she has the narrative of her smart, feisty mother, who came to Canada as a teacher in the 1960s and had to work as a housekeeper when her credentials were doubted. Her mom, she recounts, went on to earn her education degree for the second time, and would later take her daughter on the bus to union rallies, educating her about the importance of fighting for fair benefits and equal treatment. “It was ingrained in me at a young age, this power of collective action," Ms. Paul says.

With Annamie Paul, the Greens decide to compete for votes, and seats

And then there’s another story, one so many Canadians can also tragically tell. In May, her elderly father, a resident of a long-term care home, died of a treatable bladder infection that advanced into a fatal case of sepsis – the result of an improperly placed catheter, left too long at a time when, because of the COVID-19 pandemic, his family was unable to visit him. He was an indirect victim of the pandemic, she said. But she was luckier than most, she noted: because he died in hospital, she was able to say goodbye.

When she discussed the pandemic, racism and immigration, these stories framed her answers. On the phone the day after her Saturday win, she spoke eloquently about “corners that are cut" when profit drives health care and the changes required for long-term care; the need to improve recognition of foreign credentials so Canada can benefit from talented immigrants, such as her mother; the importance of working with international partners on issues such as climate change; and about how having Black and Indigenous people at the table when you’re creating policy – for instance, around policing – means “you’re far less likely to make bad decisions.”

Ms. Paul, who is Jewish, has also been outspoken about the anti-Semitism she experienced from within the Green Party during the leadership race, even as she became the fundraising front-runner.

On Saturday, she won in the eighth round of voting by 2,000 votes, defeating Dimitri Lascaris, a Montreal lawyer who billed himself as an “eco-socialist,” as well as Glen Murray, a former Liberal Ontario cabinet minister who finished fourth.

She has mixed feelings about her milestone first – in particular, why did it take so long?

But beyond breaking barriers, Ms. Paul, a 47-year-old lawyer with degrees from the University of Ottawa and Princeton, brings a strong resumé to the job. She speaks four languages – English, French, Catalan and Spanish. She was recruited by Global Affairs out of school, and moved first to Brussels with her family, and then working in Barcelona, time that, she says, gave her an appreciation for learning from the experience of other countries.

In Canada, she has worked to improve political representation for women and minorities, staying out of partisan politics until the 2019 federal election, when she lost to then finance minister Bill Morneau in Toronto Centre. This is the same riding she hopes to win in a by-election in a few weeks.

A mother of two, she jokes that during the pandemic, her family – like so many – learned the pros and cons of forced togetherness. Her eldest son, Malachai, 20, had to return home from the United Kingdom where he was studying, and her husband of 24 years, Mark Freeman, an international human-rights lawyer, was unable to travel for work as he usually does.

Together, with her 16-year-old son, Jonas, they all helped with her campaign. “We’re now extremely bonded as a family while at the same time I am telling you that we are sick of the sight of each other," she laughed. Quips aside, Saturday’s celebration was bittersweet – during her acceptance speech on Saturday, she left her phone on at the podium, so her mom and extended family, who were unable to attend because of the pandemic, could still be part of the moment.

As she prepares for her next challenge – winning a seat in Parliament to join the three other Green MPs – she reflected on a phrase that she learned from her husband, who works with countries transitioning out of civil war. She recalls discussing how to know if the current protests and rallies for equality would actually lead to real change.

“He said, it’s when you turn that opposition into proposition,” she explained. “And so, in my case, that’s where politicians come in.”

Editor’s note: An earlier version of this story incorrectly said Annamie Paul was the fourth woman to lead a political party in Canada. 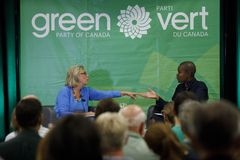 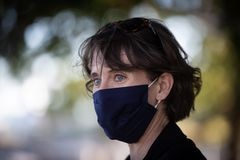 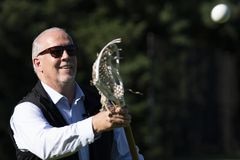