Members of Muslim and anti-hate groups in Canada are calling upon authorities to ensure the killing of a mosque volunteer is also prosecuted as a hate crime or as a terrorism offence.

In a slaying drawing comparisons to the 2017 Quebec City mosque massacre, a 58-year-old was killed on Sept. 12 by an intruder who entered and left Toronto’s International Muslim Organization (IMO) mosque on Rexdale Boulevard.

Witnesses to the aftermath say Mohamed-Aslim Zafis had his throat slit while he was minding the entranceway to ensure the congregation was taking precautions against COVID-19. Six days later, on Sept. 18, a 34-year-old was arrested on first-degree-murder charges.

The accused has not been charged with any hate crimes or terrorism offences. Such charges are notoriously difficult to prove in court because police and prosecutors first need to know what was in a suspect’s mind at the time of a crime.

But during a Saturday night vigil held at the mosque in memory of Mr. Zafis, a Muslim leader said anyone who came upon the crime scene’s aftermath could have no doubt about the motivation.

“We had to look upon a sight that no one should ever have to look upon,” Mustafa Farooq said. “Let me be clear: A man came to this mosque. He murdered our brother Mohamed-Aslim Zafis by slitting his throat.”

The chief executive of National Coalition of Canadian Muslims, Mr. Farooq said police across Canada need to take stronger steps to dismantle white-supremacist organizations. “We are further asking the Toronto Police Service to carry this investigation forward as a potential hate-motivated crime,” he said.

A police official who also spoke at the vigil said authorities will try to lay hate-crimes charges – if the evidence supports this. “We are continuing to look at that,” Superintendent Ron Taverner told the crowd. “We’ll leave no stone unturned.”

The attack in Toronto recalls the events of January, 2017, when a gunman in Quebec City stormed a mosque and killed six people while injuring several others for life.

Last year, that killer – Alexandre Bissonnette – was given a life sentence with no chance of parole for 40 years. A judge found that his actions were “motivated by visceral hatred for Muslim immigrants.”

That sentence stands among the stiffer punishments in Canadian criminal-justice history. Yet many observers still find it unsatisfying because prosecutors did not also seek to prove that the mass-killing of Muslims is also terrorism or a hate crime.

The laying of such charges, observers say, could help highlight how hate groups have become a top-tier violent threat in Canada.

“I think the police and the Crown need to recognize it’s not just about choosing the easiest charges that will stick,” said Evan Balgord of the Canadian Anti-Hate Network.

From his perspective, the Toronto case has the potential to set some legal milestones. “They could pursue it as terrorism or hate crime – and either would fit.”

The suspect charged with Mr. Zafis’s murder at the Toronto mosque has a unique name – Guilherme (William) Von Neutegem. Social-media accounts linked to that name highlight a recurring interest in the occult. His YouTube account posted a black-and-white video titled “Chant” this year that features a symbol resembling one often affiliated with a fringe extremist group known as Order of Nine Angles.

His YouTube playlists highlight conspiracy theories and a documentary titled Hitler’s Monsters: A Supernatural History of the Third Reich. His Twitter describes the global coronavirus response as a "Framework and plataform [sic] for World Government. "

Police in Toronto would not comment on the accounts.

“Investigators are not confirming any online profiles at this time,” said Meaghan Gray, a spokeswoman for the force.

She added that “if we discover evidence that may suggest the murder was motivated by hate, that information would be shared with our hate-crime investigators and Crown attorneys.”

Meantime, fears about hate groups are mounting in the United States.

Last week, Federal Bureau of Investigation Director Christopher Wray told Congress that “the greatest threat we face in the homeland is that posed by lone actors radicalized online who look to attack soft targets with easily accessible weapons.”

Places of worship are a preferred target of such attackers, the FBI Director said. 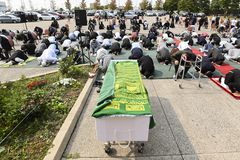 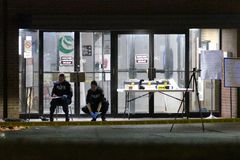