A B.C. hiker who was shot several times along a trail three years ago is suing Canadian Tire, alleging the retailer sold the semi-automatic rifle used in the shooting to a man with an expired firearms licence.

A report in Saturday’s Globe and Mail gave Cameron Rose’s account of being shot by a gunman shortly after pulling over on a remote mountain road for a nap on March 25, 2017.

Peter Kampos is facing a charge of attempted murder. He is also named as a defendant in the lawsuit.

The claim alleges Canadian Tire was negligent in failing to ensure that Mr. Kampos was legally permitted to buy a TNW Aero Survival Rifle from a store in Terrace, B.C., on March 23, 2017.

“This wouldn’t have happened if they had checked his licence properly,” said Naz Kohan, lawyer for Mr. Rose. “When you’re going hiking you don’t expect to be shot.”

During the criminal trial, prosecutors have referred to an affidavit from firearms officer Simon Li stating that Mr. Kampos’s possession and acquisition licence (PAL) expired on Dec. 6, 2012, 107 days before receipts show he purchased the rifle.

A Canadian Tire clerk recorded the expiry date as “20/12/01,” according to a store ledger. It’s unclear where that date came from. The Canadian Firearms Program had received an application from Mr. Kampos for a new PAL, but no new permit had been issued at the time of the shooting.

Canadian Tire spokeswoman Joscelyn Dosanjh said the company would not comment on the lawsuit while it remains before the courts.

In a response filed in B.C. Supreme Court, the company denies it sold the rifle to Mr. Kampos, but states that if it did then “Kampos presented what appeared to a reasonable observer to be a valid Possession and Acquisition License.”

Ms. Dosanjh said the RCMP investigated the Canadian Tire sale and laid no charges. She added that the chain now requires employees to verify permits through an RCMP website prior to any firearms transaction.

The Aero Survival Rifle is classified as non-restricted in Canada, a broad category that includes most common long guns, except those recently prohibited by the Liberal government. Under current regulations, gun stores can only sell non-restricted firearms to valid PAL-holders. If they have any suspicion about the validity of the licence, they can call the RCMP’s Canadian Firearms Program for central verification, but it is not obligated.

“If you as a seller look at a licence and it’s expired, then you would have reason to believe that the person is not authorized to acquire the firearm, and you would be committing a crime by transferring it,” said criminal lawyer Solomon Friedman, who specializes in firearms cases but has no involvement in the lawsuit.

A spokeswoman for the RCMP has said the force will not speak publicly about the case while it remains before the courts.

Legislation passed by the Liberal government last year would require gun sellers to verify PALs with the RCMP before completing sales of non-restricted firearms. The provision has yet to come into force, according to the RCMP.

On March 25, 2017, Mr. Rose pulled over on a mountain road for a quick nap before a hike when the alleged gunman approached in a blue Dodge Caliber.

When Mr. Rose started his car to leave, he began taking gunfire from the Dodge. Mr. Rose managed to manoeuvre past the Dodge and drive down Chilliwack Mountain Road, stopping when he saw a group of Canadian Forces soldiers outside a military firing range.

The soldiers treated bullet wounds to his shoulder, torso and face before paramedics and police arrived. Mr. Kampos was found and arrested later that day.

His subsequent trial has been delayed because of concerns about his mental fitness. Court documents show he had been diagnosed with schizophrenia before the shooting.

Three years ago, loopholes in Canada’s gun laws paved the way for a highway rampage in B.C. Why has nothing changed?
August 8, 2020 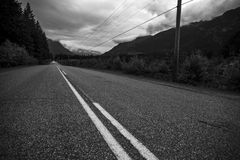