Starting Monday, stricter gathering limits will enter into effect for the next four weeks, until Dec. 21, across most of Halifax and parts of its regional municipality, Premier Stephen McNeil told reporters. Five people instead of 10 will be allowed to gather in a close social group without physical distancing, while households can have a maximum of five visitors at one time.

“We are at a critical point in our province – if we don’t act now it may be too late,” McNeil said. “That’s why we are taking a targeted approach in the central zone to contain this virus here and slow the spread.” The province reported five new cases Friday, bringing the number of active cases to 28. The new infections are all in the central health zone, which includes Halifax.

In most parts of Halifax, limits for informal social gatherings outdoors and indoors will be reduced from 50 to 25 people. Indoor events run by a recognized business or organization will be allowed to operate at 50 per cent of the venue’s capacity and hold a maximum of 100 people, down from 200.

McNeil also said staff who work at bars in the Halifax area will be tested over the next seven days, starting early next week. Restaurants and bars across the province will be required to collect information from their patrons.

Gatherings at long-term care homes across Nova Scotia will be reduced from a maximum of 10 people to five, and adult day programs for seniors who live in the community will not be allowed.

Dr. Robert Strang, chief medical officer of health, said the measures are aimed at preventing further community spread of the virus. “While travel sparked our initial cases it is now social activity that is fanning the flames and causing the virus to circulate more widely,” Strang said. “I am worried about the potential for this situation to snowball.”

Auburn Drive High School in Cole Harbour and its family of eight elementary and junior high schools were closed Friday to allow for cleaning, after a second case was reported at the high school. Health officials said the case involved a close contact of an earlier reported case at the school.

As a result, McNeil said Auburn Drive and Graham Creighton Junior High in Cherry Brook, where a case was reported earlier in the week, will be closed until Dec. 7. “We are doing this as a precautionary measure, but the reality is we have COVID in these two schools and in the surrounding communities,” the premier said.

Nova Scotia has reported 51 COVID-19 cases so far in November. Aside from the high school case, officials said three of the new cases were still under investigation. The remaining case, they said, was determined to be connected to a previously reported one.

Meanwhile, neighbouring New Brunswick also announced new restrictions Friday as it reported nine more cases of the virus – seven in the Saint John region and two in the Moncton area. The province now has 51 active cases.

Dr. Jennifer Russell, chief medical officer of health, said 600 people were currently self-isolating across New Brunswick, including 300 in the Saint John area alone, where infections had doubled in the past 48 hours.

Russell said the province was moving the port city from the yellow alert stage to the more rigorous orange alert and was asking people to limit contacts to their own family bubbles. “It is vitally important that everyone in zone two reduce their close contacts and follow all public health guidance,” Russell said. “This is a virus that will spread exponentially if unchecked.”

Premier Blaine Higgs said it was important to get the outbreak in the Saint John region under control quickly or it might be necessary to move at some point to the red alert stage.

In Newfoundland and Labrador, officials reported three new cases of COVID-19 on Friday, bringing the total active case count up to 13.

Officials said one of the cases was travel related and involved a man who returned to the province from Nova Scotia. They said the second case was a close contact of a previously reported infection in the Grand Bank area, and said the source of the third case is currently under investigation.

Trudeau urges Canadians to do everything in their power to reverse COVID-19 trajectory
November 20, 2020 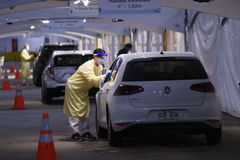 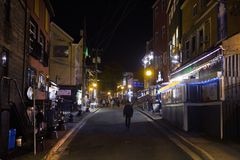