A man acquitted of charges related to his gunning down an alleged car thief outside his Hamilton-area home still faces a civil lawsuit that alleges he behaved negligently.

In an unproven statement of claim, the spouse and two children of Jon Styres allege that Peter Khill, of Binbrook, Ont., meant to injure or kill their relative.

“The defendant did not attempt to contact the authorities prior to confronting Jon Styres,” the suit states. “During the confrontation, the defendant – suddenly and without warning – shot Jon Styres multiple times, ultimately resulting in Jon’s death.”

In their suit, Lindsay Hill, their daughters Zoey Styres, who is almost three years old, and Sophia Styres, 4, all of Ohsweken, Ont., on the Six Nations reserve, claim damages suffered for the “negligent infliction” of mental distress and psychological damage caused by Khill’s actions.

Unlike the criminal case in which the prosecution was required to prove the charges against the accused beyond a reasonable doubt, the civil proceedings only require proof on a balance of probabilities – a lower threshold.

On Wednesday, a Superior Court jury in Hamilton found Khill, 28, not guilty of second-degree murder.

It’s not clear whether the Crown would try to appeal the acquittal but Styres’ lawyer, Robert Hooper, said the jury’s verdict did not affect the civil suit because Khill confirmed he shot Styres.

“The claim pleads both an intentional act and a negligent act,” Hooper told The Canadian Press. “We will look at his testimony and decide how to proceed.”

Khill had argued in his own defence that his four years of training as an army reservist kicked when he instinctively grabbed a shotgun and went outside to confront a potential intruder or intruders in the early morning hours of Feb. 4, 2016.

Evidence was that within seconds of spotting a shadowy figure leaning into his 15-year-old pickup truck parked in the driveway, Khill fired twice from a couple of metres, one shot hitting Styres squarely in the chest, the other passing through the back of his arm and into his chest. Styres, 29, died minutes later.

Only after the shooting did Khill’s then-girlfriend, now his wife, call 911, court heard.

“The incident was caused in whole by the intentional actions of the defendant which consisted of shooting Jon Styres with the intention to cause injury or death,” the suit alleges.

Contrary to the evidence heard during the criminal trial, the lawsuit alleges Khill fired with the intention to kill as Styres fled the property. The court heard no evidence that Styres was attempting to flee or had any time to do so.

None of the civil suit allegations, filed in January in Superior Court, has been proven.

Khill’s criminal lawyer, Jeffrey Manishen, did not immediately respond to a request for comment, while his civil lawyer said no statement of defence had been filed. 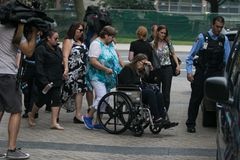 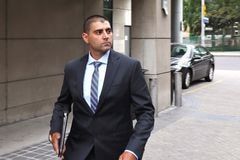 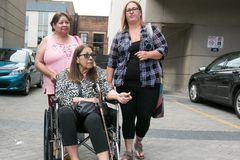