Police are investigating the targeted killing of a 43-year-old man at his Hamilton home Wednesday as a potential mafia hit – the city’s third such slaying in two years, and the latest sign of an escalating power struggle within Canada’s criminal underworld.

Cece Luppino, 43 – the son of alleged Mafioso Rocco Luppino and the grandson of late ‘Ndrangheta boss Giacomo Luppino – was gunned down at his family’s home on the Hamilton escarpment Wednesday evening.

It was just before 6 p.m. that police were called to 56 Mountain Brow Blvd., after a family member returned home and discovered the 43-year-old’s body. He was pronounced dead at the scene.

The Luppino family name is notorious in Hamilton, and holds great prestige in the broader world of organized crime in Canada.

Rocco Luppino and his brother Natale Luppino are both “made” members of Buffalo’s Todaro crime family, with Rocco holding the title of captain, according to court documents filed in a recent cross-border mafia takedown; a bust that landed two of their nephews, Domenico and Giuseppe Violi, in prison for drug trafficking.

Domenico Violi, a 52-year-old hardwood floor and pasta salesman, had recently been made underboss of the Todaro family, according to the court documents. In this new role, he was to “assume control over the operations of the Luppino-Violi crime family and solidify his power base with further and greater collaboration with the New York-based Mafia families.”

According to wire transcript excerpts in that case, Giuseppe Violi told an associate – who, unbeknownst to him was a police agent – back in February, 2015, that Cece Luppino had been approached about becoming a “made” member.

“Cece told his dad if he could make money then he would be involved, if no money than he doesn’t want to be involved; that there are too many headaches,” the wire transcript excerpt from their conversation reads. “[Giuseppe] Violi stated that Cece told his father he watched his father struggle for 30 years, and that Cece does not want to struggle for 30 years; and if he does have to then he doesn’t want it.

Hamilton Police Detective Peter Thom said Thursday that Mr. Luppino, who was recently married, had no criminal record and was not known to police beyond his familial ties.

Property records show that the home at 56 Mountain Brow Blvd., as well as the home next door, are both owned by his parents.

“All I can say is we’ve been told [Cece] worked for a family business down in Stoney Creek,” he said – specifically a realty business and a café.

“That’s about all we know at the moment. We’re obviously doing some research, victim background, to see if there’s any motive that we can develop that way.”

While he was careful to stress that police are considering all possibilities, Det. Thom acknowledged that the “nuances” of the attack on Mr. Luppino – and the close-up style of the killing – suggest it was targeted.

“We don’t know what the motive is but that’s certainly an avenue that we’ll keep open.”

Wednesday’s shooting is the latest in a string of mafia-tied homicides and firebombings across the Greater Toronto and Hamilton area over the past several years. In Hamilton alone, it is the third such slaying in the past two years.

Notorious mobster Angelo Musitano was executed in his Waterdown driveway in May, 2017. His brother Pat Musitano’s home was shot at the following month.

In September, 2018, Albert Iavarone – whom Hamilton Police have said was “very close” to a person of interest in Mr. Musitano’s murder – was shot and killed in his own driveway.

One man – Jabril Hassan Abdalla, 27 – has been charged in Mr. Musitano’s murder, and warrants have been issued for the arrest of two others – Michael Cudmore and Daniel Tomassetti – who are believed to have fled to Mexico.

In addition to the hit on Mr. Musitano, these three men are also alleged to be responsible for the murder of Mila Barberi, who was struck by bullets intended for her mob-affiliated boyfriend Saverio Serrano in Vaughan, Ont., in March, 2017.

Hamilton Police Detective Peter Thom has said that these men are believed to have been hired hitmen, and that police are still investigating the “masterminds” behind those shootings.

Det. Thom said it was too early Thursday to say whether Mr. Luppino is linked to Mr. Musitano or Mr. Iavarone.

He said the Luppino family is co-operating with police.

Opinion
Canada’s money-laundering problem may be much worse than imagined
January 25, 2019 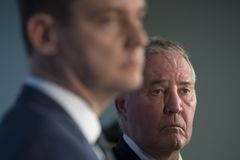