The Montreal Canadiens could seemingly do no wrong Friday night.

They scored early and often in a 5-0 demolition of the Flyers that saw star goalie Carter Hart chased from Philadelphia’s crease in a mercy pull.

That was then. And for Canadiens fans, it probably feels like a lifetime ago.

Now after two anemic offensive performances, Montreal is on the cusp of having its playoff bubble burst.

Hart made 29 saves for his second straight shutout as the Flyers smothered the Canadiens for the second time in less than 48 hours to pick up a 2-0 victory Tuesday and grab a 3-1 stranglehold on their first-round series.

Montreal — which played that near-perfect Game 2 to even the matchup 1-1 — was bested by Hart’s 23 saves, 24 blocked shots, three posts and two crossbars in Sunday’s 1-0 loss. It was more of the same Tuesday for a team that has now been blanked for 129 minutes 25 seconds dating back to Jesperi Kotkaniemi’s goal midway through Friday’s third period.

“Our backs are against the wall,” said Canadiens captain Shea Weber, whose team will look to avoid elimination in Wednesday’s Game 5. “We’ve got to take our lumps here and correct a few things.

“[We’ve] definitely got to come with our best effort.”

That effort wasn’t there at times Tuesday as the Flyers once again scored early and then locked things down. A bad goal on Carey Price, who finished with 20 saves, late in the second period forged a lead that felt insurmountable.

“We just have to put this behind us,” Montreal winger Tomas Tatar said. “It’s not pretty when you don’t score for two games.”

Michael Raffl and Philippe Myers provided the offence for Philadelphia, the No. 1 seed in the Eastern Conference.

Searching for any type of spark in what would be another fruitless third period, Canadiens interim head coach Kirk Muller put his lines in a blender, benching Brendan Gallagher and Jonathan Drouin for long stretches.

Montreal’s leading scorer the past three years, Gallagher has failed to find the net in the postseason despite coming in with a league-high 31 shots.

“[The frustration’s] there. You just have to do your best to fight that urge,” he said. “You play for one reason — you play for teammates. Regardless of what’s happened, I’ve got to find a way here, and whenever you’re out on the ice just take advantage of it. I guess if the coach feels other guys are going to do the job better than you, that’s his job.

“It doesn’t mean I sit there and accept it, but my job is to play.”

The 24th of 24 teams included in the NHL’s resumption to its pandemic-delayed season, the Canadiens haven’t helped themselves much over the last two games.

And Price, who’s been mostly brilliant in this series and in Montreal’s stunning upset of the Pittsburgh Penguins in the qualifying round, wore the goat horns with his team behind and struggling to create Tuesday.

Up 1-0 after the opening 20 minutes, the Flyers doubled their lead with 2:56 left in the second when Myers’ shot from the sideboards clipped the stick of Montreal defenceman Brett Kulak, skipped off the ice and handcuffed Price.

“That was the break that we needed,” Muller said. “You’ve got to score some goals to win hockey games.

“But that was unfortunate.”

The Flyers continued the trend of stifling the Canadiens earlier in the period, allowing next to no room through the neutral zone. Montreal did have an opportunity when Joel Armia couldn’t connect on Hart’s doorstep before Kulak pinched down for another chance.

Jeff Petry then blasted a point shot that the Philadelphia netminder just got a piece of before it chimed off the post inside an empty Scotiabank Arena.

Montreal got a power play with 6:42 left in regulation, but Hart, who has made 52 straight saves after allowing four goals on 26 shots in Game 2, stopped Nick Suzuki and flopped onto rebound.

The Canadiens then got an unlucky delay-of-game penalty, and the Flyers coasted from there, improving to 35-0-2 in 2019-20 when leading after two periods.

“We’re not playing perfect hockey,” Philadelphia head coach Alain Vigneault said. “When we do make mistakes, (Hart’s) been able to get that big save.”

The Canadiens, who were 18 points behind the Flyers in the standings when the NHL halted its season in March because of COVID-19, have allowed just five goals in the series, but now find themselves pushed to the brink.

“We’ve seen exceptional goaltending in these playoffs,” Muller said. “The one thing you can’t do is get let a goalie get into your head. It doesn’t always take a perfect shot to score.”

As in Game 3, Philadelphia again pushed ahead early in the first when Raffl worked a nifty give-and-go with Sean Couturier following a Montreal turnover before roofing his second at 6:32 on Price, who looked slightly out of position.

“These are all tight games,” said Raffl, who returned to the lineup Sunday after getting hurt Aug. 2. “To get the lead, it boosts everyone’s confidence. Then we were just committed to finishing it off.”

Couturier had a great chance to put his team up by two on a power play later in the period, but flubbed his shot at a wide-open net. Byron then saw a similar opportunity go over Hart’s goal after Flyers defenceman Ivan Provorov got a stick on his effort.

Montreal nearly got an unlikely equalizer from its fourth line, but Alex Belzile fired high on a 2-on-1.

“I feel like once we get one, it’ll just started rolling,” Tatar said. “Just be a little more hungrier on the net. It’s not over until it’s over.

If they don’t, the Canadiens will be heading home Thursday. 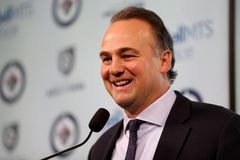