Colin and Amanda Brochu billeted two Humboldt Bronco players: the captain, Logan Schatz, and Layne Matechuk. The two young men had their own suite upstairs, but were not shy around the Brochus and their three kids.

Logan, who had played for the team for several years, moved in with the family last August, and it was the first time the Brochus hosted a young hockey player. He set the tone within the first hour of his arrival.

“The first night he was here, he walked in and he was checking the fridge to see what we had for leftovers,” Colin Brochu said in the family kitchen in Humboldt, Sask.

“It made it really easy not to have the awkward moments. He was comfortable here, which made us comfortable with him here.”

On the second night, Logan fell asleep on the couch in the living room. “He’s never afraid to sleep,” Sean Brochu, who is 13, said. Sean, the oldest of the Brochus’ three children, tried to emulate the Broncos’ captain.

(The family was so close with the young men that they find it awkward to be referred to as Mr. and Ms. in the news. They never were in the household, they said. To the billets, they were always Colin and Amanda. And to Colin and Amanda, the players were Logan and Layne.)

The hockey player’s black Rosche shoes sit on the matt inside the home’s back entrance.

“He is missed,” Colin said.

Logan, 20, was among 15 people killed when the Broncos’ team bus was struck by a semi-trailer on a rural Saskatchewan highway on Friday — a tragedy that has rippled throughout a community where young players live away from their families in homes like the Brochus’.

Layne Matechuk survived the crash but remains in hospital in Saskatoon. He was the quieter of the two hockey players. The Brochus are reluctant to speak about Layne, given that he remains in hospital. But he, too, was important to their family.

“I wouldn’t have traded either of those guys for anyone else,” Sean said in the kitchen. “I’d pick both those guys.”

Many junior hockey teams rely on the same billeting system, in which families volunteer to house young players who have been drafted into the league. The players live and, if they’re young enough, go to school in their adopted communities and often become extensions of their host families.

Logan was from Allan, Sask. He had played hockey for years and developed into an accomplished player. Last month, he was named the Saskatchewan Junior Hockey League player of the month for the second month in a row after hitting 84 points in a season — the highest for the league in six years.

Off the ice, the Brochus said Logan was a stylish guy. He frequently wore bow ties on game day, including a baby blue one. He loved his red Lululemon shorts. He liked to play Fortnite, a video game. He golfed. He cheered for the Pittsburgh Penguins

The family always knew when he was home.

“Oh my gosh,” Colin said. “He walked so loud. So heavy.” His voice, too. It was one of the rare times during an hour-long interview where Amanda’s laughter trumped sniffles and tears. She was sitting in a chair at the kitchen’s breakfast bar.

“He liked roast beef sandwiches,” she said, again telling a story about Logan that made her laugh. “I made him — it was like the second day — I cooked a roast and sliced it up for sandwich meat. And he said: ‘You can just get sandwich meat from the store.’”

Avocados were in, Brussel sprouts and tuna were out. Chicken and rice on game day. Trail mix without raisins, a request Amanda was never able to track down. He loved Yop, the drinkable yogurt concoction.

The Humboldt Broncos’ TV habits also make the Brochu family smile. “The Bachelor is a big deal,” Colin said leaning against the counter opposite the breakfast bar. “It doesn’t make a lot of sense.”

Team members would gather together at a players’ house to watch, betting on which women would win.

Sean says Logan morphed into his big brother. “He would always let me hang out upstairs…He was a lot nicer to me than I am to my own brother.”

The Broncos’ captain was also a leader outside of hockey, the Brochus said. Logan rallied his teammates when the 10-year-old needed help raising money at a skate-a-thon for Type 1 diabetes. The Broncos played hockey with kids with foam pucks during the event.

The Broncos also made a habit out of chores like of shovelling snow.

“Everybody in town just knew that if they needed some extra strong hands, they could call,” Amanda said. “Logan just cared. He wasn’t here just to play hockey. He was a big part of the Bronco family and the community.”

This was Logan last year with the Broncos because of his age. “He wanted to be together with the guys - all the time,” Colin said.

Logan is a distant relative of the Brochu family but they were not close until he moved in. They requested him after his previous billet family moved away.

The Brochu family was in Saskatoon for their six-year-old daughter’s gymnastic competition when they found out about the crash.

Another billet family called Colin and told him about the collision. Information was scarce and the Brochus held tight for the next hour and a half while the competition finished. They tried to reach their billets; text messages were flying. They reached Logan mother, but she didn’t know if he was okay. They knew Layne survived and was in the hospital.

The Brochus then went to Saskatoon’s Royal University Hospital, which was under a Code Orange, meaning mass casualty incident is underway. The hospital set aside a room — the Brochus believe it was a staff cafeteria — for families gathered at the hospital.

It was quiet, Sean said. “And it was scary.” 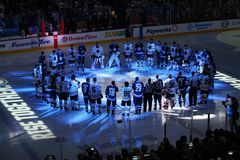 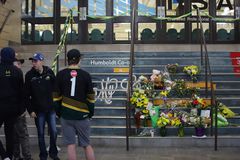 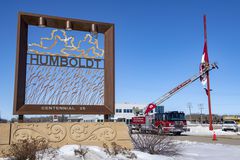