Health Canada has approved the first supervised drug-consumption site in Saskatchewan, as the Prairies struggle with a surge in crystal meth use that has far eclipsed the opioid crisis.

The facility in Saskatoon, which will allow users to inject, snort, inhale or swallow drugs under the supervision of trained staff, is set to start offering services early next year. The site will be operated by AIDS Saskatoon, which already provides an array of harm-reduction services for drug users.

The approval has underscored the lack of supervised-drug use sites in Saskatchewan and Manitoba, which have seen far lower rates of opioid overdose deaths than other provinces, but where increasing meth use has prompted health officials to warn of another crisis.

The premiers in both provinces have opposed supervised consumption services and Saskatchewan has yet to commit funding for the Saskatoon site. The issue has also come up during the election campaign in Manitoba.

Jason Mercredi, the executive director of AIDS Saskatoon, said the site will aim to reduce transmittable diseases while connecting users to the health-care system and treatment. He noted that the site – which will be located west of the city’s downtown– is near other services, including the busiest needle exchange in the province.

“We are the epicentre for HIV, and that’s all been pushed by injection drug use," Mr. Mercredi said. “The need for this is extremely high."

He said the group has the support of the city and its police department, and AIDS Saskatoon will take steps to head off concerns from neighbours, such as having staff conduct regular patrols to clean up needles.

While nearly 4,500 people died across Canada of opioid overdoses last year, only 83 of them were in Saskatchewan and 43 in Manitoba, according to statistics compiled by the federal government.

Health officials have said methamphetamine use has been increasing significantly, although there is limited data on it. Saskatchewan has the highest HIV rate in the country at more than double the Canadian average. Manitoba has the second highest rate.

Premier Scott Moe has previously said he does not support supervised consumption services. For example, when the Regina Leader-Post asked Saskatchewan Party leadership candidates in January whether they support needle exchanges or supervised consumption sites, Mr. Moe said: “No. The province will continue to provide current services for people who are suffering with substance abuse.”

Mr. Moe did not make himself available to comment on the issue. His office issued a statement that noted the province funds a range of harm-reduction programs, including needle exchanges and the distribution of naloxone, which is used to reverse overdoses. The statement said the government would consider a funding request for the AIDS Saskatoon consumption site as part of its budget process

In Manitoba, – which is in the middle of a campaign ahead of the Sept. 10 election – the governing Progressive Conservatives have rejected calls for supervised consumption services for methamphetamine users. Leader Brian Pallister has said he doesn’t believe they work and the party issued a statement that said proposals for supervised consumption services “ignore public safety implications.”

NDP Leader Wab Kinew has promised to move quickly on the issue if elected and said the PC government has ignored the rise in meth use.

“It’s an addictions issue that’s now become a public-health issue and a public-safety issue,” he said in an interview.

“The opposition from Mr. Pallister is completely ideological.”

“Everything it has to offer – the contact with the health-care system, the contact with peers, the hygienic setting, it’s all better than a back alley behind a dumpster,” Mr. MacPherson said in an interview.

“The point is to take a risky, dangerous activity that’s taking place in dire conditions and moving it into a health-care context.”

In Alberta, the recently elected United Conservative government has suspended plans to add new sites and earlier this week launched a review of the province’s seven existing facilities in part to address concerns around crime, discarded needles and public disorder. 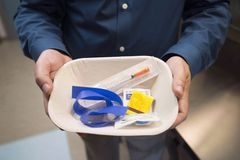 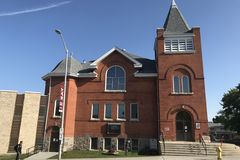