Health officials say they have uncovered problems with protective equipment, staffing and the tracking of resident feeding at a personal care home in Winnipeg that called in paramedics last weekend amid a COVID-19 outbreak.

The Winnipeg Regional Health Authority launched a review of the Maples Personal Care Home after paramedics were called last Friday when many residents were deteriorating rapidly. Two died before paramedics arrived, three were transported to hospital and others were treated on site for hours.

“I will be candid. We have identified a number of issues that concern us,” Gina Trinidad, the authority’s chief health operations officer, said Friday.

The review has found breaches of rules such as improper use of personal protective equipment.

Ms. Trinidad also said there was inadequate documentation of the feeding and hydration of residents. Officials will try to find out whether it was just a paperwork problem or if residents did not get the food and liquids they needed.

At least 106 residents at Maples, a private facility owned by Revera, have tested positive for COVID-19 since the pandemic began and more than 20 have died.

Revera initially said it had 13 of the normal 19 health care aides working the evening shift last Friday. It later admitted there were only seven aides on duty for much of the evening shift in the 200-bed facility.

A request for comment from Revera Friday was not returned

The regional health authority is now checking the home daily. The Manitoba government announced Friday it has hired an independent expert to find out what went wrong. Lynn Stevenson, a former associate deputy minister of health in B.C., is tasked with filing her report in January.

Nursing homes in Winnipeg have been a large part of the recent spike in COVID-19 cases in Manitoba. Officials said Friday 28 of the 35 homes in the region have seen outbreaks and finding enough staff to fill in for those who are sick is a challenge.

“We have limited resources to draw upon, so I am taking this opportunity to appeal to those who are retired health care workers, those who can help out please let us know,” Ms. Trinidad said.

There were other signs Friday that Manitoba’s health system is being severely stressed by the pandemic.

Provincial health officials reported 434 new cases – breaking the 10,000 mark for total cases since the pandemic began – and five additional deaths. Intensive care beds were running close to capacity, even though the government has added beds in recent weeks.

At the Bethesda Regional Health Centre in Steinbach, a COVID-19 hot spot southeast of Winnipeg, nurses said they were having a hard time treating a surge in patients.

“Nurses are reporting having to triage patients in their cars at times because of a lack of space in the Emergency Department,” Darlene Jackson, president of the Manitoba Nurses Union, said in a written statement. “Multiple units are experiencing outbreaks, and approximately seven nurses have already tested positive for COVID.”

Health officials said plans were already being made to shift some general patients with less severe conditions from Bethesda to other hospitals.

Dr. Roussin enacted new restrictions across Manitoba on Thursday to try to stem the rising number of cases. Many non-essential businesses have had to close and restaurants can only offer delivery or takeout. People are being told to not have social gatherings with anyone outside of their household and to wear masks in any indoor public place.

Still, there were signs not everyone was willing to follow Dr. Roussin’s words. A group was planning to hold an anti-mask rally Saturday in Steinbach and was spreading the word through social media.

Manitoba Health Minister Cameron Friesen was asked what he might say to the group. 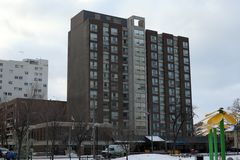