Women forced to pick between cherished symbols of faith and precious careers had a day in court as legal challenges to Quebec’s secularism law began Monday.

Years of debate about the role of religion in Quebec society culminated last year with the province passing a law that mandates religious neutrality in the public service, partly enforced through a dress code banning religious symbols for some civil servants.

Four lawsuits challenging Quebec’s “Act respecting the laicity of the State,” better known as Bill 21, were joined for one hearing in Quebec Superior Court. Citizens backed by a host of advocacy and community groups, unions and school boards are mounting the challenges.

Over the next six-to-seven weeks, religious scholars and legal experts will delve into details of religion and constitutional law. First, the court heard from three women affected by the law.

Ichrak Nourel Hak, the first witness and a plaintiff, testified she was studying education at the University of Montreal when the government introduced the draft law in March, 2019, and passed it that June. She had planned to work in the Quebec public school system when she received her certification in September.

She is a devout Muslim who wears a hijab that covers her hair. Quebec’s public school system is suffering a major shortage of teachers. Because new hires are not allowed to wear a hijab in the public system, she took a job giving private online instruction.

“I felt targeted as a Quebec citizen. I felt excluded,” Ms. Nourel Hak testified. “I know I had the qualities and qualifications to teach and to serve Quebec society. Now I just feel diminished and distressed by the whole thing. I meet all the requirements. All that stands in the way is my religious practice.”

People who wear the symbols and already hold those posts are allowed to keep their jobs. They cannot be promoted or transferred, however, and potential new hires such as Ms. Nourel Hak must remove the religious symbol to work.

Premier François Legault’s government invoked the constitutional override power known as the notwithstanding clause in passing the law, making it exempt from court challenge based on religious freedom rights.

Nearly two dozen lawyers fighting the law are using numerous other arguments to try to get around that major hurdle. Among other arguments, plaintiffs will say the Quebec law is incoherent and violates legal norms that protected basic rights long before the Charter of Rights and Freedoms and the override power.

The Quebec government counters that democratically elected members of the National Assembly, backed by popular opinion, have the right enshrined in the override power to restrict the place of religion in the civic space in the name of religious neutrality.

Amrit Kaur, a Sikh high-school teacher who wears a turban, testified she was very upset on June 16, 2019 – the day she graduated with her teaching degree from the University of Ottawa, the same day Bill 21 became law. Instead of moving home to Montreal to teach, she moved to Surrey, B.C., for her job.

Messaouda Dridj moved to Montreal from Algeria in 2004 with a master’s degree in electrical engineering. She put her career on hold to have a daughter and decided to return to the work force as a teacher, graduating in 2012. She teaches at a Montreal public primary school.

The Muslim woman who wears a hijab testified she never had any trouble from colleagues, parents or students about the way she dresses. Now, she said, she is a second-class teacher at her school. Her current job is exempted from the law, as long as she holds it. This means she can’t move, can’t take a transfer or promotion, or become a high-school math teacher to capitalize on her previous expertise.

Ms. Dridj wept when she testified how a colleague moved to the suburbs where she could afford a house, and took a teaching job nearby – something Ms. Dridj cannot do while wearing her religious scarf. “I spent the night crying the day she told me about her plans,” she said. “Why her and not me?”

Regardless of the outcome of the case, appeals are certain and it may end up before the Supreme Court of Canada – a probability Superior Court Justice Marc-André Blanchard recognized himself as the hearing began.

“This is an extraordinary matter where we will try to follow the ordinary rules” of court, Justice Blanchard said. “But I’m not naive enough to think this matter will end with me.” 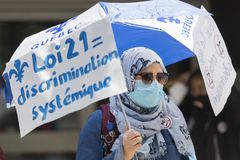 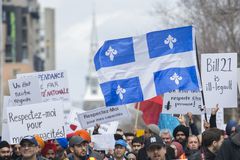