Some of the homeless people who were driven from Toronto’s Trinity Bellwoods Park in a massive police operation last month have ended up living in another nearby encampment, on the overgrown lawn outside Lamport Stadium in the city’s West End.

Around 20 tents and two makeshift wooden structures sit here just steps from one of the city’s emergency “respite” shelters for the homeless, itself a much larger, temporary field-hospital-like tent. On one plywood dwelling, a hand-painted sign reads: “Do Not Remove, Someone Lives Here.” Two other tents are surrounded by tidy collections of potted plants and flowers.

A handful of those who lived at Trinity Bellwoods now call this place home. And the Lamport encampment remains despite being raided in May, a month before police descended in a greater show of force on Trinity Bellwoods and confronted hundreds of protesters demanding that the homeless be allowed to stay.

The Trinity Bellwoods crackdown was not surprising. But there is a better way to respond to encampments

Some homeless people say they prefer camping outside even to the city’s new converted hotel shelters, created during the pandemic. Some fear rising violence there. Others resent the practice of “bed checks” by shelter staff that they say happen at all hours. And some also fear overdosing alone in their rooms, saying that drug users in encampments are better able to look out for each other.

Early in the pandemic, as COVID-19 outbreaks plagued the city’s conventional, congregate shelter system, the city moved hundreds of residents into leased hotels to allow for physical distancing. Encampments also popped up across the city, as some homeless people feared catching COVID-19 in crowded shelters and the city held off clearing parks while the pandemic raged. But now, with vaccination rates rising and no active outbreaks in its shelters, the city has issued trespass notices at several parks with large encampments.

One resident at Lamport says he is an artist and calls himself “j, the letter.” He declines to give his legal name. He tells a reporter he lived at Trinity Bellwoods for a year but was arrested and forced to leave after last month’s daylong standoff. While a dozen of the approximately 25 homeless people living in Trinity Bellwoods did agree to accept a room at one of the city’s converted shelter-hotels that day, j says he will never do so.

“Too many of us are dying in these hotels,” j said, saying the danger of overdosing on drugs alone looms much larger than catching COVID-19. “ … I am not going to a hotel room.”

Some advocates for the homeless say until more people like j can be persuaded to willingly come inside, no amount of policing can stop new encampments from popping up even before tents can be torn down.

The Toronto Drop-In Network, an umbrella group of agencies that work with the homeless, along with a host of other groups, released a detailed letter this month asking the city to abandon what it calls “military tactics” and instead work harder to address the shortcomings of its shelter system. The proposal, titled “A Path Forward,” has also been endorsed by more than 1,400 supporters, including singer Serena Ryder, former mayor John Sewell and former MP, city councillor and mayoral candidate Olivia Chow.

While acknowledging that “parks cannot be a permanent housing solution,” the open letter urges the city to ensure residents are given time to choose a shelter space that works for them, without coercion. It also calls for more consultation with homeless people and a review of shelter conditions and procedures, including “bed checks.”

But at city council’s last scheduled meeting until September, Mayor John Tory and his majority of supporters on council showed no sign of changing tack, with the mayor accusing some activists of only wanting to delay clearing the parks. City Councillor Josh Matlow, who was among those who moved similar unsuccessful motions calling for a new approach in June, said only a motion with Mr. Tory’s backing had any chance of success.

Mr. Tory has defended the clearing of the encampments, which he says are illegal and a fire risk. He said city outreach workers have already spent months trying to persuade some homeless people to come inside. The city says more than 1,700 people have been moved from the streets to shelters or shelter hotels since the pandemic began, with about 400 referred to permanent housing.

The mayor said parks need to be available for use by all residents, noting that day camps for children in Alexandra Park, a low-income neighbourhood, have been cancelled because of the presence of the encampment in that park.

“Of course we’re going to take a look at the letter. But many of the things we’re doing now are things that are mentioned in that letter,” Mr. Tory told reporters this week. “We’re already doing them. We just don’t get any credit for doing it because it doesn’t suit the nature of some of the argument that is made by some, not by all.”

Some homeless people at Lamport Stadium and Moss Park, another large downtown encampment, east of Yonge, insist they will refuse to leave unless they are offered permanent housing, not just a shelter hotel. Others say they will just pitch a tent somewhere else – even though some also fear for their safety in encampments.

Gru, a homeless man and activist whose legal name is Jesse Allan, camped at Trinity Bellwoods until accepting a spot at a downtown shelter hotel in March. He said people with homes may not understand how threatening it is for someone who has lived on the street to have a stranger enter a room for a bed check.

“When you are in the encampment and someone is coming into your personal space it is to beat you up, rape you or steal your [stuff],” Gru said.

One woman who lives in one of the shelter hotels said she felt violated by bed checks that involved staff coming into her room in the middle of the night on multiple occasions.

“It woke my husband up. I was lying in bed next to him naked. And there were two guys in our room, going through our drawers,” she said, declining to provide her name for fear of losing her shelter spot.

Gord Tanner, the city’s director of homelessness initiatives and prevention, said in an interview that the city has heard complaints about the practice and has recently sent out new guidelines to the non-profit agencies that operate most of its shelters.

He said these “wellness checks” are necessary in hotel shelters to try to stop overdose deaths, as well as screen residents for any COVID-19 symptoms. City figures show more than 46 people died of overdoses in the city’s shelter system in 2020, with 14 so far in 2021. That compares with at least 10 COVID-19 deaths among shelter users since the pandemic began.

The new guidelines say one check should be done for each resident each day but that staff should not perform them when residents are likely to be sleeping. It also says staff should be “nonpunitive and non-judgmental” about any evidence of drug use, but should still scan rooms for “signs of hoarding, drugs and paraphernalia, alcohol, weapons or prohibited items.”

Noting the overdoses, but also a number of fires in the shelter hotels, Mr. Tanner said staff need to have access to the rooms at all times. But he said policy is always to knock first: “I don’t think at any time staff are simply just barging into people’s rooms.”

Back outside Lamport Stadium, Mary Jane Budd, 43, and Sam Chalmers, 53, are lingering by a park bench. They say they lived in the encampment until their tent burned down in the winter – but after that, accepted a spot in one of the city’s downtown shelter hotels. They say they like their new home much better than an encampment – but they too complain about what they say are constant “wellness checks.”

“They keep calling us every hour,” Mr. Chalmers said. “So if you want to go to bed early, you can’t. … It doesn’t really help. If you are going to overdose, they are going to be really lucky to catch you on the hour. … The checks are just aggravating.”

Cities across Canada grapple with how to respond to growing homeless encampments
June 24, 2021 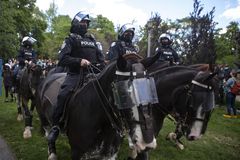 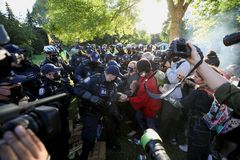 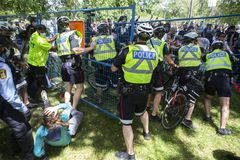