Beth Ann Cryderman lets nothing stop her. On a street plagued by armed gangs and drug dealers, she dares to run a community garden – and has made it successful enough to produce bags full of vegetables for her neighbours this year.

The 59-year-old former hairdresser has worked tirelessly on campaigns to persuade local authorities to evict gang members and close the crack houses on her street. But what really upsets her is the possibility that Thunder Bay City Council could kill a rare initiative to help the homeless in her neighbourhood.

“I can’t believe it,” she said tearfully at a recent community meeting, recalling the hostility she has endured from the housing project’s opponents.

Later, sitting in front of her small bungalow, she points to a nearby park where a teenaged boy committed suicide and a neighbouring house where a stabbing occurred.

“People don’t understand the trauma that we have,” she told The Globe and Mail. “That housing would provide help – and we’re going to turn it away?”

The project, just three blocks from her home, would include transitional housing units for as many as 58 young homeless people, from 18 to 29, along with counselling and life-skills training to help them get off the streets. Most of its residents will be Indigenous people.

All those issues are intertwined in the housing battles that have erupted this summer in Thunder Bay and another Northwestern Ontario town, Kenora, where officials ordered the temporary shutdown of a largely Indigenous homeless shelter that has been opposed by many residents and business owners.

A recent federal survey in 61 cities and towns across Canada found that almost a third of the homeless are Indigenous. The survey estimated more than 470 people were homeless in Thunder Bay last year – a relatively large number in a city of 110,000 people – and about two-thirds were Indigenous. One-third said addiction or substance abuse was a contributing factor to their homelessness.

While the city has emergency shelters for the homeless, there is a severe shortage of affordable housing, with long waiting lists for subsidized housing. The new transitional project in Ms. Cryderman’s neighbourhood is aimed at filling the gap between shelters and permanent housing.

Earlier this year, Thunder Bay City Council agreed to sell an empty parcel of city land to one of the project’s partners, Ontario Aboriginal Housing Services, at a reduced price. But construction cannot begin until a crucial vote on its zoning.

The site, adjacent to the local headquarters of Emergency Medical Services, is largely surrounded by suburban streets of bungalows, apartment blocks and social housing.

In July, at a public meeting of about 250 people to discuss the project, one resident near the planned site complained that he didn’t feel safe because his home had twice been broken into “by natives.” Jeers erupted, and another man interrupted him, telling him the house had been broken into "by people.”

The zoning issue is expected to face a vote at City Council in September. But after two community meetings where emotions ran high, nobody is quite sure how the vote will go. “It will be tough,” City Councillor Brian Hamilton told The Globe. The project’s supporters shouldn’t assume the vote will be a “slam dunk” in their favour, he said. “I think we need to do a little more exploration of it.” One of his council colleagues told him his calls are running 95 per cent against the project, he said.

Thunder Bay’s daily newspaper, the Chronicle-Journal, recently published a column giving a “thumbs down” to the housing project, portraying it as a threat to the safety of children in local schools and sports fields.

At a community meeting in June near the proposed site, most people spoke vehemently against it. The project could heighten the risk of crime and damage the property value of nearby homes, the opponents argued.

Ms. Cryderman said she felt she would be “tarred and feathered” when she spoke in favour of the project at the June meeting, where about 200 people were largely opposed to it.

“It blows my mind that people think it would be dangerous,” she said. “These are white privileged people who are opposing it. They’re trying to stir people up and scare people. They’re making it out that we’re going to cause crime, but we’ve gotten rid of six crack houses here.”

Her own story is one of resilience and resistance to crime. For the past five years, the adjacent unit in her semi-detached house was occupied by gang members from Southern Ontario who sold drugs in the neighbourhood. She was once woken up by a buyer who had stumbled through the wrong door. “I want a 40 of crack,” the buyer told her in her bedroom.

After taking photos to document the drug use at the house, Ms. Cryderman and her neighbours were finally able to persuade the city housing authority to evict the tenants.

At the June meeting, she was upset when the project’s opponents said it would be located near “those people.” She felt it was a dismissive insult about the social problems in her neighbourhood.

“We are a community and we do a lot of good things,” she told The Globe, describing a food bank she helped to run. “There’s crime all over our city, it’s not just in this area. You can get meth in any district of this city.”

City councillors who oppose the housing project have complained that it is too close to two schools and the Boys & Girls Club of Thunder Bay, all of which would be within two blocks of the new housing.

One councillor, Albert Aiello, told local website TBNewsWatch the housing should not be near the schools and the youth recreation centre because the project’s expected residents “share a lot of the characteristics that would deem them at risk.” To have it in “close proximity” to the schools and the centre is “just not good judgment,” Mr. Aiello told the website.

Mr. Aiello, who is also the executive director of the local Boys & Girls Club, did not reply to messages from The Globe.

The proponents of the project – a coalition of Indigenous groups – say the transitional housing could reduce crime if it follows the pattern of similar housing projects across North America. In the Northern Ontario town of Sioux Lookout, for example, police data showed the residents of a transitional housing project had dramatically fewer interactions with the police after they moved into the building, they said.

The Thunder Bay project would have 24-hour staffing and curfews to ensure security, and its residents would be required to abstain from alcohol or drugs, they said.

“Let’s not pretend that Thunder Bay is not in crisis,” said Cora McGuire-Cyrette, executive director of the Ontario Native Women’s Association, one of the proponents of the project.

Hot-dog harmony: How a Thunder Bay diner and its Coney sauce comfort a divided city
August 16, 2019 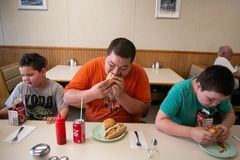 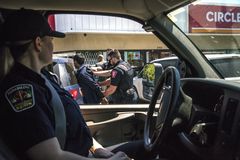