Alongside a dirt road in Muscowpetung Saulteaux Nation, community members drive up with lawn chairs in tow to sit outside a fenced-in enclosure and watch a herd of 15 bison gnaw on the prairie grass.

“Oh my God, they love it. They’re visiting them every evening,” James Pratt said about the excitement over the bison’s return to the Saulteaux community, nestled among the rolling Qu’Appelle valleys in Treaty 4 territory northeast of Regina.

Mr. Pratt is a community helper in Muscowpetung and part of a team that worked to bring back the stately creatures that once roamed the Saskatchewan prairies. The herd was initially bought to bolster food security during the pandemic, but the animals are providing the community with more than a stockpile of meat. They’re reconnecting community members with their past and revitalizing their culture. “At one point, these animals were just about wiped out and now … in the last probably 20-30 years, they’re starting to make a comeback, they’re starting to come into our territory,” Mr. Pratt said.

It’s estimated that more than 30 million wood bison and plains bison roamed the Great Plains of North America before the late 1800s, when their population was drastically reduced as lands were colonized and developed with treaties between Canada and First Nations.

The Muscowpetung Bison Farm is now planning a four-year project to grow and manage a herd permanently to move beyond a pandemic stopgap measure.

“We didn’t realize the strength [the herd] would bring to our community,” Saulteaux Nation Chief Melissa Tavita said, adding the return of the bison was also the vision of a late elder. “We’re going back to our roots and going back to our traditional ways.”

In preparation for the bisons’ arrival in July, Muscowpetung consulted with elders and knowledge keepers to ensure they followed traditional Saulteaux teachings and customs.

The herd was welcomed with a feast and pipe ceremony when they arrived from Alberta, and were released into an enclosure, where they will roam and graze until they are harvested for food in the event of a community lockdown that restricts access in and out of Muscowpetung.

“But for each time we slaughter a buffalo, there has to be some sort of ceremony done to that as well,” Chief Tavita said.

Ron Steckly is the rancher from Carstairs, Alta., who sold the herd of his wood-plains-cross bison to Muscowpetung, the fourth First Nation to receive his bison.

Mr. Steckly grew up on a dairy farm in Alberta but took up cattle instead. He bought his first bison in the late 1990s, but says he wasn’t making any money off them and had in fact sold most of his bulls and heifers to offset costs of keeping them. So when he was approached by a Samoan Christian group in Saskatchewan about donating a herd to Peepeekisis First Nation, not far from Muscowpetung, who wanted to revitalize the population for its cultural significance, he gave them 20 cows and two bulls at no cost.

Last winter, Peepeekisis had enough in their herd to move some cows and bulls to another First Nation that has also welcomed the bison back onto their territory.

Mr. Steckly will work out a similar agreement with Muscowpetung to deliver another herd this winter at no cost.

The rancher said the bison program has led to new friendships and teachings. He initially had no idea how much bison meant to First Nations people’s identities.

“It is really something to experience when you drive into and you arrive at the destination where they’re going to be unloaded and there are people and more people and cars, and they’re all waiting and they all want to see the buffalo and they are excited about it and they’re emotional about it,” Mr. Steckly said from his ranch, where he has around 400 bison.

Mr. Pratt says bringing the bison back onto their territory is a teaching – from the elders for the young people and future generations – that, like the bison, First Nations are survivors of colonialism.

“As First Nations, I guess they tried to do away with us too in history,” he said about Canada’s relationship with Indigenous people.

Kevin Wesaquate calls the reintroduction of bison a movement to preserve a cultural identity that carries sacred teachings and stories that are hard to find.

Mr. Wesaquate, whose art and poetry often includes bison, is a Cree artist and poet from Piapot First Nation, next to Muscowpetung. He says Indigenous identity is connected to the ability to practise old customs, traditions and ceremonies that are coming back to First Nations.

Chief Tavita said the recent months have been stressful on the community, not just with COVID-19 but other events, such as a band election, which can divide members.

Seeing the bison helped the community feel that “we’re moving forward in a good way,” she said. “They really appreciated that there’s something to look forward to.”

Saskatchewan has reported about 1,600 COVID-19 cases, while Indigenous Services Canada says they’re aware of 92 cases on reserves in the province.

Chefs on the Prairies put Indigenous cuisine in the spotlight
June 27, 2020 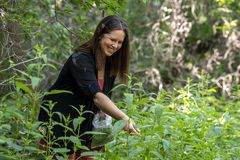 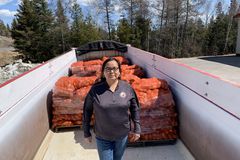