His black collar can be tough to spot. When his summer body is at its prime, he can attract a companion just by being in the right place, at the right time. He’s scrappy and might take off to the United States in a hurry.

Blue is a Great Lakes piping plover, an endangered shorebird. Local hopes for its resurgence have been pinned on Blue, his mate, Ms. Howard, and six other nesting pairs in Ontario.

He’s also a climate crisis adaptation success story. Treacherous migration for these small birds had been made worse by the climate crisis. Around the Great Lakes, warming water temperatures and flash flooding of plover nesting areas are among the climate change threats to navigate. And yet, Blue has endured.

Blue was born on Hanlan’s Point Beach on the Toronto Islands in 2018, one of the first surviving piping plovers from Toronto in over 84 years.

He is now three-years-old, mid-life for the average piping plover. The size of a softball, sand coloured with a white belly, he has a single black band of feathers around his neck, with tiny coloured bands around his legs.

Blue can be hard to notice, camouflaged on the beach, but the trained eyes of conservationists and avid birders delight in catching a glimpse.

For the past two springs, Blue has returned to Darlington Provincial Park, east of Toronto along the shoreline of Lake Ontario. The sandy, pebbled beach is perfect plover habitat with scattered driftwood and grassy vegetation.

The bands are colour coded, offering a personal identification. In science, naming animals is discouraged, but the small group is easy to get to know and a name helps public engagement.

Blue’s name has two explanations. When he was a young bachelor in 2019, navigating the world alone, he seemed sad and blue. There’s also a more obvious reason: the blue dot on his orange leg band.

Blue’s mate, Ms. Howard, was named after she was spotted wintering at Fred Howard Park, northwest of Tampa along the Gulf of Mexico.

Piping Plovers are seasonal migrants, leaving before the shoreline freezes, typically heading to the same spot on the Gulf Coast. When Blue flies south for the winter, he leaves admirers on tenterhooks wondering if they’ll see him again.

Plovers battle unpredictable and intensifying hurricanes on migration flights. Very little is known about their migration, but recorded sightings help to keep track. Blue has been spotted at Papel Lookout in North Carolina and further west, at Headlands Beach in Ohio. He’s proven a real international bird of mystery.

“They often stop at some of the same places during migration,” says Francesca (Francie) Cuthbert, a professor in the Department of Fisheries, Wildlife and Conservation Biology at University of Minnesota.

Great Lakes piping plovers were designated as endangered in the mid-1980s when around a dozen pairs remained, leaving them near extinction.

Around the same time, Ms. Cuthbert was just beginning her effort to boost the population. She works out of a centrally located facility between Lakes Michigan and Huron, tucked into a dense forest.

She says people benefit from the continued presence and protection of plovers in the Great Lakes, which in turn creates beaches and natural spaces to enjoy.

“They are the most highly regulated of the species and the coastal system, protecting things that are important to people, like access to recreation, prevention of erosion, and water quality issues,” Ms. Cuthbert says.

After more than three decades, she has intimate knowledge of the birds. She’s also got a sense of humour about their nesting behaviours. “This is a story about adultery and incest,” she said in an e-mail about Blue.

Ms. Cuthbert laughed while explaining by phone. In addition to Ms. Howard, Blue nested with two single plovers this spring, one of them twice. Ms. Howard previously nested with her brother, but it happened before Blue was around, because he’s three years her junior.

Cases of adultery and incest aren’t uncommon amongst these plovers, who aren’t monogamous, but returning to the same location each spring can lead to a consistent mate.

While every bird is critical, they’re coupled off in the official count. This summer, there are 74 nesting pairs in the Great Lakes, the highest since 76 pairs in 2017 and an increase from 64 pairs last year.

It’s still early, but 2021 has the potential to be very successful for plover growth, thanks to a hot, dry spring season. Water levels were down in all the Great Lakes. In June, the average water level in Lake Ontario was the lowest it’s been in the month of June since 1958.

“This has created some really excellent plover habitat. It’s not only brought back the old habitat, but because it was underwater, it’s refreshed and new. We’re seeing a lot of births this year,” Ms. Cuthbert says.

Plover chicks look like cotton balls with legs, the weight of a spoonful of cocoa powder. The first days and weeks of their lives are crucial and the goal is to get 1.5 chicks a pair to fledge.

Blue and Ms. Howard produced four chicks for a second straight year. Their 2020 nest was considered a “massive success,” all four chicks fledged then too, and at least one is still alive, in Michigan.

If unpredictability of weather and predators aren’t enough of a challenge, the shorelines can change dramatically from year to year. Human development, flooding and high water levels can leave beaches unrecognizable.

For the plovers who do migrate safely, rising water temperatures pose another threat. Warm water can lead to occurrences of botulism, a lethal poisoning of the food chain for plovers.

The U.S. has a recovery goal of 150 pairs in the next five years, 100 pairs in Michigan alone, in order to consider delisting as endangered. The goal doesn’t include Ontario’s plovers.

“We like to fantasize that the population is going to continue to shoot upwards, but any population has ups and downs affected by lots of things. So, what you want is an upward trajectory over time,” Ms. Cuthbert says.

In over 30 years, the population has seen a resurgence of over 500 per cent. While the birds can adapt to the unpredictability of the climate crisis, preserving Great Lakes beaches is essential.

“Much of their habitat is coastal dune and it will stir your soul. They’re just so spectacular, that’s why people go there,” Ms. Cuthbert says.

While Blue has managed to adapt to the effects of the climate crisis, his life is still precarious. In the Great Lakes, plovers nest on the same beautiful beaches people like to enjoy, leaving them vulnerable.

The pandemic has enticed more people outside, exploring nature locally, which also attracts more plover predators to the beach. To keep people at a distance, Birds Canada and local teams set up fencing around nests, about 50 metres in every direction.

While plovers are very sensitive to human disturbance, growing awareness is necessary.

“Sometimes that’s all it takes for it to click. They realize just how small and vulnerable the chicks are right from the start. And they’re cute, too, which obviously helps.”

A racetrack, a songbird and the battle over the future of the Rosebud River Valley
Subscriber content
July 11, 2021 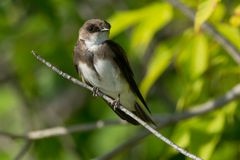