The federal government allowed some employers of migrant farm workers to submit three-year-old housing inspection reports in order to secure labour during the pandemic, instead of requiring up-to-date evidence of compliance with the temporary foreign worker program.

As well, for a six-week period at the outset of COVID-19, the government stopped conducting housing inspections under the TFW program altogether. When the audits resumed, they were done remotely.

While Employment and Social Development Canada (ESDC) has received 32 COVID-19-related complaints regarding the program in the agri-food sector since March, not a single farm has so far been found in violation of several key pandemic-related rules. For example, employer-provided accommodations must allow workers to keep a distance of two metres, and employees must be paid for their mandatory quarantine upon arrival in Canada.

The federal government is ultimately in charge of the TFW program. It has the power to conduct pro-active inspections of accommodations, which can include bunkhouses, trailers and sheds. The provinces and local public-health units also have a role to play in oversight, creating a jurisdictional quagmire that has proved detrimental to the well-being of some temporary foreign workers.

In Ontario alone, more than 1,000 migrant farm workers have tested positive for COVID-19, according to a Globe and Mail survey of local public-health units. Health officials have stressed that, for the most part, the workers arrived in Canada healthy and contracted the virus locally. Three men from Mexico have died.

A Globe investigation into the outbreaks published last month exposed the unsafe conditions endured by some migrant workers. Interviews, photos and videos portrayed overcrowded accommodations, broken toilets and cockroach and bed-bug infestations. As well, sheets and cardboard were used as dividers between bunk beds. Workers also recounted not being fully paid for their initial quarantine.

Federal guidance for employers of temporary foreign workers, updated in April, said that if an agri-food operation can’t submit a valid housing inspection report owing to COVID-19, “they must try to provide a satisfactory” report within the previous three years. The employer must later provide proof of compliance before the end of the permit term.

And even if an employer can’t produce a report from the previous three years, the company can still be approved to receive temporary foreign workers “if photos of the accommodation are provided and the employer agrees to submit an updated [report] to ESDC within the duration of the work permit.”

The department said in an e-mail that it would be rare for an employer to submit a three-year-old housing inspection report. In prepandemic times, employers had to provide, on an annual basis, a satisfactory report no older than eight months if they wanted to hire temporary foreign workers. This means that if a business employed migrant workers last year, for example, it would have had a recent report that it could submit.

In an interview with The Globe last month, Employment Minister Carla Qualtrough acknowledged shortcomings in the TFW program and said Ottawa will overhaul it. Ms. Qualtrough said “nothing is off the table,” including changes to the enforcement regime. She also said that the government may create national housing standards that would have to be met for employers to qualify for the program.

Santiago Escobar, a co-ordinator with the Agriculture Workers Alliance, said the group has long sought improvements to what he described as “so-called inspections.” The alliance operates under the United Food and Commercial Workers union and represents migrant employees. “[The oversight regime] is not doing enough,” he said. “All inspections must be done in person, before workers arrive, and again once they’ve moved in.”

Over the past few months, Mr. Escobar said, the alliance has helped process dozens of applications for federal open work permits. This type of authorization, launched last year for vulnerable migrant workers, allows foreign nationals to leave abusive employers and work elsewhere for up to one year. Mr. Escobar said many of the applications included pandemic-related concerns. All of the submissions were approved.

And yet no employers have faced penalties for breaches of federal COVID-19-related rules. The employment department noted, however, that approximately 11 per cent of employers have required “some correction to minor issues” before being deemed compliant.

Of the 32 COVID-19-related complaints regarding the TFW program, the department has launched 11 inspections. Three are complete, with the employer found compliant in all areas. The rest of the complaints are under review. The federal government has the authority to penalize employers found to be non-compliant, including through a fine of up to $1-million and a ban on accessing labour through the program.

From mid-March to the end of April, Ottawa halted its housing inspections; ESDC said this was done to protect the health and safety of migrant workers, employers and government staff. When the inspections resumed, they were done remotely.

York University professor Leah Vosko, a Canada research chair whose work focuses on enforcement of employment standards and the precarious immigration status of migrant workers, said remote inspections are problematic. They don’t always accurately establish whether employers are abiding by the rules, she said, and information can be easily fabricated and manipulated.

In addition to more in-person audits, Prof. Vosko said Ottawa should increase unannounced inspections. “[A worker] being seen as a ‘troublemaker’ can jeopardize current and future employment contracts and lead to repatriation,” she said in an e-mail. “Proactive inspections are therefore needed to address the well-documented exploitative and unsafe conditions migrant farm workers labour under.”

One migrant farm worker told The Globe that when employers are given advance notice of an inspection, they have time to make conditions appear better than they are. “They’re prepared for the inspection, and usually what they do is show the good lunch room or the part of the facilities that are in good shape,” the worker said. The Globe is not identifying the worker because of concerns about future employment.

Prof. Vosko said Ottawa must create a national housing standard for temporary foreign workers. She pointed to a 2018 federally commissioned study on employer-provided accommodations that found a lack of uniformity in housing conditions and oversight.

“Consequently, prior to the pandemic, there were no concrete federal directives around housing capacities, bed size, number of windows and doors, privacy measures, food preparation and storage, [and] sanitation facilities,” she said.

At the provincial level, Ontario Premier Doug Ford has repeatedly cited Ministry of Labour inspections and compliance orders as evidence that his government is taking action to protect migrant farm workers. But ministry inspections cover workplaces, not housing. The ministry said in an e-mail that it conducted 142 field visits in the agri-food sector related to COVID-19 between mid-March and early June. The inspections resulted in 34 COVID-19-related orders to improve conditions.

Scotlynn Group’s farm in Vittoria has been the subject of two formal COVID-19-related complaints to the Ministry of Labour. In May, there was a complaint with regard to “lack of COVID-19 measures,” and in June, there was a second one regarding “quarantine requirements,” according to ministry records provided to The Globe.

Investigations into the complaints are continuing; neither has so far resulted in a compliance order. The ministry is also investigating the June 21 death of Juan Lopez Chaparro, a 55-year-old Scotlynn worker from Mexico who had been admitted to hospital with COVID-19. The ministry declined to comment on the continuing fatality investigation.

Mr. Lopez Chaparro was one of 216 migrant workers at the Scotlynn farm; almost all of them have tested positive for the virus. Without a work force to speak of, the farm abandoned its asparagus harvest in early June.

The president and chief executive of Scotlynn Group – a North American transportation logistics and farming company with one of the largest vegetable operations in Ontario – told The Globe last week that all of the Vittoria workers have since tested negative and have been cleared to return to work. Scott Biddle said the Ministry of Labour told him they would likely be on site for two days to investigate Mr. Lopez Chaparro’s death, but ended up staying for two hours.

Mr. Biddle said officials interviewed him about the farm’s health and safety measures, including as it relates to accommodations for the initial mandatory quarantine. He said he rented hotel rooms for nearly 200 workers; 21 employees were isolated across seven bunkhouses, in line with a public-health occupancy directive that limited the number of workers per bunkhouse to three.

After four pro-active Ministry of Labour inspections and follow-up visits between January of 2010 and June of 2020, Scotlynn’s farming operation has been issued 13 compliance orders, according to ministry records. The orders require, among other measures, that the company prepare a policy for harassment and “assess the risks of workplace violence that may arise from the nature of the workplace, the type of work or the conditions of work.”

In five instances, the compliance order says vaguely, “the employer shall take every precaution reasonable in the circumstances for the protection of a worker.”

Three Scotlynn workers were among those interviewed for The Globe’s recent investigation. The men described overrun living conditions; ill workers living with healthy ones; and no PPE to guard against the virus.

Mr. Biddle said the two formal COVID-19-related complaints submitted to the Ministry of Labour are baseless and were brought by one “rogue” employee. “Every company has had complaints, but we’ve never had a fine,” he said. “We take every precautionary measure possible. We always go above and beyond.” 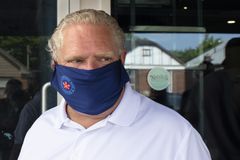