Tim Ennis is gliding in his kayak up the mouth of the Courtenay River. The view around him isn’t exactly a pretty sight. One bank of the river, which spills into a lovely estuary, is walled with rusty corrugated steel. The ground above the wall is a barren expanse of broken concrete and asphalt. “It’s a beautiful piece of property we bought, isn’t it?” he says.

But Mr. Ennis has a smile on his face. The conservation group he works with, Project Watershed, raised millions to acquire the site, home of an abandoned sawmill that was considered one of the worst eyesores in the Comox Valley area on Vancouver Island. The group plans to return it to its pre-industrial splendour, removing the ugly 400-metre-long retaining wall and creating a wetland where salmon, herons and otters can thrive. After years of lobbying, fundraising and negotiating with the local First Nation, work on the Kus-kus-sum project is finally under way. Crews have already pulled down an old sawmill building. Now they are jackhammering the concrete and dumping it in bins for recycling. For Mr. Ennis and locals who have watched and waited for progress, it is a marvellous sight.

To make it all the more satisfying, the headway is happening without the acrimony that has broken out in places such as Fairy Creek on the other side of Vancouver Island, where protesters have been confronting police in a struggle over the logging of old-growth forest. Mr. Ennis and his colleagues worked closely with Interfor, the forestry giant that owned the property. Rather than confront resource companies, groups like his are quietly buying up and restoring environmentally sensitive pieces of land.

“I’ve never stood in front of a logging truck, but I’ve worked with just about every logging company,” says Mr. Ennis, 46, a biologist and outdoorsman who is senior project manager for Kus-kus-sum.

Environmentalists have dreamed of restoring the site ever since the clanking old mill closed in 2006. The estuary, where fresh water meets salt, is one of the most fertile on the B.C. coast. Remnants are still visible of a complex network of fish traps Indigenous people built there to exploit its abundance long before colonialism.

The mill and its steel wall changed the river’s flow, deflecting it and eroding the opposite bank. Seals learned to use the wall to catch salmon. Adult seals would herd the fish against it and train their young to lie in wait. It became known as the “killing wall.”

When the mill closed, conservation groups worried that developers would snap up the site to build homes for the retirees that are flocking to the Comox Valley, driving up real estate prices. Project Watershed set a goal of raising $6.5-million to buy the 8.3-acre property and “unpave paradise.”

The plan captured the imagination of the community. Residents often pass by the site on their way through town, and welcomed the chance to help beautify it. Donations big and small flowed in.

The B.C. government also came through. Mr. Ennis was out getting ice cream one day when he got a call from the province’s chief financial officer. An e-mail with a document was on its way to him. Could he sign it and send it back by the end of the business day? “Yes, sir, I could,” he replied. He ran home from the ice cream shop. “Holy gosh, it’s a million dollars,” he remembers thinking. Another $650,000 was to come. Premier John Horgan took a personal interest and visited the site during last fall’s provincial election campaign.

Interfor signed over the property soon afterward – the last sawmill building came down in March and work on breaking up the concrete started June 21. Once the site is cleared, workers will start on earthwork and planting. The aim is to create a rich habitat that will connect with an existing marsh just downriver.

It’s a win not just for the estuary, but for the environment at large at a time of raging wildfires and rising alarm over climate change. With their dense plant matter, salt marshes take in more carbon per square metre than towering stands of old-growth forest. 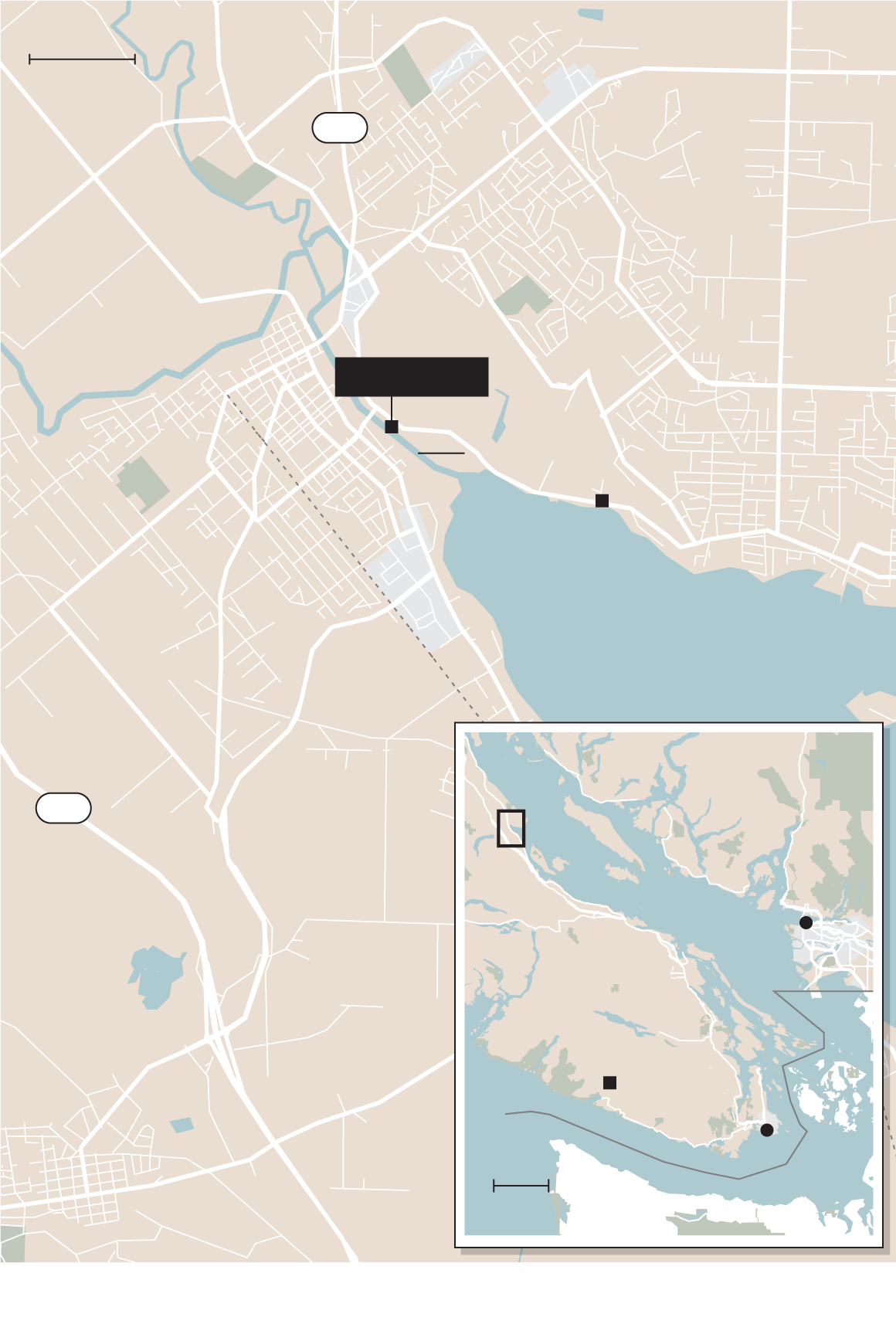 It’s a win for reconciliation, too. Project Watershed worked closely with the K’ómoks First Nation, which will hold joint title to the site with the City of Courtenay. The site takes its name from an Indigenous village that once stood on the riverbank. Kus-kus-sum means slippery, likely a reference to algae-covered rocks by the river. Its heritage was honoured by a traditional ceremony to mark the start of demolition work. Eagle down was sprinkled to purify the area, once used as a cemetery.

It’s all in sharp contrast to what is happening just a three-hour drive away in Fairy Creek. Comox Valley environmentalist Meaghan Cursons says that while she would never criticize the protesters for striving to defend forests, “we are in a different context here.”

Much of the timberland in the area is privately owned, just as the Kus-kus-sum site was. That is unusual in British Columbia, where much of the land used for forestry is held by the Crown.

It means that instead of fighting the government over what parts of timberland should be conserved, local groups can negotiate with the companies to purchase sensitive tracts and protect them.

The group Ms. Cursons leads, the Cumberland Community Forest Society, has been buying up sections of local forest since 2000, quietly creating a natural haven next to the historic community of Cumberland, a growing mecca for hikers and mountain bikers just southwest of Courtenay. The group’s current projects include collecting data on the 10 local bat species, helping to protect thousands of tiny western toads that migrate from local lakes and wetlands into the forest, and raising money for a new purchase of land.

She says the work that she and others, like Mr. Ennis, have been doing is a combination of art and sport. “The art is raising all this money. The sport is racing against time to buy private land before it tips into the hands of people who are property-speculating.”

The result at Kus-kus-sum should be spectacular. Workers will build trails and viewing platforms to help the public enjoy the site. They will plant thousands of native trees, shrubs and wetland plants. They will create channels and ponds leading to the marsh. They will pull up the giant sheets of steel that form the killing wall and put a sloping riverbank in its place.

The migrating salmon will gain a fighting chance. Instead of being corralled by marauding seals, most will slip away through the swaying marine plants to live another day.

View more suggestions in Following Read more about following topics and authors
Follow Marcus Gee on Twitter @marcusbgee
Report an error Editorial code of conduct
Due to technical reasons, we have temporarily removed commenting from our articles. We hope to have this fixed soon. Thank you for your patience. If you are looking to give feedback on our new site, please send it along to feedback@globeandmail.com. If you want to write a letter to the editor, please forward to letters@globeandmail.com.
Comments