In the early days of the unprecedented mass quarantine of nearly 4,000 people on the Diamond Princess cruise ship, Lolita Wiesner recalls strict adherence to the guidelines for preventing the coronavirus from spreading: Passengers wore masks at all times and kept their distance from each other.

But as the days wore on, the resident of Red Deer, Alta., noted a shift. Suddenly, groups of people were congregating around the ship, chatting and hugging. Smokers appeared on deck with lowered masks.

As the number of cases on the ship steadily increased, fellow passenger Trudy Clement, who lives near North Bay, began to question why hundreds of crew members – wearing gowns and masks – continued to move freely on the ship, delivering meals and working side-by-side as passengers were told to stay in their rooms.

As the coronavirus spreads, China is losing its control online

“Really, in many ways, I don’t think this was a true quarantine, having some of us follow the rules but not all of us,” Ms. Clement wrote in a series of instant messages while waiting for a charter plane to return her and her husband to Canada this week.

The accounts provide new insight into why the quarantine, designed to prevent transmission of a new and serious virus, turned into a glaring example of a public-health experiment gone wrong. Among those on the ship, at least two have died and hundreds more have been infected with COVID-19, the name of the disease caused by the coronavirus. By the time the quarantine was officially lifted this week, at least 634 of the 3,711 people on board had caught it, making it the largest cluster of cases outside of the virus’s epicentre in China.

The 47 Canadian passengers who were infected with the coronavirus on the ship must remain in Japan for treatment. The federal government said it will provide consular support, but has declined to provide details about the types of accommodations that will be made.

As the Japanese government faces mounting questions about why it allowed the quarantine to continue when it was clearly backfiring, there is fear the failed containment effort will have global consequences. Hundreds of passengers left the ship this week after they tested negative for the virus. The number of cases on the ship increased dramatically in the last days of the quarantine and the virus has an incubation period of up to 14 days, meaning some who disembarked could end up testing positive.

“This was not a successful operation,” said Isaac Bogoch, an infectious-diseases physician at Toronto General Hospital. “There was ongoing transmission of COVID-19 on the cruise ship.”

In response to mounting criticism, including from an infectious-diseases professor who posted a video to YouTube this week describing wholly inadequate infection-prevention measures he witnessed on the Diamond Princess, the Japanese government said it has taken many steps to prevent the spread of the virus.

But Jason Kindrachuk, Canada Research Chair in emerging viruses at the University of Manitoba, said it’s clear something went awry. It’s difficult to properly execute any quarantine, and the realities of a cruise ship, where space is limited, seems to have actually helped the virus spread, he said.

“You may be able to keep people in their rooms, but are you absolutely ensuring there is no contact between people that are sick and those that are healthy?” Dr. Kindrachuk said. “Symptoms aren’t always going to be really pronounced in patients. Do people maybe start to take a lower number of precautions if they don’t feel sick or don’t seem sick?”

On Friday, the International Transport Workers’ Federation said that 70 crew members on the ship have been infected with the virus and that it was a “mistake” to keep the 1,004 on board during the quarantine.

“I feel that their health was put at a level below that of the passengers, which I just feel is rather unethical when you’re dealing with a quarantine situation like this,” said Mr. Fehrenbacher.

Some Canadian passengers questioned why the federal government didn’t move faster to repatriate passengers on the Diamond Princess. Rose Yerex of Port Dover, Ont., used Facebook to update her friends about her experience in quarantine. Earlier this week she expressed frustration about the lack of communication from the government. Shortly before the quarantine lifted, Ms. Yerex and her husband tested positive for the virus and now must remain in Japan.

Federal Health Minister Patty Hajdu said Canadian officials will closely analyze the situation to piece together what went wrong, a pressing task given that Canada’s tourist season, which sees a lot of cruises coming to the country, is about to get under way.

“There has been, obviously, concern about the practices on board the ship that have potentially led to the increased spread of the coronavirus on the ship,” Ms. Hajdu told reporters this week. “Certainly something for us to keep our eye on as we enter into cruise season.”

A total of 129 Canadians and family members arrived back in Canada on Friday after a long journey from Tokyo. They will undergo another 14-day quarantine period at the NAV Centre in Cornwall, Ont.

Officials say the passengers have been through a major ordeal and mental-health support will be available to those under quarantine. For Ms. Clement, one of the passengers who was on the charter flight, it will take time to deal with the psychological consequences of their time on board the Diamond Princess.

Ms. Clement said she and her husband have become “hypersensitive,” feeling emotional when speaking to family back in Canada or even watching a movie.

“We do expect ‘aftershocks’ after all of this,” Ms. Clement wrote in a series of instant messages. “You can’t just go through this experience and expect it just to go away.” 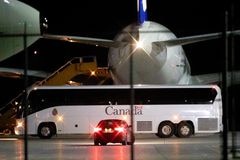 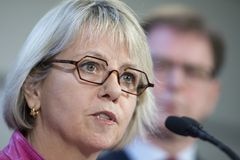