On Labour Day in 1995, a group of Indigenous activists built barricades in Ipperwash Provincial Park, in protest against the federal government’s failure to return appropriated land. The next day, Ontario Provincial Police sent in a riot squad to confront the group, and Dudley George, an unarmed protester, was shot dead. A provincial inquiry looked into allegations that the OPP raid may have resulted from political pressure to end the protest.

A quarter-century later, on a site 450 kilometres to the east near Belleville, Ont., Indigenous protesters have stopped the transport of freight and passengers from Toronto to Montreal with a days-long demonstration near the railway. That same police force appears to be standing down, despite a court injunction obtained by CN that would allow them to arrest activists.

The protest, which began on Feb. 9, is in solidarity with the Wet’suwet’en anti-pipeline movement. Police have arrested dozens of protesters in B.C. Meanwhile, activists in Manitoba removed their railway blockade Thursday. But tensions continue to rise in Ontario.

Jeffrey Monaghan, a Carleton University criminologist and author of 2018′s Policing Indigenous Movements: Dissent and the Security State, explained to The Globe and Mail’s Dakshana Bascaramurty that the force’s high-profile history confronting Indigenous protesters has complicated its response to current protests.

How do police forces calculate when to move in and make arrests?

My work looks at all the pre-emptive and preparatory work that they do, the risk analyses and the kind of surveillance they do leading up to these confrontations. They have different ways of analyzing risk and grading it at a certain level. All that preparatory work [by the OPP] is there but I don’t necessarily think that’s how it’s playing out on the ground.

How are things playing out?

I think there’s probably a lot of acrimony and disagreement within the OPP about what to do. I think there are sectors within policing, especially the OPP post-Ipperwash Inquiry, that value some of the lip service they give to relationships and liaising with Indigenous communities, and I think they know that goes down the [toilet] if they bluntly enforce. There’s a sector within the larger policing community that knows very well that they can’t arrest their way out of this problem.

And I think there’s another part of the OPP, especially their handling of Caledonia (where a land dispute boiled over into violent confrontations between Six Nations protesters, non-Indigenous residents and the OPP), that is more gung-ho and interested in enforcement.

I think that [the whole force] ultimately is, I think to its credit, trying to force political leadership to step in.

And what have we learned from Ipperwash, from Caledonia, on political interference or political direction on police?

In terms of political interference, I think one of the major foundations that was reaffirmed after Ipperwash was that police discretion should rule the day and operational decisions should be a police outcome and not a political outcome. It gives a lot of operational discretion to the OPP of when to enforce or what to enforce. For me, what really comes out of the Ipperwash Inquiry is that blunt, really militaristic responses can have really significant negative implications and that they can escalate really, really dramatically.

I think a second takeaway the OPP really has to consider going forward is the really stark revelations from the Ipperwash Inquiry about the racism within police culture. The everyday brotherhood who saw Indigenous people as obtuse, obstructive, having less rights. I think the OPP is in a really difficult situation because that wasn’t long ago. They want to demonstrate that they’ve changed policing culture.

We saw protesters in Manitoba take down their blockade but it doesn’t seem like that’s going to be happening any time soon in Ontario. Can you tell me about the very high-profile history of protest in Ontario and how that might be playing into how they’re strategizing here?

As an outsider and a non-Indigenous person, when I see the prominence that they’re giving to the Two-Row Wampum [an agreement between the Haudenosaunee and European settlers meant to represent the journeys of two nations that run parallel but do not interfere with each other], it’s to recognize that this is a nation-to-nation situation. The people who are demanding recognition are demanding it on those terms. So sending in the police, fundamentally, is antagonism.

[There must be] a recognition that this isn’t a policing problem, this is a political problem, and there has to be a meeting. It’s all been ‘What are the police going to do? Is this criminal? Is this really the rule of law or not?’ It’s stuck in a present-mindedness in treating this like a crime problem. 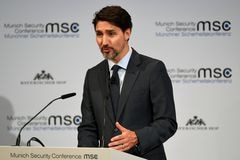 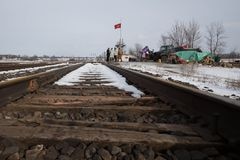 Portrait of a protest in Tyendinaga Mohawk Territory in support of the Wet’suwet’en
February 12, 2020 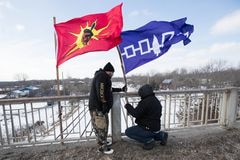