Police say human trafficking is strongly linked to high rates of violence against Indigenous women and girls, but there are major knowledge gaps that keep pervasive trafficking activities hidden in plain sight.

RCMP assistant commissioner Joanne Crampton told the National Inquiry into Missing and Murdered Indigenous Women and Girls on Monday that current statistics on human trafficking fall short of capturing the scope of the issue.

Crampton presented data showing 455 known cases involving human trafficking specific charges between 2005 and 2017, but she said there’s a huge gap between those numbers and the reality.

“I think it’s a huge under-reported number,” Crampton said. “We’re very confident that those stats are not anywhere near what the real picture would be.”

The inquiry is holding its final hearings this week in St. John’s, N.L., with experts providing testimony on sexual exploitation, human trafficking and sexual violence.

Crampton touched on the challenges of policing when it comes to human trafficking in Canada, citing a lack of accurate data stemming from under-reporting and the vulnerabilities of Indigenous women to exploitation.

The data available on trafficking is broken down in some cases by age and gender, but does not include information on the victims’ race.

Crampton said this is one of many gaps in the current picture of human trafficking in Canada, a wide-reaching phenomenon the RCMP is aware of, but doesn’t have accurate data to back up.

Crampton explained that human trafficking has only been a crime under Canada’s criminal code since 2005, and since then the law has been “very under-utilized” by law enforcement and the judicial system.

She said many cases, if they are detected, the cases are classified as assault instead of trafficking.

Crampton stressed the necessity of collaboration across multiple police jurisdictions in tackling trafficking cases, and said she hopes the inquiry’s final report will help with the current issue of under-reporting.

Insp. Tina Chalk testified about her work training the Ontario Provincial Police to recognize the signs of trafficking, saying she likely missed instances of it earlier in her career because she couldn’t detect the signs and didn’t ask victims about their experiences.

“I’ve spoken to many of my colleagues, and they think the same thing. We probably missed it,” Chalk said.

Chalk said there have been definite gaps in the OPP’s training, saying she thinks there has been insufficient training around the vulnerabilities of Indigenous populations.

One piece of new training meant to address these gaps involves making police officers aware they should look for signs of trafficking in unexpected places like routine traffic stops.

Chalk discussed how experiences with poverty, isolation, past abuses and encountering racism make victims especially vulnerable to trafficking, and addressed the role of the Internet in luring people.

She mentioned educational initiatives for people in other occupations who often come in contact with trafficking situations, like truck drivers, hospitality workers and health care workers, so they can more easily detect the warning signs.

Chalk also addressed the importance of improving the relationship between Indigenous people and the police.

She said educating the public about the realities of human trafficking is essential so victims understand that what is happening to them is a crime, but acknowledged that trust in law enforcement must be built so victims feel comfortable coming forward.

“Police trust is absolutely lacking,” Chalk said. “That’s a long road and that’s a road that police are responsible for.”

Boland discussed instances of the police failing Indigenous women in St. John’s, citing one story he read about an Indigenous woman trying to report an assault and being turned away by police.

Boland said he’s trying to change the culture of his police force with a zero-tolerance policy towards exploitation of vulnerable people, including Indigenous people.

“If you come to work and you think you’re going to abuse the uniform that you wear and your position of authority, then I will do everything in my power to rid the organization of you.”

Dobson said the Ontario government is in the early stages of developing services for victims, and said more understanding of the issue is necessary to helping victims.

Commissioner Michele Audette opened the day noting the historic significance of the hearings.

Audette said inquiry staff did the best they could despite the federal government’s recent rejection of the inquiry’s request for a two-year extension, opting instead for six months. 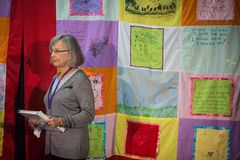 Opinion
Without a focus, MMIW inquiry will slide toward irrelevancy
November 29, 2017 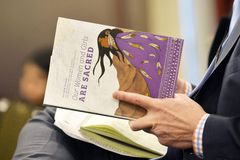