Humboldt Broncos captain Logan Schatz was remembered as a kind, hard-working leader at his funeral on Sunday at a curling rink in his hometown of Allan, Sask.

Schatz was among the 16 people killed on April 6 when the junior hockey team’s bus collided with a semi-trailer at a rural Saskatchewan intersection north of Tisdale while travelling to a playoff game.

Thirteen others were injured.

Schatz was a forward, was in his fourth full season with Humboldt, and had served the last two-and-a-half years as the team’s captain.

Team pastor Sean Brandow recalled how Schatz recently bought a coffee for a woman behind him in a drive-thru. The woman was able to get Schatz’s number and texted him to say thanks. He replied saying that it was no problem and thanked her for her work in the community.

Brandow also described Schatz as a winner who always thrived for greatness.

After his speech, Brandow walked up to Schatz’s parents – Bonnie and Kelly Schatz – who were wearing his Broncos jerseys, and gave them a hug.

Teacher, coach and friend Craig Reinhardt acknowledged the respect that Schatz showed for those around him throughout his life.

Green and yellow drapes hung at the front of the stage and jerseys with the number 20, which was also Schatz’s age, were also at the front along with bouquets of flowers.

The seats at the curling rink, as well as the overflow seating above the ice surface, were full and mourners also filled a hockey rink that’s part of the community facility.

People showed up in their hockey jerseys ranging from Broncos to Toronto Maple Leafs. Humboldt Mayor Rob Muench was also in attendance.

Ball hockey was another one of Schatz’s passions and he represented his country in the sport. He also excelled at track and field and loved to golf.

He was noted for being the life of the party and “was the beer pong champion,” according to the program from the service.

One of the songs performed during the service was a rendition of Chris Stapleton’s “Broken Halos.”

Schatz is survived by his parents, three sisters, a brother, a niece, two grandparents and a girlfriend. 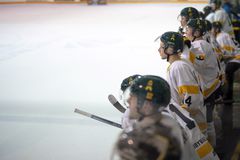 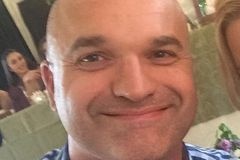 Healing in Humboldt: A look at small-town Saskatchewan spirit in action
April 13, 2018 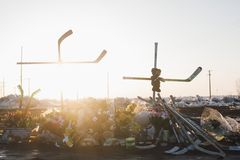