Scott Thomas tried several times to write a victim impact statement about his only son. Words would not come.

“I would sit down and start and then stop,” Mr. Thomas says.

Finally, one morning, instead of writing a statement he authored a letter to Evan, who was an 18-year-old forward for the Humboldt Broncos. Mr. Thomas will read it in a makeshift courtroom in Melfort, Sask., this week as part of the next phase of proceedings related to the April 6, 2018, bus crash that claimed the life of his son and 15 others.

The collision, the worst of its kind in Canadian sports history, killed 10 players between 16 and 21 years old, along with two coaches, an athletic therapist, a broadcaster, the bus driver and a high-school student volunteering as a statistician.

All 13 of the remaining passengers were injured, including two players who are paralyzed and one who is still in the hospital recovering from a brain injury.

The driver of the semi-tractor trailer that struck the bus at the intersection of highways 35 and 335 pleaded guilty this month to 16 counts of dangerous driving causing death and 13 counts of dangerous driving causing bodily harm. Jaskirat Singh Sidhu of Calgary faces a maximum sentence of 14 years. His lawyer said after the guilty plea that Mr. Sidhu, 30, accepted responsibility and wanted to spare the victims' families from sitting through a trial.

This week, he will hear how his actions forever changed their lives. Five days have been set aside for families and loved ones to speak about their losses. One family alone has submitted a dozen impact statements.

“I don’t care if his sentence is a day or (14) years,” Mr. Thomas says. “There has to be a debt paid to society and there has to be some sort of punitary effect. But to me, the number is irrelevant.”

The Junior-A level team was on its way to a Saskatchewan Junior Hockey League game in Nipawin when the crash happened. The Broncos trailed the Nipawin Hawks three games to one in a seven-game playoff series and were determined to win that night and prolong their season.

That afternoon, Broncos players picked up a pregame meal, watched videos of previous games in their dressing room and then boarded their bus for a two-hour trip. They were 20 minutes from Nipawin when the collision happened.

Photos of the scene showed the chartered motor coach on its side with much of the front half missing and the roof ripped off. Hockey bags and sleeping bags were scattered in the snow.

“I relive the last two seconds of Evan’s life every day,” Mr. Thomas says. He sits beside a fireplace in a restaurant in Saskatoon and speaks quietly. “It would have been one breath. He was probably laughing and joking with his buddies and probably had a smile on his face. It is a testament to how fragile life is.”

The last that one survivor remembers, Evan was standing in the middle aisle and beginning to dress for the team’s arrival. He had put on a pair of dress pants and a nice shirt when the bus driver suddenly stomped on the brakes and everything went black.

As days passed and funerals began, a memorial grew beside the highway where the crash occurred. Snow partially covers a roadside shrine beside the highway. There is a cross for each of the 16 victims. Hockey sticks lean against each one.

Mr. Thomas is a former junior hockey player and a part-time scout for the Edmonton Oil Kings of the Western Hockey League. For five years, as a member of the Tacoma Rockets and the Moose Jaw Warriors of the WHL, he rode a bus.

“It is a safe place for those kids,” Mr. Thomas says. “They can get in there and shut the world off.”

He was a young man in 1986 when he attended a vigil for four players from the Swift Current Broncos who died in a bus crash in Saskatchewan on the Trans-Canada Highway. Never could he imagine that he would endure something so terrible in his own life.

Evan was a first-year player in Humboldt and team member for six months. The Thomas family, which also includes his mother, Laurie, and 16-year-old sister, Jordyn, is from Saskatoon.

It was the first time Evan had ever lived away from home. When the team had a few days off, he would drive the hour-plus home. Often he would show up unannounced in the middle of the night.

“He was just starting to get life figured out and turning into a man,” Mr. Thomas says. “He was finally becoming a friend to me after my being hard on him in his teenage years.

“He would have been a hell of an adult.”

Mr. Thomas was driving to the game in Nipawin with the father of one of the Hawks players when they learned there had been a serious crash. They came upon the scene, and immediately Mr. Thomas’s heart sank.

From all those years he spent playing hockey, he knew the rookies sit at the front of the bus. There was nothing left of it.

When he identified his son’s body, he leaned down and gave Evan a hug and kissed him on the forehead. Mr. Thomas is a chiropractor and could feel the skull fractures that killed him.

The family will be in Melfort this week along with so many others. There have been sad milestones that seemingly never end. There is the hearing this week, which will be followed by sentencing, and then, soon, the first anniversary of the crash.

“There has never really been a moment where we can just take the time to grieve,” Mr. Thomas says. “We want to celebrate the life we had. We want to get on and be with Evan.”

Almost a year after Humboldt crash, entry-level training for semi-truck drivers to be implemented across Canada
Subscriber content
January 21, 2019 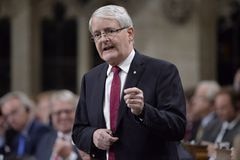 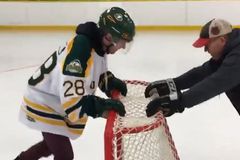