The head coach of the Humboldt Broncos says his Saskatchewan junior hockey team will push for seat-belt use on team buses after a deadly crash in the spring.

In a statement, the Broncos said their coaches, players and staff will buckle up not only when travelling to games but also in their day-to-day lives.

“Encouraging the use of seat belts cannot be understated,” said Nathan Oystrick, who was hired as the coach and general manager in July. “Promoting seat-belt safety is a high priority for us.”

Seat-belt use on buses has been in the spotlight since April when a bus carrying the Broncos collided with a truck in rural Saskatchewan. Sixteen people were killed – including 10 players and the team’s head coach – and another 13 players were injured.

Transport Canada announced in June that the department will require all newly built highway buses to have seat belts by September, 2020. Some charter bus companies say many of the new buses already have seat belts but there is no way to ensure everyone is wearing them.

Seat-belt use falls under the jurisdiction of the provincial and territorial governments, and is enforced by police in each area. Many provinces and territories – including Saskatchewan, Alberta and British Columbia – require motorists and passengers to wear seat belts if they are provided.

In a brief interview, Mr. Oystrick said the team wants to advocate for seat-belt use.

“We’re wanting to be involved in the process and involved in some of the change,” he said Friday.

The statement from his team said they will be looking at various activities to promote seat-belt use that include education, media and public awareness through this hockey season and into the future.

Officials with the 12-team Saskatchewan Junior Hockey League, which includes the Broncos, said they’re encouraging players and coaches on all teams to wear seat belts when they are provided.

“It’s just an education process,” said president Bill Chow. “By maybe just changing the culture and changing the thinking of anybody and everybody, maybe this becomes more of a habit.

“We can’t force anybody to wear them but, if we make them aware that it’s a law and as a league we are supporting this and encouraging this — that they wear it — that’s from our point of view, that’s what we can do.”

The focus on seat belts comes after the parents of several Broncos players who died have called for mandatory use on all team buses.

A lawsuit filed by the parents of Adam Herold in July asked for a court order requiring all buses carrying sports teams in Saskatchewan to be equipped with seat belts.

Earlier this month, the mother of Stephen Wack, one of the 10 Bronco players who died, wrote an opinion piece that ran in newspapers across the country asking for shoulder harness belts on all coach buses, along with the need for legislation making it compulsory to wear them.

Tricia Wack concluded her opinion piece by asking people to buckle up for the Broncos and the hashtag #buckleupforthebroncos was born.

Another parent, Toby Boulet, whose son Logan was killed in the crash, has made it a point to wear his seat belt on the bus this season as the general manager of the University of Lethbridge Pronghorns women’s rugby team.

His example led the team’s head coach, Neil Langevin, to challenge the rest of the team to make it a habit to wear their seat belts.

All of the coaches and at least half of the players on the Pronghorns are now buckling up when the bus has seat belts available. 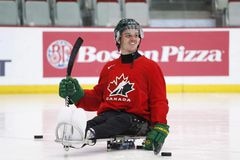 NHLers react to Humboldt Broncos’ return to the ice after bus tragedy
September 13, 2018 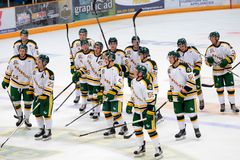 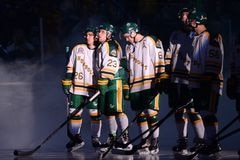