More than a year after a deadly bus crash that devastated their junior-hockey team and the country, Tyler Smith and Kaleb Dahlgren are focusing on healing and building their futures.

Airing Thursday on CBC-TV, the documentary Humboldt: The New Season shows the two crash survivors and others as they try to recover and move forward from the trauma of April 6, 2018, when a semi-trailer unit collided with the Humboldt Broncos team bus in rural Saskatchewan. Sixteen people died and 13 were injured.

“It’s impossible to try to fully heal or get that closure … but now it’s more or less doing the proper things, and seeking out help when you need and not forcing it,” says Smith, 21, who returned to play with the team for a bit last season, and then decided to go home to focus on himself and his loved ones in Leduc, Alta. This fall, he’ll enter the radio and television program at the Northern Alberta Institute of Technology.

“Controlling the things I can control has helped me tremendously throughout this process,” says Saskatoon-based Dahlgren, 22, who is undergoing craniosacral therapy for a third-degree brain injury he suffered in the crash. He’s also trying to get medical clearance to play in a hockey game again, and will continue his business commerce degree at Toronto’s York University this fall with the goal of possibly shifting into chiropractic studies.

Kevin Eastwood and Lucas Frison co-wrote and co-directed Humboldt: The New Season, which follows five of the survivors and some of the families of the deceased as the 2018-2019 Humboldt hockey season unfolds with a different coaching staff and some new teammates. The film also touches on the trial and the sentencing of the truck driver who caused the accident.

Frison says late Broncos’ assistant coach Mark Cross, who died in the crash, was his best friend growing up in Strasbourg, Sask. They were “inseparable” since they were about three and played hockey together, so once the grief and shock of the tragedy wore off, Frison knew his next project had to commemorate Cross in some way.

“I guess it would be part of the healing process for me,” Frison says in a phone interview from Regina, noting Cross’s father introduced him to the Broncos families.

“We didn’t want to be just another camera to the players and the families. My friendship, my connection with Mark, that helped us build relationships. And ultimately, the relationship building – that was a very rewarding part of this project, getting to know so many of these really courageous people.”

Frison started rolling cameras in August, 2018, and shot throughout the team’s entire season as some players returned. Smith played 10 games before moving back home to Alberta to continue his healing.

“I think for my healing and for my growth, it was a good thing to go back and prove to myself that I could still do it,” Smith says.

“Now, I necessarily don’t have to live with the regret of not knowing if I would have went back. So I’m really proud that I went back, and I hope my angels and everybody else is really proud.”

Smith says his “angels” are the 16 who died in the crash.

“I know my angels would really want me to live my life like they know I would want to,” he adds, referring to his choice to leave the team. “So it’s now just focusing on what I want to do, and being with family and friends. Taking each day one step at a time and trying to live for them as well.”

“I feel like they’re definitely watching over me in everything I do and are always with me no matter what,” Dahlgren says, noting he felt like they were with him when he returned to the ice for the first time since the crash last June.

“It felt really special getting back on the ice, especially wearing the Humboldt stuff was something unbelievable as well. It felt like home and it wasn’t just myself out there. It felt like there were lots of other people out there too.”

Humboldt Broncos player who broke his back in fatal bus crash to try out for team again this season Subscriber content
July 22, 2019 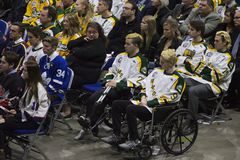 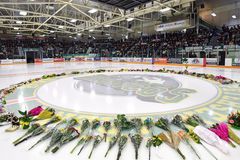 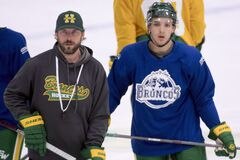