Quebeckers whose homes are repeatedly flooded may eventually be forced to move, Premier François Legault said on Sunday as he toured an area enduring its second bout of spring flooding in three years.

Mr. Legault visited Laval’s Île Bigras, where soldiers from the Canadian Armed Forces were busy stacking sandbags up a barrier along the shore’s edge as the already-swollen river threatened to further spill its banks.

He noted that many residents in the same areas were still in the midst of renovating their homes after flooding in 2017.

As a result, Mr. Legault said the government was reviewing its programs to ensure that those who need compensation get it earlier, but also that there are incentives in place for those who want to move to higher ground.

“We have to adjust our programs to rapidly compensate people who have cleanup, renovations to do,” he told reporters. “But we have to be clear-headed, and if its necessary to force people to move, we’ll do it.”

Mr. Legault said he doesn’t want taxpayers to be on the hook for repairing the same homes over and over again, especially when such events appear to be happening more frequently, possibly because of climate change.

He did not specify how the program would work, but said the government may put a limit on the amount of repair money a homeowner can receive before they are asked to move.

While also experiencing significant flooding, New Brunswick’s Premier is urging residents to do what they can to protect their families and property.

“We won’t hesitate to declare a state of emergency if public safety demands it,” Blaine Higgs told a news conference on Sunday in Fredericton, the community that appears to be dealing with the most challenges as the Saint John River keeps rising.

“I must stress that this is a very hazardous and difficult situation and we are certainly not out of the woods,” Mr. Higgs said.

The extent of damage in New Brunswick remains unclear, but officials confirmed on Sunday there were some flooded basements in Fredericton, where up to 200 homes had been affected by the rising river.

The province’s Public Safety Department said residents in other communities along the river should remain on high alert in the coming days.

The department said the Saint John River Basin is now beyond or nearly at flood stage in Clair, Saint-Hilaire and Edmundston in the north, and in Fredericton, Maugerville, Jemseg and Sheffield-Lakeville Corner in the south.

“For residents who haven’t yet been impacted, I would urge you not to be complacent,” Mr. Higgs said. “Be informed about the risks and take preventative measures and consider voluntary evacuation.”

The Premier said the province will be seeking disaster assistance from the federal government.

About 120 soldiers from Canadian Forces Base Gagetown in southern New Brunswick have been dispatched to help residents.

Near the entrance to the island on the southwest edge of Laval, Que., several roads were closed because of flooding and one home appeared partially surrounded by water as small waves lapped at a picnic bench and a “For Sale” sign on the lawn.

But Mr. Legault said he hoped the current flood would be less catastrophic than in 2017 because of better preparation, which included delivering sandbags to homes at risk of flooding and the government’s decision to call in the army before the situation got out of hand.

But the positive words didn’t lessen the anxiety for homeowners Anna Lin and Eddy Girard, who on Sunday afternoon watched the river rushing along the edge of their lawn on Île Bigras.

Since the 2017 floods, the couple has spent hundreds of thousands of dollars on major renovations, including raising the entire home and building a waterproof basement.

“It’s discouraging, hard on the morale, hard on the family,” Mr. Girard said. “Do we rebuild, do we let it go? We have to look to the future.”

Ms. Lin and Mr. Girard said that many of their neighbours are still in the process of rebuilding from the last floods after having to wait months or years for government compensation or simply the permission to rebuild. The house next to theirs was demolished and the one next to that is still under construction.

The couple has spent the last few days laying down sandbags, sealing windows moving items to higher ground. They say municipal and provincial officials appear much better prepared this time, and are hopeful the water will stay out their home. If it doesn’t, they’re not sure what they’ll do.

Many people across Quebec and New Brunswick have been filling sandbags in an effort to protect their homes, as officials warned water levels are expected to rise in many regions because of warming temperatures that contribute to snowmelt and ice movement.

About 200 soldiers started filling sandbags and carrying out evacuations in Quebec’s Outaouais and Mauricie regions overnight, and by Sunday afternoon about 600 were on the job across the province.

Public affairs officer Pierre Leblanc said the army’s priority in the Laval area would be filling and stacking sandbags and protecting critical infrastructure near the river, which he said was rising about one centimetre each hour.

Urgence Quebec said that as of Sunday afternoon, 1,280 residences across the province had been flooded and more than 1,500 people had left their homes.

Five major floods were identified as threatening thousands of Quebecers and so far one death has been blamed on the high water.

Police say 72-year-old Louise Seguin Lortie died Saturday morning after driving her car into a sinkhole caused by flooding in the Pontiac area, about 30 kilometres northwest of Ottawa.

Some of the worst flooding has been in the Beauce region south of Quebec City, where 883 homes were swamped and 765 people evacuated by Sunday morning, up from 94 the previous day.

Meanwhile, about 120 Canadian soldiers were being deployed across western New Brunswick to help residents threatened by rising flood waters.

Fifteen communities in that province have been warned to remain on high alert. 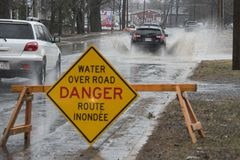 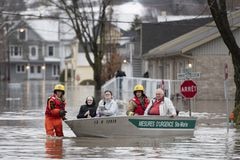 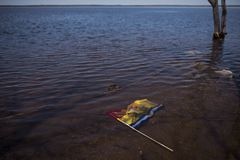