The City of St. John’s is asking residents to stay home out of it – as the Newfoundland and Labrador saying goes – so crews can clean up the torn branches, downed power lines and scattered debris flung about the streets by hurricane Larry.

The storm made landfall as a Category 1 hurricane along the southern coast of the island at 11:45 p.m. Atlantic time on Friday, bringing sheets of rain and sustained winds of up to 130 km/h across the Avalon Peninsula, which includes the provincial capital of St. John’s. Wind gusts reached at speeds as high as 182 km/h, according to measurements at the Cape St. Mary’s Lighthouse.

In the past 70 years, only 23 hurricanes or post-tropical storms of hurricane strength have made landfall in Canada, according to the Canadian Hurricane Center.

The winds resulted in massive storm surges that brought waves up onto the road in places such as St. Vincent’s, a popular spot to watch whales along the southern Avalon. In St. John’s, the streets were lined with branches torn from trees, debris pried from houses and, in the Rabbittown neighbourhood, a tossed-about easy chair.

Still, he said, “it could have been a lot worse.”

The Royal Newfoundland Constabulary, the province’s police, planned to deploy the same team that worked during the “snowmageddon” of last year, when a winter storm dumped about 30 inches of snow in St John’s, James C. Cadigan, a spokesperson, said Friday.

Larry came barrelling across the Atlantic and up into Placentia Bay, a wide expanse of water separating the Avalon Peninsula from the rest of the island, just as high tide set in. The storm surges combined with the high water levels wreaked havoc in some of the coastal communities along Placentia Bay.

Alex Best woke up Saturday morning to find his wharf in Southern Harbour had just about washed away -- and it almost took his boat with it.

The 86-year-old retired fisherman said he hasn’t seen high water conditions like those wrought by Larry in many decades.

“Our environment’s going so bad, I mean that’s what’s causing us to have so may storms so often now,” he said in a phone interview Saturday. “And we’re not doing anything to fix it, either – only letting it get worse all the time.”

Sitting on his deck Saturday and surveying the damage, Best said he’s taking it all in stride.

Along the western coast of Placentia Bay, in Marystown, the fire department had to evacuate two houses because the water was creeping up to their front doors, said Fire Chief Justin Bolt. “Residents in that area hadn’t experienced the water to that height from previous storms,” he said. “There was a personal wharf in that area that they just managed to secure to prevent it from going afloat.”

Larry felt comparable to hurricane Igor, Bolt said, which caused widespread damage across the island in 2010 and even swept a man out to sea.

After striking Canada, Larry is moving north toward Greenland, where residents are bracing for a hurricane season oddity: a blizzard caused by the remnants of a tropical storm.

Forecasters said the storm could bring up to four feet of snow in parts of the subarctic island, an event meteorologists described as rare and emblematic of a year filled with extreme weather that has been intensified by climate change.

“It was unusual in itself that Larry made landfall in the Canadian maritime,” said Ben Gelber, a meteorologist with WCMH-TV in Columbus, Ohio. “But this is extraordinary.”

Larry weakened to a post-tropical cyclone Saturday morning, but it was still racing toward Greenland at 48 mph, the National Hurricane Center said.

Moving at a high latitude, Larry was expected to transition into a winter storm before hitting the island by Sunday, causing up to 18 inches of snow to fall in the eastern parts, and up to 4 feet in higher elevations, according to the weather station at the airport in Nuuk, the capital of Greenland.

The Hurricane Center said Larry would lose its tropical storm characteristics and then become a potent winter storm near Greenland by the end of the weekend.

Back in St. John’s, nearly 10,000 people in the area were still without power on Saturday evening, Newfoundland Power’s website said. Earlier in the day, more than 30,000 in the metro region were in the dark. The winds tore part of the roof of Mary Queen of Peace Elementary School and it lay in a heap of siding and nail-riddled boards some distance away. A huge blue tent set up along Quidi Vidi lake to house a music festival was stripped to its frame, and the road-facing windows were shattered in an empty building in the nearby Rawlins Cross intersection.

But people stayed inside as the winds did their worst, and nobody was hurt, Breen said. He noted the last time he assembled media for a press conference following a weather emergency, it was January 2020, after the record-breaking snowstorm now called “Snowmageddon.” That storm forced city officials to declare a state of emergency for about a week.

That won’t happen this time, Breen said. If people stay off the roads and let crews clean up, he said life in St. John’s post-Larry would return to normal by Sunday.

With reports from The New York Times. 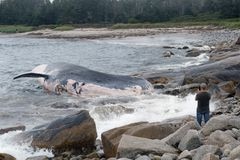 Hurricane Larry could be headed for Newfoundland on Friday, but track uncertain
September 7, 2021 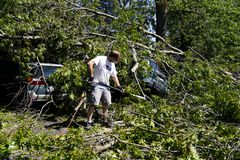