The number of COVID-19 patients in intensive care units across the country has reached a near record as the spread of more contagious variants drives up hospitalizations, prompting Ontario officials to scale back on non-urgent procedures.

Canada’s chief public health officer says the number of new COVID-19 cases linked to variants of concern has doubled over the past week, with B.1.1.7, first identified in the U.K., “essentially replacing” pre-existing versions of the virus.

Dr. Theresa Tam said the predominance of these strains is fuelling a rapid COVID-19 resurgence that is sending more patients to hospital with severe illness, including young people, and threatens to push intensive care units to their limits.

“The race between the vaccine and the variants is at a critical point,” Tam told reporters Friday. “It is clear that we need stronger control to combat variants of concern that are driving rapid epidemic growth in many areas of the country.”

Last week, hospitals treated an average of more than 2,500 patients with COVID-19 each day, up seven per cent from the previous week, said Tam.

That includes 860 patients in intensive care, she said, amounting to a 23 per cent increase over the previous week.

The recent rise in critical cases is approaching a peak seen earlier this year, when for the seven days ending Jan. 19 officials reported an average of 880 people in the ICU and 4,775 in hospital overall.

An average of more than 6,800 new cases and 30 deaths were reported daily over the past week, said Tam.

She said these numbers are consistent with the rapid resurgence trajectory outlined in federal forecasts two weeks ago.

Even as several provinces tightened public health restrictions this week, Tam warned that case counts will likely continue to climb as the fallout from holiday gatherings emerges.

“Many of my colleagues are of course worried about what happened at the Easter long weekend, so all of that will be playing out,” said Tam. “Right now, what is of concern to me is the ICUs filling up.”

To avoid this deadly scenario, Ontario hospitals have been instructed to start ramping down elective surgeries and non-urgent procedures next week to ensure they have resources to treat a growing number of COVID-19 patients.

The president and CEO of Ontario Health – which oversees the province’s health system – told hospitals to make the move as the number of COVID-19 patients in the province’s intensive care units hit a new high.

“We are facing mounting and extreme pressure on our critical care capacity,” Matthew Anderson said in a memo issued Thursday night, asking hospitals to identify staff who may be redeployed to other sites if necessary.

There were 552 patients with COVID-related critical illness in Ontario intensive care units as of Friday morning, according to the Ministry of Health.

The province reported 4,227 new cases of COVID-19 and 18 additional deaths from the virus.

Premier Doug Ford said the province is doing its part to address the health-care capacity crunch by ramping up its vaccine rollout to give 40 per cent of adults in Ontario their first shot over the next four weeks.

“The quicker we can get these vaccines into people’s arms, the quicker they’re going to be able to resume the surgeries,” Ford said.

In Saskatchewan, a group of 285 doctors banded together to urge the provincial government to implement stricter COVID-19 health measures and vaccinate younger essential workers.

Also on Friday, Quebec announced a new single-day record of 69,148 COVID-19 vaccines administered on Thursday as stricter public health protocols take hold in some parts of the province.

The provincial government has extended a health order in Quebec City, Levis, Gatineau and several municipalities in the Beauce region until at least April 18. Emergency measures include closing schools and non-essential businesses in those areas and applying an 8 p.m. curfew.

Starting Sunday, Montreal and Laval will also return to an 8 p.m. curfew.

Prime Minister Justin Trudeau told a news conference that the federal government has delivered more than 10.5 million doses of COVID-19 vaccines to the provinces and territories.

Canada is expected to have received at least 44 million doses from Pfizer, Moderna and AstraZeneca by the end of June, Trudeau said.

Stricter action called for in B.C. with COVID-19 variants projected to climb into May
April 9, 2021 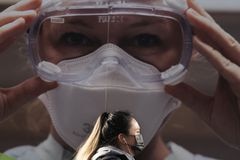 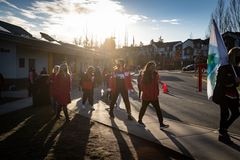 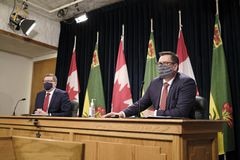