As Ontario embarks on an ambitious plan to start widespread testing of asymptomatic individuals for COVID-19, medical experts warn that unless it’s done carefully and methodically, such a strategy could create more problems than it solves.

Asymptomatic testing – or checking individuals with no symptoms to see if they are infected with COVID-19 – is seen by many as an important tool in detecting and containing the spread of the disease in people unaware they have it. Earlier this month, for instance, officials in the Chinese city of Wuhan, where it’s believed COVID-19 emerged last year, tested millions of its citizens after a handful of new cases of the disease were reported.

Ontario is launching a new strategy this week to conduct testing of asymptomatic people in high-risk settings, such as taxi drivers, workers in meat-processing and auto plants, and school-aged children.

But the province also announced Sunday that it’s broadening the criteria for individuals in the community who want to get tested. Now, any asymptomatic people who fear they’ve been exposed to COVID-19 or people whose jobs put them at risk of exposure, such as health care or grocery store workers, can go to an assessment centre to be tested.

Ontario Premier Doug Ford urged thousands of people who gathered in Toronto’s Trinity Bellwoods Park on the weekend, as well as anyone who took part in a large gathering, to take advantage of the expanded criteria to get tested.

“Go out there, get tested,” Mr. Ford said on Monday.

Toronto and Ontario health officials later said that anyone at Trinity Bellwoods should self-monitor themselves for 14 days and get tested if they develop symptoms.

Bonnie Henry, British Columbia’s Provincial Health Officer, who is widely regarded as one of the driving forces behind the province’s ability to flatten the curve and stop outbreaks at long-term care homes and meat-processing plants, says that when it comes to asymptomatic testing, it’s more important to target specific groups than to test an entire population.

“As we’ve learned more over the last few months about the virus, we’ve also learned more about the test and the limitations of the test,” Dr. Henry said in a recent interview. “They can miss things.”

Dr. Henry, who did not comment on Ontario’s plans, said one of the main problems with testing a wide swath of people without symptoms is a lack of accuracy that can provide misleading results and unnecessarily occupy vital public-health resources.

While the COVID-19 diagnostic test is sensitive, it’s known to produce false-negative results, such as in people who are in the presymptomatic phase of their illness, Dr. Henry said. False positives are rarer and are more often the result of test contamination, but they also occur, she added.

“If you test a whole lot of people randomly, you’re going to have a lot of false negatives and a lot of false positives, so that’s the challenge that we have right now,” she said.

The potential consequences are significant. For instance, people with a false positive will mistakenly believe they will be immune to COVID-19 after they recover. And people who return a false-negative result will believe they don’t carry the infection, which could increase the likelihood of them going out in public or returning to work and transmitting the disease.

Public-health officials also have to conduct detailed contact tracing of any positive results. So testing a major chunk of the population will inevitably mean officials spend time tracking down contacts of people with false-positive results, which detracts from the time spent focusing on true positive cases.

For those reasons, B.C. is focused on looking for the disease in high-risk settings where one positive case could quickly escalate into an outbreak.

Under B.C.'s strategy, anyone with symptoms can get a test, as well as anyone who goes to the hospital with a respiratory illness. But the province reserves asymptomatic testing for high-risk situations. For instance, if someone in a long-term care home, meat-processing plant or correctional facility tests positive, everyone in those facilities will be tested.

Unlike testing the wider community, focusing on those high-risk groups where COVID-19 may be spreading means the results are more likely to paint an accurate picture of who has the disease, Dr. Henry said.

While Ontario does plan to focus on asymptomatic high-risk groups, the move to let anyone worried about COVID-19 exposure get a test, regardless of symptoms, is concerning to some experts. Janine McCready, an infectious diseases physician at Toronto’s Michael Garron Hospital, said people who test negative may believe they are in the clear, when in fact they may have taken a test too early.

“That test is just a snapshot in time,” Dr. McCready said. “They still could develop COVID tomorrow or the day after.”

That would likely be the case if anyone who went to Trinity Bellwoods this past weekend decided to get tested too early. It can take up to 14 days for people infected with COVID-19 to develop symptoms, meaning that a test done in the next few days is likely to be meaningless.

Ontario appears to be the only province that has made its asymptomatic COVID-19 testing criteria so broad. In Alberta, asymptomatic testing is now available, but only to close contacts of confirmed COVID-19 cases, as well as workers and residents at sites where there are outbreaks.

Starting this week, the Alberta is also offering a one-time test to all asymptomatic workers and residents at long-term care facilities, even if those homes have no reported cases or outbreaks. The province conducted some limited tests of residents in the hard-hit cities of Brooks and Calgary to determine how widely the disease was spreading among asymptomatic people.

While the results are not yet final, very few people who were not close contacts of confirmed cases or part of an existing outbreak tested positive, according to a provincial spokesperson. 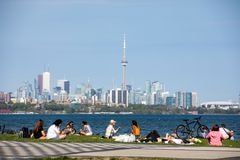