The Alameda County Sheriff’s Office showed The Globe and Mail still images Thursday of an altercation between Raptors president Masai Ujiri and a sheriff’s deputy to rebut witness accounts that the team executive did not strike an officer in the face after the Toronto team won the NBA championship in Oakland, Calif.

The sheriff’s office allowed a Globe and Mail reporter to view select arena security and body camera images of the altercation, when Mr. Ujiri attempted to enter the Oracle Arena court for the postgame trophy ceremony. But the office declined to allow The Globe to republish the images. It also declined to allow The Globe to view the full videos, saying it could interfere with the investigation into potential charges against Mr. Ujiri.

“[We wanted] to show that a crime did occur, when people are saying that ... there was no strike to the face, when in fact there was,” said spokesperson Sergeant Ray Kelly. “We’ve done it in a way that can still let the investigation take place without contaminating the witness pool.”

One of the images show both Mr. Ujiri and the deputy. Mr. Ujiri’s arms appear to be raised and outstretched. Both his hands appear clenched into fists, and he appears to be striking the officer’s face. Investigators allege that Mr. Ujiri struck the deputy’s jaw and shoulder.

Joy, pain and basketball: I love the Warriors, but my country loves the Raptors

The sheriff’s office declined to identify the officer, saying that the department has received threats from angry fans. The deputy suffered a concussion and is considering whether to sue Mr. Ujiri and the Raptors, his lawyer told The Globe.

The Oakland Police Department is investigating the incident and is expected to file its report with the District Attorney’s office soon. Alameda County Sheriff Greg Ahern has recommended Mr. Ujiri be charged with misdemeanour battery of an officer, punishable by up to 364 days in jail.

The Sheriff’s office said that Mr. Ujiri flashed an NBA-issued badge backward, as he was attempting to push past the officer. When the officer pushed him back and asked for credentials, Mr. Ujiri identified himself as the president of the Raptors. But investigators said Mr. Ujiri did not have the purple badge and yellow armband required to access the court.

The Sheriff’s office showed a reporter images taken from the officer’s body camera shortly before the confrontation showing Mr. Ujiri with no credentials in his hands or around his neck. Mr. Ujiri can be seen on separate fan videos shared to social media holding a red badge.

The NBA-issued badge identified Mr. Ujiri as a member of the team and included his name, photo and what areas of the arena he could access, according to generic copies of the badge shown by the Sheriff’s office.

Investigators said similar badges were given to hundreds of team executives, media and arena staff. But there were only 136 purple badges issued to access the on-court celebrations.

A body camera strapped to the officer’s chest captured the altercation, but shut off shortly after it ended, Sgt. Kelly said. Responding to criticism that the officer may have turned off the camera himself, Sgt. Kelly said investigators believe a power-off button on the top of the camera was hit accidentally during a scuffle between the officer and a member of the Raptors entourage who jumped in to break up the altercation.

The Raptors declined to comment on the still images shown to The Globe.

On Thursday, The Globe spoke with a fourth witness who was sitting about 10 rows back from the courtside.

The physician from British Columbia, who The Globe granted anonymity to allow him to speak freely given his profession, said security on the court was increased after the final buzzer as fans began to rush from their seats.

The man said the deputy was occupied with another person when Mr. Ujiri attempted to move past him, holding a badge. Then the deputy turned toward Mr. Ujiri and attempted to block him in what the witness described as an aggressive manner. He said he saw the deputy and Mr. Ujiri exchange shoves in the chest area, but did not see the Raptors president strike the deputy’s face.

Neither did the other three witnesses who spoke to The Globe. Two of them also said the officer appeared angry but uninjured, and all witnesses said he remained at his post for at least 10 minutes following the interaction.

Editor’s note: An earlier version of this article incorrectly said a body camera strapped to the officer’s chest captured the entire altercation, but it did not in fact capture the alleged strike to the deputy’s jaw and shoulder due to the camera’s vantage point before it shut off. 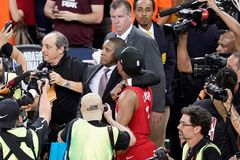 Follow Tamsin McMahon,  on Twitter @tamsinrm
Report an error Editorial code of conduct
Due to technical reasons, we have temporarily removed commenting from our articles. We hope to have this fixed soon. Thank you for your patience. If you are looking to give feedback on our new site, please send it along to feedback@globeandmail.com. If you want to write a letter to the editor, please forward to letters@globeandmail.com.
Comments