Police west of Toronto have announced new drug-related charges in a collision that left a mother and her three children dead, after an alleged speeding driver crashed into her SUV.

Peel Regional Police have said 20-year-old Brady Robertson of Caledon, Ont., was driving at “a very high rate of speed” before colliding with the family’s SUV and another vehicle on June 18.

“As a result of the ongoing investigation on Tuesday, Sept. 8, 2020, four additional charges of impaired operation causing death by drugs were laid,” read a police statement.

Investigators said Robertson was scheduled to appear in court on Friday.

A probe into the incident by the province’s police watchdog is ongoing. The Special Investigations Unit said it invoked its mandate because a police officer had “observed” the speeding vehicle a short time before the crash.

Ciasullo was an elementary school teacher with the Dufferin Peel Catholic District School Board, and relatives have described her family as “beautiful souls.”

An online fundraiser had raised more than $426,000 for Ciasullo’s family as of Friday afternoon.

Mother and three daughters laid to rest as charges brought in fatal crash in Brampton
June 26, 2020 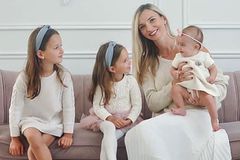