The homepage for Michael’s fundraiser is a study in how to break hearts.

At the top is an image of a smiling baby boy with bright blue eyes. Below is a description of the Cure SPG50 campaign with a knee-buckling first line: “I’m Terry, Michael’s dad, and my son is withering away right in front of me.”

Born on Dec. 17, 2017, Michael Pirovolakis was diagnosed with a rare and slow-progressing neurodegenerative disease, SPG50, that moves from the toes to the brain as a person moves through childhood. A neurologist told the Toronto family that Michael would lose function in his legs by the age of 10, followed by his arms and, eventually, his brain.

But there was hope.

Researchers believe an experimental gene therapy could cure SPG50, but the disease is so rare – just 60 cases diagnosed in the world – that no drug company would put up the money necessary for research and clinical trials. About $3-million was needed to complete that work and, potentially, treat Michael and dozens of children in other countries.

When Michael’s father, Terry, learned this, he decided he would simply raise the cash himself.

Earlier this year, he made his pitch public on GoFundMe, the online fundraising platform, unsure of what to expect.

“We didn’t think anyone but friends and families would help us,” Mr. Pirovolakis said.

In mid-December, GoFundMe declared his “"Cure Michael” campaign its top-grossing Canadian fundraiser of the year at $995,379. The website’s list of top fundraising campaigns for the year offers a glimpse at trends in Canadian generosity.

Last year, the Humboldt bus crash topped the list with a record-breaking $15-million raised for affected families. But rounding out the list were three legal defence funds related to two contentious court cases: one for Vice-Admiral Mark Norman, the naval officer who faced a charge of breach of trust before the Crown abandoned the case last May ($243,875 raised); another for Gerald Stanley, the Saskatchewan farmer who was acquitted of second-degree murder in the shooting death of a 22-year-old Cree man who drove onto his property ($223,327 raised); and one for the family of Colten Boushie, the man Mr. Stanley shot ($204,048 raised).

This year, no politically charged legal funds cracked the top 10 list. Canadians on GoFundMe directed their donations more toward children in desperate need of expensive medical treatments. In addition to the Cure Michael campaign, there were two separate fundraisers on the list for children needing a $2.8-million treatment for spinal muscular atrophy (total of $1,007,641 raised) and one for a girl requiring an experimental bone marrow transplant ($473,044).

For the Cure Michael campaign alone, more than 7,000 donations come in from all over the world and at all hours of the day and night. While many of the donations are anonymous, GoFundMe figures show British Columbians are the biggest donors to the site, with Kamloops, Chilliwack, Kelowna, Nanaimo and Victoria holding down the top-five spots on the list of most generous Canadian cities.

“This story really resonated,” Mr. Pirovolakis said. “People hear our story and realize these kids can be cured and think, ‘We can’t let this happen.’”

A Globe and Mail story on the Cure Michael campaign, published in July, helped bring in $120,000 in a single day, he said.

“I woke up the morning that story came out and I was amazed,” he said. “We had 800 donations between the time the story went live, at 4 a.m., and the time I checked the page around 9 a.m.”

The family has also remortgaged their house and cashed in their retirement savings.

Despite those donations, the campaign is only one-third of the way toward funding the complex work needed to come up with a cure in partnership with U.S. researchers.

SPG50, or Spastic Paraplegia 50, is a disorder in the gene AP4M1. The proposed therapy would use the AAV virus to deliver working DNA to Michael’s cells that would turn on the missing gene.

This month in Boston, researchers are testing the virus on Michael’s skin cells. In about four months, mice will be injected with the drug and closely observed.

“Basically, the next 18 months is about safety testing the drug,” Mr. Pirovolakis said.

Assuming all tests go well, the campaign will need $1.2-million to create enough of the drug for up to 20 children. A further $1-million will be used to form a company to submit the drug for U.S. Food and Drug Administration testing and clinical testing.

In trials, the drug would be injected into the spinal column. “According to the plan, one injection would work for life,” Mr. Pirovolakis said. “It’s crazy stuff.”

To treat their baby’s rare disorder, the only case of its kind in Canada, a family risks all for a gene-therapy breakthrough
July 10, 2019 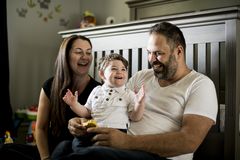