It’s a good thing February is the shortest month. Canadians probably couldn’t bear another brutal day of it.

Piercing cold, ferocious winds, treacherous ice and snow piled into Himalayan peaks on front lawns: This was a picture of Canada in February, as a vast country became united in a coast-to-coast cocktail of meteorological misery. As March sets in, so is winter weariness.

“February cursed us,” said David Phillips, senior climatologist for Environment Canada. “Even fans of winter have to say that February was too much. Either too much snow, too much cold, it just went on, there was no break. Nature did not take a breather in February.”

Canadians experienced the “too much” of February in their own distinct ways, evoking what Leo Tolstoy said about families: Happy families are all alike; each unhappy family is unhappy in its own way.

Victoria got record snowfalls, Saskatoon saw wind chills of -50 C, and Montreal got smothered in ice.

Mr. Phillips, who likens himself to the country’s “national psychologist,” has observed that Canadians feel better about the weather when they look afield. “If Canadians know it’s worse somewhere else, they don’t feel so bad.”

In that vein, they can look at Sudbury. It’s been swamped by 334 centimetres of snow this season, 70 per cent more than average.

“It essentially looks like the Arctic here,” said Dillan Ruthenberg, president of Maximum Lawn Care and Snow Removal, whose crews have been grabbing sleep between 12-hour shifts of snow removal. February saw 100 cm of snow alone.

“There are extremely high banks everywhere. People are getting stuck on side roads, and there are ruts from where the tires are. It’s absolutely awful.” His company is deluged by calls from frantic homeowners who can no longer shovel themselves out.

“People are saying they have nowhere to put the snow,” Mr. Ruthenberg said.

Then there’s Saskatoon: The city’s average temperature in February was -24 C, and several days it was so cold that buses were cancelled and Environment Canada issued frostbite warnings. Wind chills frequently dropped to the -40 C range.

One meteorologist tweeted Wednesday with some good news: “This was Saskatoon’s warmest morning of the month with a low temp of -18, feeling like a balmy -29 with wind chill!”

One of the coldest spots in Saskatchewan was the community of Val Marie near the Montana border, where the temperature dipped in February to -45 C.

“It was damn cold,” Mayor Roland Facette said from inside his Dodge pickup on his cattle farm on Thursday. The 77-year-old said it was even hard on his cattle, which were out all day. A few people in Val Marie complained, but he’s being upbeat.

Victoria, which likes to remind freezing Canadians that it has the mildest climate in Canada, got an Arctic blast that delivered the second-coldest February on record. The city’s 68 cm of snow last month was 10 times the normal volume and the most since officials began tracking data in 1941.

Mr. Phillips joked that it was retribution for the city’s annual “Flower Count” in early March, when Victoria promotes its blooms and blossoms.

While February saw snowstorms in Vancouver and Victoria, Edmontonians had four days when it was -30 C or lower, and Calgary had its coldest February since 1936.

Canadians like to tease Torontonians for being weather wimps, but residents of Canada’s largest city may have whining rights this year. The city has had only nine dry days since Jan. 1, Mr. Phillips said. Something has fallen from the sky every other day, including 130 cm of snow, 50 per cent more than normal.

How to train properly to avoid snow-shovelling problems

Fed up with this never-ending winter? Book a sunny family getaway now

It’s not the weather that’s cold – it’s us

As for Montreal, winter has felt like a relentless cycle of snow, rain, slush and frozen precipitation. Several sidewalks are coated with enough ice to sustain a decent game of shinny, and stores have seen a run on crampons.

The Urgences-santé ambulance service has had 800 calls for falls, with injuries ranging from wrist and ankle sprains to concussions. “On some surfaces, like parking lots, we’re talking about sheer ice,” said Valérie Tremblay, a spokeswoman for the service. “Even the salt and abrasives can’t handle it.”

Montreal saw nine days of thaws and freezing in February, according to Mr. Phillips, meaning that whatever was liquid on the ground during the day turned to ice overnight.

“It was maple-syrup weather – above freezing during the day, below freezing at night,” Mr. Phillips said. “What nature melted, it also froze.”

To experience schadenfreude, he suggested looking at the nation’s capital. Ottawa got 263 cm of snow this season, 56 per cent more than usual. The city has also been through numerous thaw-and-freeze cycles. Residents are posting pictures on social media of cars entombed in frozen slush and kids practising their hockey moves on the street – in skates. Stores are running low on abrasives.

“If I was giving a gold medal to misery, I think it would probably be Ottawa,” Mr. Phillips said.

“Arctic air masses keep invading the south,” he said. “The jet stream is dipping south. It allowed colder air from the North Pole to come in.”

The impact has spread across the country: ski resorts in Ontario and Quebec dealing with high winds, storms closing schools in Atlantic Canada, and Quebec’s Gaspé getting swallowed under 450 cm of snow.

“No one has really been left out of this misery,” Mr. Phillips said. “February will go down in Canadian history from coast-to-coast-to-coast as one of the most difficult months. It has been truly Canadian.”​ 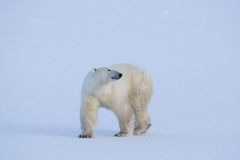 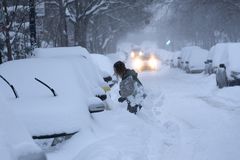 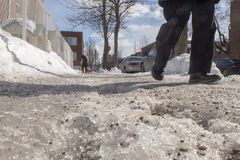