On a typical summer afternoon, the main activity on the island of Miscou, at the tip of New Brunswick’s Acadian Peninsula, consists of tourists flocking to La Terrasse à Steve, a local landmark, to fill up on lobster sandwiches and skewers of barbecued shrimp and scallops.

But nearby on the 10-kilometre-long island, another feeding frenzy has a more troubled history.

For three weeks every summer, Miscou Island plays host to migrating shorebirds called whimbrels that fly in from the Arctic and feast on the region’s bounty of wild berries before undertaking an extraordinary non-stop journey across 6,000 kilometres of open ocean.

The Maritime sojourn is crucial for the whimbrel, a protected species thought to be in serious decline. But it has also placed whimbrels in direct conflict with the island’s blueberry producers, a growing presence in the region who, until recently, viewed the brown, speckled birds as a threat to their bottom line. 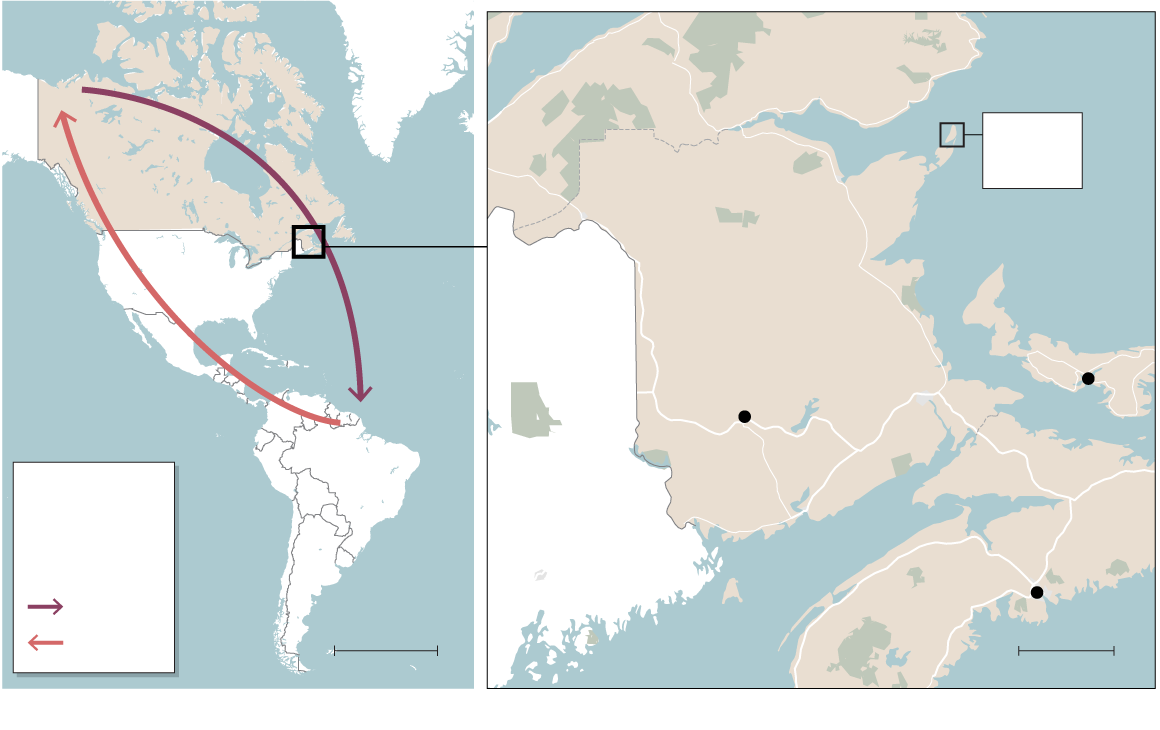 Now, a concerted effort by scientists to engage with producers on behalf of the whimbrels appears to be paying off. Producers have not only become more tolerant of whimbrels in their fields, but, for the first time, they have participated in counting the birds to help track their fluctuating numbers.

“This year we had producers calling and telling us, ‘Hey they’ve arrived!’ I wasn’t expecting that,” said Lisa Fauteux, a biologist with the conservation group Verts Rivages, based in Shippagan.

Ms. Fauteux said the success of the outreach effort could pave the way for a broader awareness of conservation issues across the Acadian region.

It’s a dramatic turnaround compared to 2014, when frustrated producers were looking for ways to deal with the whimbrels turning up in their blueberry fields. Reports from local birders of whimbrels being harassed and shot reached Julie Paquet, a Sackville-based shorebird biologist with the Canadian Wildlife Service. Ms. Paquet began enlisting colleagues to investigate the problem. But when her team of mainly female researchers arrived and began asking questions, producers were more than a little wary of the “strange women hanging out in their blueberry fields,” she said.

“The growers, in the first year, were not happy to see us,” said Diana Hamilton, a field ecologist with Mount Allison University who participated in the project. “They considered the birds a nuisance.”

Ms. Paquet decided on a two-pronged approach that involved surveying producers to understand their concerns while gathering data on the whimbrels to quantify their impact. From the survey, there was no questionproducers regarded the migrating birds as a serious problem. But when scientists began documenting the whimbrels' feeding habits, they discovered that impression was incorrect.

Whimbrels are omnivores who use their long curving beaks to hunt for crabs, insects and other small invertebrates living along the shore. During migration, they supplement this diet with berries, which grow naturally in bogs near the coast. As commercial blueberry growing has expanded on the peninsula, whimbrels have helped themselves to the new food source.

But researchers found that blueberries only account for half of what the birds eat when they are in the region, and producers were significantly overestimating the quantity of berries the birds can consume. The real quantity and cost turned out to be minimal compared with money spent on noisemakers and other means of chasing the birds away.

The challenge of conveying these data and winning over producers fell to Julie Guillemot, a professor of environmental management at the University of Moncton’s Shippagan campus. With a background in conflict resolution, she began an outreach program to inform growers – a program that Ms. Fauteux has since continued under contract with the federal government.

“What we’re doing is myth-busting,” Ms. Fauteux said. “We are telling them the story of the whimbrel.”

It’s a story that spans half the globe, from the Mackenzie River Delta where whimbrels nest each summer to their wintering grounds in South America. Based on historic accounts, biologists estimate the number of birds making the trip once numbered in the hundreds of thousands. Current estimates suggest about 22,000 now pass through Atlantic Canada annually. While fewer than 10 per cent of them will stop on the Acadian Peninsula, it’s enough to make the region critically important to the long-term survival of the species.

John Schenkels, chair of Bleuets NB Blueberries, which represents producers in the province, said biologists made a convincing case that whimbrels are not a problem for the industry when they spoke at one of the organization’s meetings last year.

“I would say that most producers that heard the message were somewhat relieved," he said.

Lane Stewart, a producer with a 200-acre blueberry farm on Miscou Island, said the outreach effort has helped to change his mind about the whimbrel, a bird he said was commonly hunted on the island in his grandparents’ day.

“They are not a threat to me,” said Mr. Stewart, who was among the producers who allowed biologists onto his property in 2016 to trap individual birds temporarily and outfit them with GPS transmitters.

Satellite tracking of the transmitters confirms that after leaving New Brunswick, the birds typically fly non-stop for about six days in order to reach the northern coast of Brazil. No other shorebirds in the Western Atlantic are known to routinely undertake such a long flight over open water, a behaviour biologists suspect may have arisen so the whimbrels can skirt past the hurricane-prone Caribbean.

“They may actually be flying a longer distance to avoid storm encounters,” said Fletcher Smith, a biologist at the College of William & Mary in Virginia who led the tracking operation. “It’s really an amazing thing.”

Mr. Stewart said he has taken to following the birds' progress on a website that shows where they have travelled.

“To see such a little bird crossing from one end of the planet to the other – it’s kind of impressive,” Mr. Stewart said. "If it’s a help for them to eat here, that’s okay.”

It appears the whimbrels need all the help they can get. While biologists counted 1,200 whimbrels on the Acadian Peninsula in 2014, Ms. Fauteux said the number this year is closer to 400. But it is not clear how much of this represents a population decline and how much can be chalked up to shifting migration routes. Either way, scientists need more data, and Ms. Fauteux sees an opportunity to keep growers engaged by involving them in monitoring the birds. She said the project requires persistent communication with individual growers and with the community as a whole.

Even now, there are wrinkles that can make the dialogue challenging. While whimbrels may not be the scourge producers once thought they were, they must also contend with gulls, a resident species that requires no protection and likely does far more damage. That raises the question of how to keep the gulls off the blueberry fields without also chasing away the more skittish whimbrels.

Local politics also comes into play in places where residents are opposed to the expansion of blueberry fields into natural habitat. Ms. Fauteux said the need to enlist producer support on behalf of the whimbrels has sometimes meant striking a delicate balance between strongly-held opinions on land use.

“We’re trying to create a different viewpoint to broaden [the producers’] sense of working with nature,” she said. “But we have to respect that they have permits to have these fields.”

Having started the ball rolling four years ago, Ms. Paquet said the gradual shift in attitude toward whimbrels can blossom into something richer as producers continue to weigh the evidence scientists have provided.

“People need time,” she said. “My hope would be that communities on the peninsula take pride in the fact that they are providing habitat and resources for this really quite amazing species.”

Ms. Fauteux, who has roots in the area, said that is exactly what she has in mind, as she spends her summer crisscrossing the peninsula to meet with producers wherever she can reach them.

“Face-to-face goes a long way,” she said. “Once you can get your foot in the door, it’s always better.”

Editor’s note: An earlier version of this story stated that no other shorebirds are known to fly farther over open water than whimbrels. While this statement is accurate for the Western Atlantic, The Bar-tailed Godwit flies even farther over Pacific waters.