The path to victory in the October federal election lies in the suburban stretches outside of Toronto, a fast-growing and culturally diverse region of 30 or so ridings that make or break governments.

The 905, known for its area code, is a vast geographical area, where strip malls and homogeneous homes mingle with mansions, mosques, farmers’ fields and cricket stadiums, where driving long distances is a daily reality, towns are expanding and real-estate prices are rising.

And it’s where elections are won and lost. People in the ridings, from Burlington in the southwest to Brampton in the northwest to Whitby in the east to Newmarket in the north, tend to vote in a block and swing between parties. The seats are among the most electorally important in the country and, so far during this campaign, many voters say they are feeling unsure.

ONTARIO AND THE GTA

ONTARIO AND THE GTA 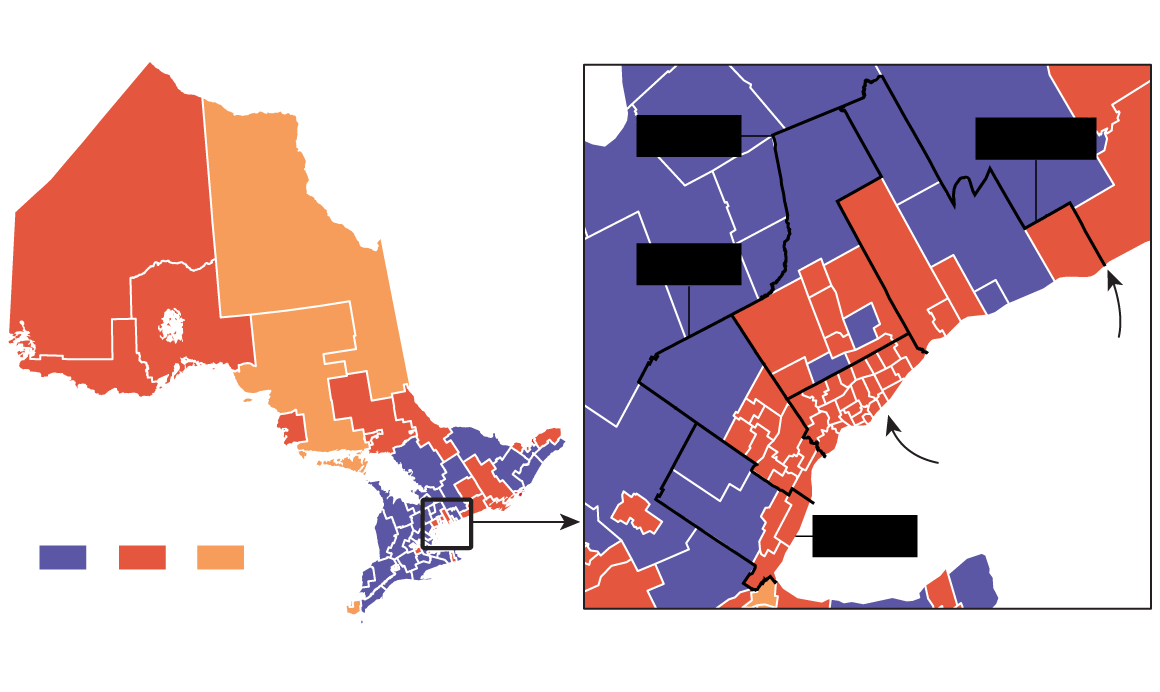 The 905 was key to Stephen Harper’s majority victory in 2011, and Justin Trudeau’s in 2015, when the Liberals won all but a handful of seats in the region. In fact, in every election but one since Pierre Trudeau became prime minister, the suburban ridings surrounding Toronto have voted for the party that formed government.

The ridings are seen as the quintessential target for “middle-class" issues, with parties pitching messages about affordability tailor-made to the region, said Nik Nanos, who leads the team that conducts daily tracking polls for The Globe and Mail and CTV.

The Liberals’ success in the 905 in 2015 was “one of their key foundational pieces to forming a majority government," Mr. Nanos said. Fast forward to the second week of the campaign, “That advantage has been basically eliminated, where the 905 is much more competitive between them and the Conservatives.”

“The 905 belt is in play and is the one most likely to swing, and the most vulnerable to vote splits,” he said.

Both the Liberal and Conservative leaders face unique challenges in this election.

For Mr. Trudeau, it’s a series of broken promises and controversies, including the SNC-Lavalin affair and recent revelations that he wore brownface and blackface at least three times, as recently as 2001. For Conservative Leader Andrew Scheer, it’s a lack of profile and the Liberals’ constant comparison to cuts undertaken by Ontario’s Progressive Conservative Premier Doug Ford, a strategy that appears to be taking hold at the doorsteps. At Mr. Scheer’s campaign event in Whitby on Monday, parents showed up to protest the Ford government’s changes to the autism program. For his part, Mr. Scheer has taken to attacking former Liberal premier Kathleen Wynne’s economic record in Ontario when asked about Mr. Ford.

Mr. Scheer is expected to get some help this week: Alberta Premier Jason Kenney is planning to spend the weekend in North Toronto and the city’s suburbs, embarking on a whistle-stop tour, although likely without the federal Conservative Leader, who campaigned in Toronto and the 905 on Monday. As immigration minister in the former Harper government for five years, Mr. Kenney worked to convince immigrant voters that the federal Conservative Party best reflected their values.

“Confusing,” said Jan Larkin, 64, as she stood in the parking lot of a small grocery store in Milton, a sprawling suburb northwest of Toronto. The riding is currently held by Conservative Lisa Raitt, one of the only Tories who survived the red wave that swept the 905 in the past election.

Ms. Larkin said she has traditionally voted for Ms. Raitt, but she’s eyeing Liberal Adam van Koeverden, the 37-year-old former Olympic kayaker, who is running for the first time. The problem, Ms. Larkin says, is the leadership of both parties.

“Trudeau – a lot of people might have swept the SNC-Lavalin scandal under the carpet, but I’m not one of them. And his ethics really concern me. I haven’t made up my mind,” Ms. Larkin said.

And what does she think of Mr. Scheer? “Boring. And I can’t help but stop and pause about the Doug Ford-Andrew Scheer connection … Personally I think Ford might have some undue influence on the man. Perception is reality.”

The former IT professional, who lost her job a few years ago, said she cares about both low taxes as well as the environment. She said Mr. Trudeau’s blackface incidents will affect her vote as well. She was “disgusted." She said it wasn’t the act itself that disturbed her – because she says young people do stupid things – but what she saw as “a lack of sincerity” in his apology. “To me, he’s arrogant,” she said.

Still, she views her choice as a two-way race, ruling out the NDP and Greens – and adding she does not support the People’s Party of Canada. “I’m not going to waste a vote on a party that really doesn’t have a chance to get in there and make a difference."

The Conservatives have focused their campaign on affordability, a pledge with particular resonance in the Greater Toronto Area. Along with a “universal tax cut," they’ve promised to remove GST from home heating, review the mortgage stress test for first-time homebuyers and cancel the carbon tax. The Liberals have also proposed a series of pocketbook measures, from making the first $15,000 of income tax-free, interest-free loans of up to $40,000 to make homes more energy efficient, as well as measures to tackle gun violence – all while promising to protect the environment, which is a top issue for voters.

Milton is one of the only suburban seats the Conservatives held onto in the past federal election, with Ms. Raitt winning by less than 2,500 votes. The city’s population, now around 125,000 people, is fast-changing, diverse and getting younger, having grown 30 per cent between 2011 and 2016, according to the census.

The recruitment of Mr. van Koeverden, who originally hails from nearby Oakville and now lives in Milton, means the Liberals view the seat as competitive, even in the face of a well-known incumbent. “I don’t like doing things half-assed and I don’t like easy things," Mr. van Koeverden, who has won four Olympic medals at four games, said. “I was very comfortable asking myself ‘Why not me?’ when I was an athlete.”

Mr. van Koeverden and his gaggle of volunteers have been knocking on doors since October. Jogging up the front steps of a tidy house in a subdivision in Milton’s south end, Mr. van Koeverden, sporting his official Olympic jacket, hands over a flyer and introduces himself.

The man at the door, a father of twin sons in high school, shakes his hand. He tells Mr. van Koeverden, unprompted: “I have support for you. I don’t like Doug Ford."

“So many people have problems with health care and education," he adds.

The sentiment is echoed in other 905 ridings. Outside of an entertainment plaza in Mississauga, Nadeem Chaudry, 56, a security guard who hails from Pakistan, said he, too, worries about the Ford government’s handling of the education file, with the province potentially losing thousands of teachers owing to larger class sizes and heated negotiations between teachers’ unions and the Ford government under way. “That’s the reason I’m still with the Liberals, in spite of all these scandals," the father of three said. “I cannot afford a government like Ford.” He said he personally wasn’t affronted by Mr. Trudeau’s racist makeup, and is still planning to vote Liberal.

Sandra Jones, 57, of Mississauga, said the Conservatives’ promise to tackle the country’s deficit is important.

“The only one I see that is going to do anything is Scheer,” she said.

Heading into her fourth campaign, Ms. Raitt said the constant referencing of Mr. Ford during the campaign means people are talking about him, but it’s not nearly as negative at the doors as it was in 2015, when Mr. Harper was still leader of her party. She believes those bringing up Mr. Ford likely wouldn’t vote Conservative anyway and said more people are making up their minds. “They are fed up,” she said. “I’m getting more and more people shaking their heads, and saying we’ve got to get rid of this guy [Trudeau].”

As for Mr. van Koeverden, she said, “He has to tell everybody he’s a gold medal Olympian … and people know who I am.”

A recent Nanos poll, albeit with a small sample size, put the Liberals and Conservatives neck-and-neck in the 905 – with support falling for Mr. Trudeau’s party in the second week of the campaign. The poll was sponsored by The Globe and Mail and CTV. Mr. Nanos, who is tracking races throughout the campaign, says Milton is one of the closest in the GTA. Others include the north Toronto areas of Markham-Unionville and King-Vaughan, currently held by the Liberals, as well as Whitby, the riding once held by late finance minister Jim Flaherty and where former Liberal-turned-independent Celina Caesar-Chavannes is no longer running.

In Brampton North, 29-year-old Conservative candidate Arpan Khanna, a former adviser to Mr. Kenney, is looking to defeat Liberal Ruby Sahota, first elected in 2015. The Alberta Premier attended one of Mr. Khanna’s fundraisers in the spring, as well as another in Mississauga, and three of Mr. Kenney’s ministers have also travelled to British Columbia, Quebec and Ontario to campaign for the federal Conservatives.

"He does resonate well in this area,” Mr. Khanna, the son of immigrants from Punjab, said of Mr. Kenney. The Liberals won all five seats in the Brampton area in the past election, where a majority of residents are visible minorities, primarily of South Asian descent. The NDP is also targeting four seats in Brampton, an area where Leader Jagmeet Singh was a provincial representative before running federally.

Federal Conservatives believe they can win back many ridings they lost in 2015, including in Vaughan, where Mr. Scheer held his first Ontario rally in early September.

Attending the rally with her husband and infant son, Nancy Nasser el Ddine, 30, said low taxes are the most important issue to her young family, who reside in Woodbridge. She said her family sold its truck because gas prices had gone too high.

“The carbon tax is huge for me. That’s like a deal breaker," she said. “I think that the environment is really important. I don’t think that’s the most effective way to tackle [climate change].”

Other voters are looking to new alternatives. Rene Harris, 38, a customer-service agent who recently moved to Milton with his young family, considers himself a Liberal. But he said he is growing increasingly disillusioned with promises that are intended to make life easier for the middle class, with no direct impact on his life. Still, he said he doesn’t trust the Conservatives to lower taxes without sacrifices.

“It might be the best thing for us to give a different party an opportunity, like the Green Party. Because [global warming] is an actual issue that is happening, not just here, but around the world,” he said.

“All the empty promises that we’ve received over the years, I don’t know what we could do any more, except to go a different route.”

“You’re the wrong person to come right now, man,” said Chris Louro, 42. “It’s nothing toward you. Your leader needs to go.”

Mr. Louro, who works in the oil industry, said Mr. Trudeau has done “a lousy job” over the past four years. “He’s made our country look like a bunch of fools,” he said.

He’ll be voting Conservative, he later says, but he doesn’t think the party will form government. “I don’t think Andrew Scheer’s got of enough of Ontario to win the election,” he said.

If anything, he hopes Mr. Trudeau wins a Liberal minority.

“That way he doesn’t have complete control,” he said. “At least he’ll have to fight.”