Before COVID-19 the Hamilton Amateur Astronomers club would hold open nights where the group members would set up their telescopes and let the public look into the night sky. They would often be asked, “What’s so special about tonight?”

Mr. Gauvreau waited at the gates of the Binbrook Conservation Area in Binbrook, Ont., for the other members of the club. This night’s group, consisting of a half-dozen members, was meeting to take in the main, but not the only, attraction, Comet NEOWISE. The group has an arrangement that grants it access to the park after closing. To fully appreciate objects in the night sky, one must be away from cities and light pollution. Binbrook is the perfect place, far enough away from Hamilton and easily accessible from the Golden Horseshoe area. The last time a comet was this easily visible was Hale-Bopp in 1997.

”Comets come along more frequently than people think. They are usually dim, telescopic objects. If we are lucky, they look half decent [through] a pair of binoculars. It’s been over 20 years since we’ve had one this good, so we are enthusiastic,” Mr. Gauvreau said.

The group decided that a small hill above Lake Niapenco would provide the best vantage point. The caravan of vehicles made its way to a picturesque spot overlooking the lake where the members parked their cars and hurried to set up their equipment before the last of the evening sun dipped below the horizon, and NEOWISE would appear. Out of hard-plastic cases came reflecting telescopes, refracting telescopes, cameras, tripods, tables and chairs.

Before NEOWISE was visible to the naked eye, it was captured on Matthew Mannering’s camera. The group was excited and rushed to look at the screen on the back of the camera. Using Mr. Mannering’s photo, the members repositioned their cameras and telescopes to get a look at NEOWISE. Once they had located the comet, they began to photograph it.

One of the other members, Denise White, didn’t have a camera. Her gear consisted of a small notebook with handwritten star charts and notes she uses as a road map for her Dobsonian reflecting telescope. Her telescope is different than those belonging to her friends. Theirs use a computer and motors to assist in finding the small particles of light in the night sky by inputting coordinates and having the computer do the work. However, if she wants to see something, she has to find it by physically moving the telescope and using a small red bullseye to align the stars or planets she wants to see. It’s a difficult task that doesn’t always yield good results.

Ms. White was on the hunt for deep-space objects called Messier objects, named after the French astronomer, Charles Messier, who catalogued them. “I found three of the six things I was looking for tonight,” she said. She was searching for globular clusters, groups of stars tightly bound by gravity.

“Astronomy can be a lonely thing when doing it alone, but when you can share your findings with other people, it makes it a special experience,” she said.

Mr. Gauvreau was on his fourth viewing of NEOWISE. This was his first to take place in the evening. The others all took place around 3 a.m. on the Niagara Escarpment high above Hamilton.

”It’s just us and the stars and the rest of the universe,” he said. “It takes you out of your daily life and your daily troubles and takes you to a place of wonder and awe and calm. It’s what keeps us coming out time and time again.” 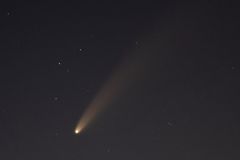