After a quarter-century of Canada’s longest boil-water advisory, the people of Neskantaga thought their water crisis could not possibly get worse.

The breakdown of two electric pumps has left the isolated First Nations community without any water in some of its homes this week, and only a trickle of unchlorinated water in others. Its school has shut down, and nearly 100 people were flown to Thunder Bay on emergency evacuation flights on Sunday, with more evacuations scheduled for Monday evening.

Some residents are already reporting headaches and skin infections from the water, according to Chief Chris Moonias.

The federal Liberals have pledged to eliminate all of the 56 remaining boil-water advisories in First Nations communities across Canada by March, 2021. But the prolonged crisis at Neskantaga and other First Nations has raised doubts about whether or not that promise will be met.

In a media briefing on Monday, officials from the federal Indigenous Services department suggested the Neskantaga residents could take sponge baths with boiled water for hygiene. They said they expect a replacement pump to be installed by Wednesday to fix the problem. The evacuation flights were an unapproved “self-evacuation” by the community, they said. 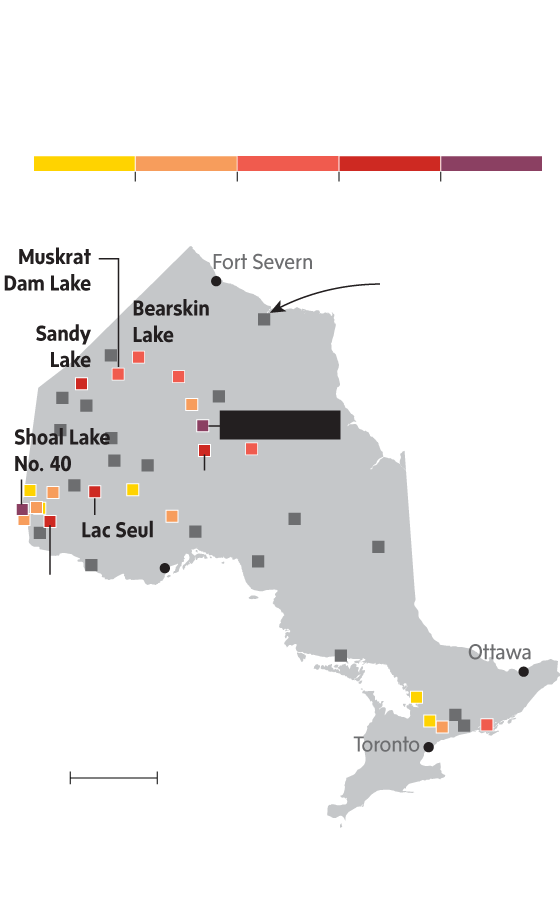 Years since the date advisory was set, 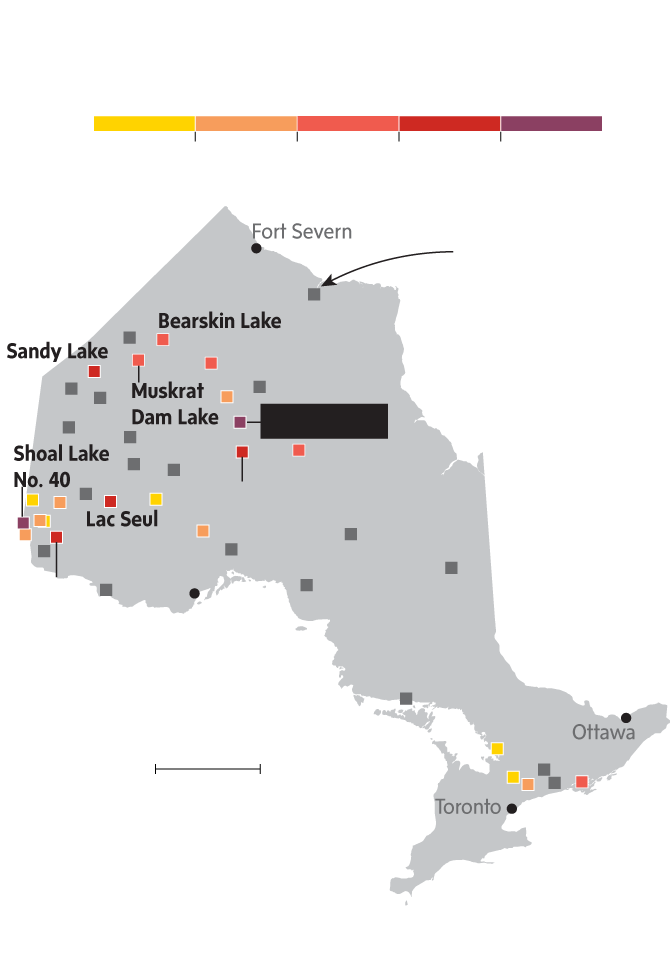 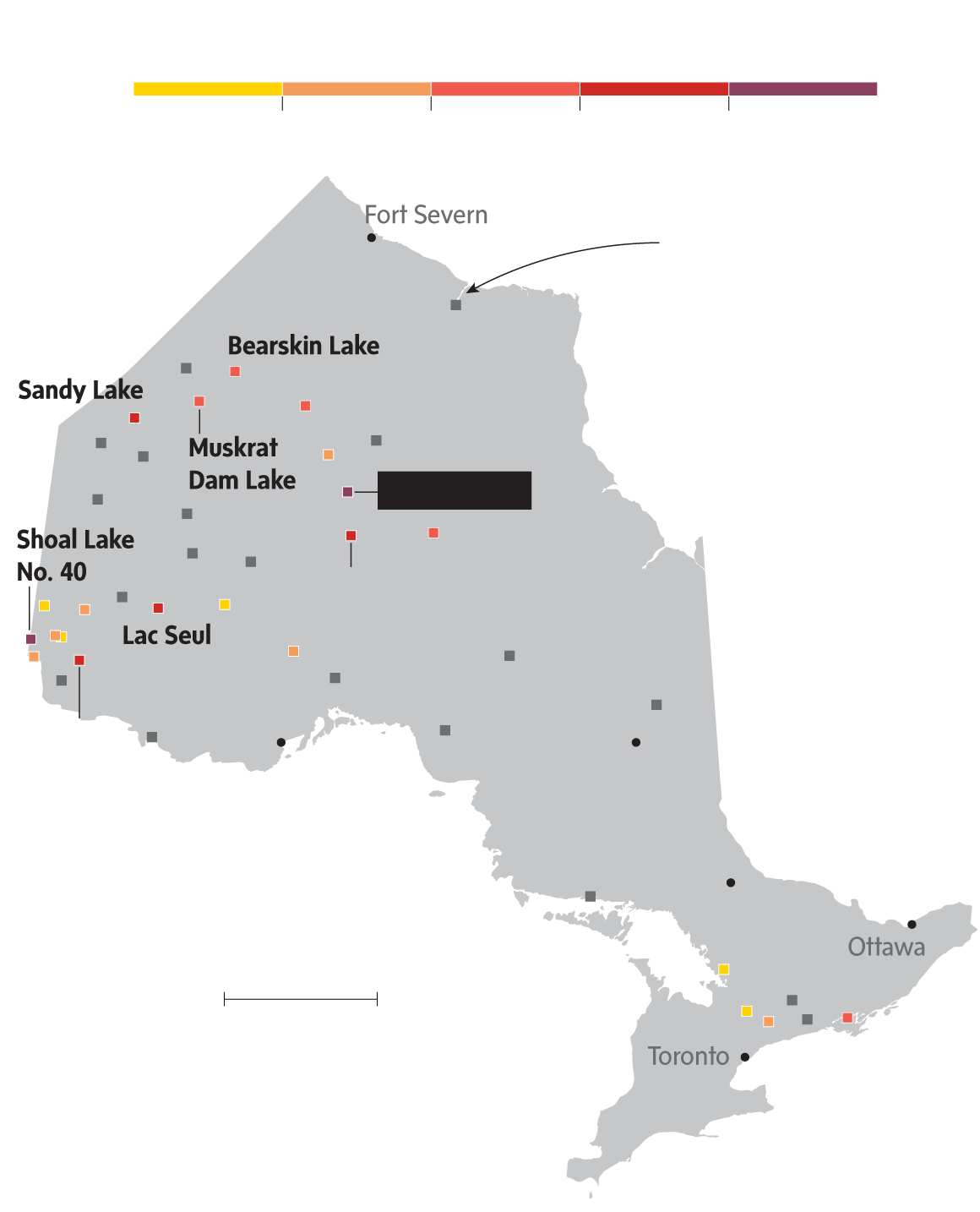 Neskantaga, on the shores of Attawapiskat Lake about 450 kilometres north of Thunder Bay, has gone nearly 25 years without safe water in its taps – longer than any other community in Canada. It has become a lingering symbol of a crisis that still haunts more than 55 Indigenous communities across the country.

“This water supply is UNSAFE,” warn the printed notices in Neskantaga, some of them so old that they are peeling and faded. “Any water that is going to touch your mouth must have been boiled.”

Despite the health warnings, people are still getting sick from the tap water. The latest to become ill this summer were a powwow drummer and a visiting canoe paddler.

Last month, the local water plant operator, Wilfred Sakanee, climbed into his truck to distribute a stack of new warnings. He had printed 80 of them – one for every house and office in this community – in an effort to prevent more illnesses.

The Indigenous Services department has pledged that a new water treatment plant will be opened in Neskantaga by mid-October, providing safe water in the taps of its homes for the first time in a quarter-century. But among many residents here, there is understandable skepticism about the promise.

The new plant was first scheduled to open in the spring of 2018. The opening was postponed. Then it was due to open in March this year, and again it was delayed. (Among the reasons: a dispute between the construction contractor and the First Nation.)

“Although this project was delayed, we are now on track,” said a statement this summer by Liberal MP Bob Nault, whose riding includes Neskantaga. He called it “a historic turning point” for the residents of Neskantaga. “It’s about time and long overdue. … Canadians would find it intolerable not to have clean and safe drinking water – they simply wouldn’t tolerate it.”

In budgets over the past three years, the government has announced more than $2.5-billion in long-term funds for its plan to eliminate all long-term boil-water advisories at First Nations by March, 2021.

But in Neskantaga, where $8.8-million in federal money has been allocated for the new treatment plant, will the water be drinkable by October as promised? “Nope,” Mr. Sakanee predicts. “They will have to do more testing. I probably won’t drink it at first, until it’s secure.”

He wants the Oji-Cree community to maintain its backup sources of water for six months after the new plant opens, in case of problems with the new source. “This is how we live,” Mr. Sakanee says, pointing to a trailer filled with hundreds of cardboard boxes containing 10-litre jugs of water, trucked into Neskantaga at federal expense on an ice road last winter.

There is also a small-scale reverse-osmosis water purification system, in a wooden shack near the lake, where residents can fill jugs to haul away. But this system has occasionally broken down in the winter, sometimes forcing people to buy water from a privately owned grocery store. “It’s like we’re buying our own water,” said Allan Moonias, a councillor in Neskantaga.

A water filtration system was built in the community in the early 1990s, but tests soon found that it was malfunctioning, and the boil-water advisory was officially imposed on Feb. 1, 1995.

It’s a story that has recurred endlessly across Canada in the decades since then. Poor planning, mismanagement, inadequate monitoring, jurisdictional confusion and the challenges of remote locations have all contributed to the persistent delays in building treatment plants – and the plants often break down when they finally do open.

At the Slate Falls First Nation in Northwestern Ontario, the federal government opened a new $11.6-million water treatment plant in March, 2018. The plant was aimed at ending 14 years of boil-water advisories. But less than six months later, the Slate Falls advisory was imposed again because of what Ottawa called “technical deficiencies” in the equipment. The advisory was not lifted until July this year.

“There is more work ahead, but we’re working shoulder to shoulder with communities to lift the 56 remaining advisories by March, 2021, as promised,” said a statement last month by Indigenous Services Minister Seamus O’Regan.

In Neskantaga, the lack of safe water has hobbled daily life in countless ways. For those without a vehicle, the journey to collect water in large jugs can take an hour or more. To boil large quantities of water, they need to buy gas for their stoves, another time-consuming task. Boiling enough water for a shower or bath can take so much time that most people end up using the tap water for showers – and many have complained of skin rashes and infections as a result.

By October, if the new plant is completed on schedule, all of this could change. But after decades without clean water, the people of Neskantaga are finding it hard to imagine the new era.

Some wonder if the pipes and taps will be still tainted, even if the water is clean. Others predict that the new tap water will look different from the water in the jugs, provoking more apprehension in the community.

“It’s going to be hard to convince people that it’s okay to drink the tap water,” Allan Moonias said. “It’s going to take time. People will hesitate. They still have a trauma in them.”

For anyone younger than 25, the tap water has never been safe and the jugs are all they have ever known. The older people have trained themselves to avoid the taps and their habits have become ingrained. Now, the community is pondering the psychological hurdle of the switch to taps.

“How do we get people to trust the tap water?” Chris Moonias asks. “We need to figure that out. Twenty-five years is a long time.”

One of the community’s elders, 73-year-old former chief Peter Moonias, still remembers the old days when Ottawa provided water to the visiting teachers, nurses and trading-post workers in his community – but not to the Indigenous people.

He heard federal officials promising that this would be fixed when the community moved to a new location in the 1990s. Instead the boil-water advisory was swiftly imposed.

He points to a dozen boxes of 10-litre water jugs, stacked outside his door because there is no room inside his overcrowded house, shared by seven people. “Is the water still good, sitting in the sun like that?” he asks.

Peter Moonias says he will be “very surprised” if the new treatment system is functioning in October as promised. But even if it does, it will be difficult to break the habits of a quarter-century.