At a high school in Thunder Bay last fall, Melissa Roberts had her students using the blade of a scraper to remove the fat and flesh from deer hides draped over wooden beams.

Over the following weeks, they would soak the hides, donated by local hunters, then measure and build frames to stretch and dry them.

For the group of Indigenous students, it was a chance to learn about the traditional tanning techniques practised in many of their communities. But the activity had an added benefit: Ms. Roberts was linking their experiences back into the curriculum for high-school credits.

As many school boards across the country struggle with low graduation rates among Indigenous teens, Ms. Roberts’s board, Lakehead Public Schools, is piloting an approach to teaching the provincial curriculum in the hopes of engaging Indigenous youth as soon as they set foot in high school. Unlike other programs that mentor and encourage students to earn credits in their regular classrooms, Ms. Roberts runs an academy that immerses teens in lessons on culture and traditions that translate into marks.

The program, named by a local elder, is called the Kendomang Zhagodenamonon Lodge, which means knowledge, the seven grandfather teachings and a meeting place.

It is tucked on the main floor of Hammarskjold High School and run in partnership with the local Friendship Centre, where Indigenous leaders were consulted on how to marry curriculum and culture.

Students in Grades 9 and 10 who have been identified as at risk of dropping out can work toward credits in the program and then gradually connect, as they grow more comfortable, with classes within the larger school setting.

Students involved in the deer-hide tanning activity, done in the past academic year, smoked the hide to make buckskin, which they later sewed into medicine pouches. Ms. Roberts asked them to write about the process and the ceremony, which counted toward their English credit. She awarded them marks in math for the measurements involved in making the frames to stretch the hides. And for science, the class discussed the chemical reactions that occur between the acids and fats in the hide and the deer brain, which is made into a soup to massage into the hides to soften them.

“If they were in a regular classroom, for the most part they wouldn’t come to school,” said Ms. Roberts, whose mother is Ojibwa and came from Eastmain, Que., before following the fur trade to Moose Factory and then settling in Fort William First Nation, across the bridge from Thunder Bay.

“Here, I have to adapt my teaching style to fit these kids, because that’s what they need. Sure, we cover the curriculum. But how I do that is very flexible," she said.

The program is in its second year and unlike a typical classroom, which can have 30 students, there is a cap of 17. About 12 students are currently enrolled.

It was created because educators were concerned that many Indigenous students lose interest in school as early as Grade 7 and that affects their learning and leads to lower graduation rates.

Several school boards in Canada have taken steps to change how Indigenous students fare in the classroom, especially since the Truth and Reconciliation Commission’s calls to action. In Ontario, the previous government made revisions to several parts of the curriculum, including history, making residential schools, treaties and the contributions of Indigenous people a mandatory education requirement.

Sherri-Lynne Pharand, who until this month was a superintendent of education with the board, said the changing demographics of Thunder Bay and the number of Indigenous families and children moving into the city made it important to meet their needs. (Ms. Pharand was recently named the new director of education at the Keewatin-Patricia District School Board in Northwestern Ontario and took over the post on Jan. 21.)

Some observers have quietly noted that the public school board also had to address the fact its overall student population has fallen dramatically. Lakehead Public Schools had 15,314 students in the 2000-01 school year, but by 2018-19 it was down by almost half, to 8,834, according to Ministry of Education data. About 21 per cent of the student population is Indigenous.

Ms. Roberts and her team connect with elementary schools to find out which students are either not attending class regularly or are at risk of dropping out. Those students are then invited to enroll in the program when they reach high school. The lodge students have participated in activities such as beading, working with birch bark, drumming and painting.

Ms. Pharand said the pilot will run for at least four years so a cohort of students can move through high school. The board is tracking attendance, credit accumulation and the skills students are picking up in the program, she said.

How does the board know this program will work? “That’s a good question. We don’t, really. We’re piloting this," Ms. Pharand said. “We have looked at research, we’ve looked at what is it that helps kids feel safe and accepted and valued.” She added: “This is an opportunity for them to be in a classroom all day with a teacher, learning all of their different subjects but within part of the broader school. So it’s a safe way to connect throughout the school for kids that need that.”

On a recent school day, a handful of students trickled into Ms. Roberts’s classroom. She explained that enrolment is low because the program is still new. One of her lessons that day was to choose 10 items in the classroom and have the students write down what they were reminded of when they touched the object. They later learned the symbolism of an eagle feather and dressed a feather with beads.

Ms. Roberts was energetic, her hair pulled back in a ponytail. When a student walked in late, she sat beside her to explain the lesson and ask her about her tardiness. The girl explained that she stayed up late “staring at the ceiling.”

Ms. Roberts doesn’t reprimand students for coming in late or being distracted by their cellphones. Most of them, she said, are dealing with difficult home lives. Their struggles can be traced back to the history of colonialism and the long-lasting effects of the residential school system. One student hadn’t attended school much since Grade 4. His mother had addiction issues and couldn’t care for him. His aunt took him in, but she died by suicide. He then lived with his grandmother and was forced to become the “man in the family at age 10," Ms. Roberts said. Other students struggle with poverty, live with physical or emotional abuse and family members suffering from addictions. Some have mental-health issues.

"We try to build up their confidence every single day. Sometimes it’s not their time for the program. But the door is always open. And they’ll come and go, and they’ll come back. They always know we’re here, so I hope that gives them some sort of comfort,” Ms. Roberts said.

“If we get them their Grade 9 and 10 credits … as much as we can, then that’s helpful.” (There’s a common understanding in education that if teens earn 16 high-school credits by the time they are 16 or at the end of Grade 10, they are more likely to graduate.)

Sean Monteith, education director at the Hastings and Prince Edward District School Board in Belleville, Ont., says Indigenous students face such huge challenges that many boards struggle with how to help. Mr. Monteith, who is from the Lac Seul First Nation, northeast of Dryden, has been noted for his work with Indigenous students, initiating the graduation coach program at Keewatin-Patricia District School Board, where he was previously director. He is also an adviser to the Indigenous Trustees’ Council of the Ontario Public School Boards’ Association.

He said school boards may be a bit nervous about trying something new when it comes to helping Indigenous children for fear of failure. But earning a high-school diploma helps students lead healthier and more productive lives, he said. Low levels of schooling are correlated with poverty, crime and a reliance on government support for housing, according to a C.D. Howe Institute report released in January, 2016. The report said a high-school diploma increases the probability of being employed by at least 25 percentage points, regardless of whether the student is First Nation, Métis or non-Indigenous.

“Graduation isn’t the panacea for all of our Indigenous societal challenges, but I’ll tell you, man, it is more than just a piece of paper. It is the opportunity for the next step and it has the potential to change the trajectory of the pathway of many, many of our communities,” Mr. Monteith said.

For Janessa Moonias, attending the lodge program is a step toward that diploma. She and her family moved to Thunder Bay from their isolated community, Neskantaga First Nation, about 450 kilometres north of the city. The larger school was so overwhelming that Janessa spent the first three weeks of this academic year coming in late and wandering the hallways at Hammarskjold.

“I don’t really like being in a crowded room with a lot of people,” the 14-year-old said softly, her black hair partly covering her face.

She was connected with Ms. Roberts’s alternative program, and on that afternoon she participated in the lessons and then dressed a feather with beads. Left on her own, Janessa may have joined the hundreds of Indigenous teens who have struggled in school and eventually dropped out.

But she said of Ms. Roberts’s program: “I like it here. I’m working on coming in more.” 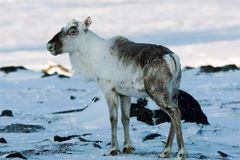 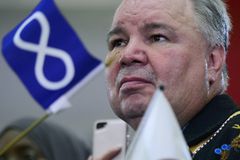