Children and youth in remote First Nations who have died by suicide are a tragic examples showing Canada’s harms toward Indigenous children were willful and reckless, lawyers argued in Federal Court Wednesday.

Ottawa has said that there was inadequate evidence for the Canadian Human Rights Tribunal to award compensation to First Nations children harmed by the child-welfare system.

Ms. Matthews pointed to tragic cases in the remote First Nation of Wapekeka, which in 2016 was concerned about suicide pacts among a group of young girls in the area.

Wapekeka submitted a proposal to Health Canada in July, 2016, seeking funding for an in-community mental-health team as a preventive measure, but the proposal was left unaddressed by for several months by Ottawa. A response only came after two 12-year-old girls, Jolynn Winter and Chantal Fox, died by suicide in January, 2017.

“The fact that there are gaps in services and the fact that this has incentivized placing children in care in order to obtain access to services meant Canada’s lack of action in general and lack of a response to Wapekeka in particular, was willful and reckless and the tribunal says it was intentional,” Ms. Matthews told the court Wednesday.

“The tribunal’s decision to award compensation for denials and delays of Jordan’s Principle claims was eminently reasonable.”

The arguments are the latest in a continuing judicial review brought by Ottawa of a 2019 Canadian Human Rights Tribunal decision that awarded $40,000 to each Indigenous child who was removed from their families and communities before 2006 by a systemically underfunded child-welfare system. The compensation was also awarded to their caregivers.

The federal government’s lawyer, Robert Frater, told Federal Court Justice Paul Favel Monday, and again Wednesday in response to other parties’ submissions, that the tribunal’s award was far too broad and sweeping.

Mr. Frater argues the tribunal did not have the authority to award individual damages because it did not hear any evidence or testimony from children or their families to justify individual compensation.

“Because it awarded compensation based on inadequate evidence, the tribunal was unable to draw important distinctions and provided vague, sometimes ambiguous, delineations of who is to be compensated and in what circumstances,” the government’s factum states. It added that the CHRT “failed to define concepts that are critical to establishing a link between Canada’s conduct and the compensable harm.”

It is the Nishnawbe Aski Nation’s view, however, that the tragedy in Wapekeka demonstrates that there was “ample evidence of individual harm of the gravest degree before the tribunal and is a stark example of the tribunal’s ruling against the federal government,” Ms. Matthews argued.

The tribunal’s 2019 decision said Ottawa “wilfully and recklessly” discriminated against Indigenous children living on-reserve by not properly funding child and family services and awarded each child, and their parents or grandparents, $40,000 in compensation.

The case will continue in Federal Court on Thursday, where lawyers will present their arguments on a second, related decision by the tribunal that expands Jordan’s Principle to children who live off-reserve or who are not registered under the Indian Act.

Jordan’s Principle is a rule stating that when different levels of government disagree about who’s responsible for providing services to First Nations children, they must help a child in need before deciding which one is responsible for the bills. It was named after young Jordan River Anderson from Norway House Cree Nation in Manitoba who died in hospital while the provincial and federal governments argued for years over which who should pay for his care in a special home. 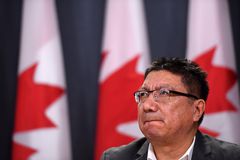 Ontario First Nation 'in shock' after two more young people take their own lives
July 17, 2017
Private donor funds suicide-prevention program for Ontario First Nation community
January 25, 2017
Report an error
Due to technical reasons, we have temporarily removed commenting from our articles. We hope to have this fixed soon. Thank you for your patience. If you are looking to give feedback on our new site, please send it along to feedback@globeandmail.com. If you want to write a letter to the editor, please forward to letters@globeandmail.com.
Comments