Gina Smoke was in the Calgary airport last week when she overheard three men discussing supporters of a Wet’suwet’en protest who had slowed rail traffic across Canada. Ms. Smoke, an Indigenous liaison with the union Unifor, said the word “trains” caught her attention. The men were talking about “plowing down Indigenous people with the trains,” Ms. Smoke said.

The men, who were sitting in an airport lounge, laughed approvingly at the idea. One of them talked as if it was a video game, making sounds and acting it out.

Ms. Smoke just looked at them. She felt sick, she said.

“They think it’s okay to talk about killing us, hurting us, running us over, shooting us,” she said. “It’s outrageous what’s happening.”

Across the country, Indigenous people are reporting incidents of racism linked to the dispute over the Coastal GasLink pipeline and the associated demonstrations that stopped rail traffic. The tensions have led to death threats and confrontations, and contributed to a sense of unease for many, whether they are connected to the protests or not.

He said the far right seizes on moments like this to sow division and push its radicalizing messages, typically via social media such as Facebook.

“They need things like this. They need issues to latch on to and provide a message and a rallying cry,” Mr. Balgord said.

Some are calling for vigilante action such as patrols on railway lines, while others harass and threaten demonstrators and their supporters online, Mr. Balgord said.

People associated with the Wet’suwet’en and Mohawks of Tyendinaga who protested at a main railway line in Eastern Ontario received a bomb threat from an anonymous e-mail account recently, Mr. Balgord said. The account has been suspended.

Erica Violet Lee, a Cree graduate student at the University of Toronto, was home in Saskatoon and took part in demonstrations last week. She was among a group that gathered near a railway line and forced trains to slow as they passed through the city. She said the First Nations group was confronted by counterprotesters, some of whom shouted racial slurs and encouraged the protesters to step into the path of trains.

The protest camp was mostly populated by young people, some of whom were intimidated. Ms. Lee said organizers eventually shut down the camp in part because they were concerned about safety.

“We just told everyone to not engage with them. But it’s really hard when someone is standing right in front of you trying to get into your face. They were calling us racial slurs and saying that we were dumb and didn’t know what we were doing,” Ms. Lee said.

While she was dismayed, she said a great deal of support and understanding also came from the community, as people brought food and supplies and offered words of encouragement.

"There are more and more folks who are supportive of Indigenous rights,” Ms. Lee said, adding that she believes this is a product of the momentum generated by the Idle No More movement of 2011.

Ms. Lee and Ms. Smoke said the atmosphere reminds them of the aftermath of the acquittal of Gerald Stanley in 2018 in the slaying of Colten Boushie, a Cree man who was shot dead on Mr. Stanley’s farm in rural Saskatchewan. The jury verdict shocked many people and sparked demonstrations. Ms. Lee said the hostility she has felt in Saskatoon is reminiscent of those tense times.

Gabrielle Fayant, founder of the Indigenous youth group Assembly of Seven Generations, said on Twitter that the group moved a drop-in program in Ottawa “due to death threats and ‘ordinary people’ saying they will use guns on Indigenous peoples.”

In Sault Ste. Marie, Ont., a local news outlet said it would no longer allow comments on stories related to Indigenous issues because the discussion was too often hurtful, hateful and racist.

“At least one of you called for police to shoot peaceful protesters and several of you suggested drivers run down the human beings holding Wet’suwet’en solidarity demonstrations,” said the notice published on the Soo Today website.

Mr. Balgord said he is concerned about the potential for violence arising out of this moment.

“The tone and timbre of these threats, their widespread nature, the fact that it’s leading to real-life activity. ... That’s pretty serious,” he said. 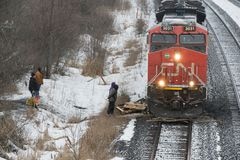 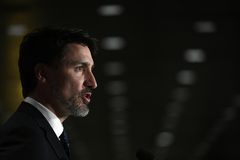