When seniors at Montreal’s Yvon-Brunet nursing home started showing flu-like symptoms in the spring of 2020, it took more than a week before lab results confirmed they had contracted the novel coronavirus.

Then, as staff tried to relocate the infected patients, they faced an unexpected complication: The beds were too wide to be simply rolled through the doors of the rooms.

These were the hurdles faced by health officials in Montreal when COVID-19 first struck last year, according to testimonies Monday at coroner Géhane Kamel’s inquest into the impact of the pandemic on Quebec nursing homes.

The inquest is looking this week at the 185-bed Yvon-Brunet nursing home, where 73 residents died during the pandemic’s first wave.

At the same time, testimonies also mentioned the situation at another long-term care facility, the 128-bed Montreal Chinese Hospital, where no one died of COVID-19.

The tale of the two facilities underscored how, when little was still understood about the new virus, early staff initiatives made a difference at the Chinese Hospital. Meanwhile, Yvon-Brunet slipped into a familiar pandemic pattern of asymptomatic transmission, missing employees and residents suffering in squalid conditions.

Montreal’s regional director of public health, Mylène Drouin, testified that her staff was already in a state of heightened vigilance when the city’s first COVID-19 case was confirmed on Feb. 27. However, additional staff couldn’t be hired until a state of emergency was declared.

It was on March 13 that the province issued a ministerial decree declaring a medical state of emergency. “To have a few more weeks would have helped. But no one foresaw that numbers would rise so quickly in Montreal,” Dr. Drouin said.

There were also technological challenges. Lab results still arrived by fax and had to be manually entered into computer files. Furthermore, Montreal public health used a different computer platform from the province’s system. The regional software, known as DCIMI, was being phased out when the pandemic began. “It was near its end of life,” Dr. Drouin said.

She said one place where health workers first expressed concerns about COVID-19 was at the Chinese Hospital, which in the end suffered no fatalities from the coronavirus.

Isabelle Matte, an administrator for the local health board, said Chinese Hospital employees brought their own masks and wore them weeks before they became mandatory. They also took more precautions at home, isolating themselves from their families.

At Yvon-Brunet, residents with symptoms were first tested on March 26 but the positive results only came back on April 3. During that period, seven more seniors were admitted to the facility.

Sonia Bélanger, the chief executive of the local health board, said it was under government order to discharge hospital patients and transfer them to elder-care homes. At the time, Quebec expected the pandemic to hit hardest in hospitals.

Ms. Matte said professional movers had to be hired and trained in wearing protective equipment because the beds were too large for staff to fit through the doors.

She added that beds in the basement zone were separated only by curtains so patients with dementia wandered around, infecting others. “There were cases everywhere.”

Eventually 120 residents and 105 employees were infected. By the end of April, a quarter of the nurses and half of the auxiliary nurses and orderlies were missing from work.

Ms. Kamel read from a letter by a daughter of 95-year-old Ephrem Grenier, one of the residents who died that month.

Sonia Grenier was allowed a final visit as her father was near death. She found him emaciated and half conscious, alone in a dark, smelly room, with his clothes and bedding tossed in a pile, diapers and incontinence pads scattered on the floor.

“I went outside,” she wrote, “and collapsed in tears on a bench.” 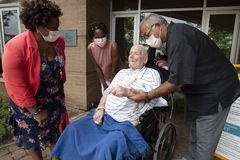 How Montreal has so far dodged a third COVID-19 wave and what other cities can learn from its success
May 13, 2021 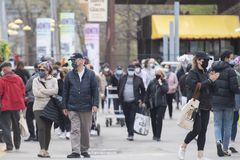 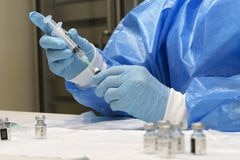