In the quiet moments of her day, Katie Doering will write letters to the families of children who spent time in her classroom before they died. There was the little boy whose laugh brightened a room; a young girl who wanted to be a teacher, just like Ms. Doering; and another student who loved music lessons with drums.

Sometimes, Ms. Doering will mail the letters to the families.

Sometimes, especially when she addresses the letters to the child, she will instead tuck them inside a folder she keeps nearby. She has given that folder its own label: “Grief.”

Ms. Doering has spent more than a decade teaching at Ronald McDonald House school in Toronto, where children undergoing medical treatment – as well as siblings – spend time in a classroom when they are not in a doctor’s office or at the hospital. The letters are how Ms. Doering, the school’s principal, copes with the reality of what can happen when students are seriously ill.

The school is the only one of its kind among the 368 houses around the world because it’s a full-day school, where students are divided up based on grade level for lessons in math, language and science, and it allows siblings to attend.

It is tucked into the main floor of Ronald McDonald House, a place to stay for 81 families and a 10-minute walk from the Hospital For Sick Children. Three other adults work at the school, which Ms. Doering helped establish 15 years ago this fall.

The mother of three, who completed her PhD earlier this year, draws from a deep well of energy. She always takes time during the busy school day to listen when a child speaks.

The school gives children and their siblings a chance not only to keep up with their studies, but also a place to connect with others going through similar illnesses, she said.

“For me,” Ms. Doering said, “it was really about if it was my own kid, wouldn’t I want them to have this kind of experience?

“I know I can’t change the medical aspect of things. But I can make an impact in that child’s life. If their life is two years or two more weeks, it’s about making a difference in their day, that day.”

On a recent Tuesday during circle time on the carpet for the youngest students, five-year-old Inaya held up a happy face to show how she was feeling that morning.

“I saw Ava and she said hello back to me when I said hello,” she said.

“I was vomiting blood and I felt really sick,” he told his classmates, remembering a time before his three-organ transplant – liver, bowel and pancreas – in March.

Ava, 6, went straight for the happy face: “Because my brother, Carson, is moving out of SickKids, and he’s going to Bloorview [a children’s rehabilitation hospital]. My mom will follow the ambulance.”

Her smile widened as she spoke.

Ms. Doering said she wanted to teach in an alternative setting. She called Ronald McDonald House when she was doing her bachelor of education at the Ontario Institute for Studies in Education at the University of Toronto and was told that families had expressed an interest in schooling. What started as a five-week pilot project flourished into a full-fledged school.

In those early days, she ran tutoring sessions out of a utility closet. Later on, a bedroom was converted into a small classroom through the week, then wiped down and changed back into living quarters for the weekend.

The classroom arrived when Ronald McDonald House moved to its current location in 2011. It is a bright, colourful space that overlooks the playground. New families can register every Thursday. Her staff has grown to include two teachers and an early-childhood educator.

Samantha Harnadek was nervous about her son Mataeus attending this fall. He had a three-organ transplant after waiting almost four years, and she was scared of him falling ill.

Mataeus loves school, though. He is a friendly boy who is thoughtful with his responses. He was homeschooling before, and Ms. Harnadek, who lives in St. Catharines, Ont., wanted him to have the experience of listening to instructions, waiting his turn and sharing.

Eight-year-old Everleigh, with bright hazel eyes, said she was a “bit scared” to start at a new school "but it’s been good.” She was diagnosed with pulmonary hypertension and has been waiting for a heart repair and a double lung transplant. She carries an oxygen tank, and a nurse comes in during a lesson in subtraction to feed her a smoothie through a tube.

Everleigh says she misses her dogs and her friends back home in West Lorne, just outside of London, Ont. She’s not sure how long she might be staying: “You never know, because you have to wait for the perfect lungs to be available.”

Sitting beside her, 10-year-old Jack pulled up the hood of his sweatshirt. Jack named his rare brain tumour Jack’s Planet, because it looked like a planet. He is at the house waiting for his head to heal from the surgery, and then he can start radiation. The robots are his favourite part of school, “because you get to do coding with them, drive them around and make annoying noises.”

Ms. Doering said there were times when she wondered whether she wanted to continue teaching at the school. In one of her first years, she learned of nine deaths in a one-week period. There was another time, she said, when she heard another student ask a little boy a question.

The boy's sister had just died, but something elicited a chuckle from him that day. Another student saw it and asked how the little boy could laugh.

The boy responded: “I don’t have any tears left.” 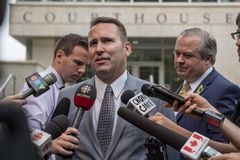 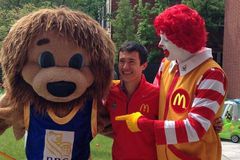 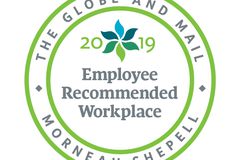