Greg Mercer
Saint John
Published May 17, 2021 Updated May 17, 2021
Comments
Text Size
Please log in to listen to this story. Also available in French and Mandarin. Log In Create Free Account

Moira Brown was beginning to worry they had missed their chance to find the big whale when a voice from an airplane above crackled over the radio. Snow Cone, who had disappeared into the Atlantic Ocean back in March, was spotted ahead, just about 10 boat lengths away.

The five-person crew from the Campobello Whale Rescue Team had spent the day racing across New Brunswick, and then scouring the Gulf of St. Lawrence by water looking for this particular North Atlantic right whale. Now that they had found her, they only had a few minutes to cut the fishing ropes dragging from her mouth before she dove again and vanished from sight.

Snow Cone, among the last of the world’s breeding female right whales, had been the focus of an international search and rescue mission since March 10, when she was found entangled in commercial fishing gear off Cape Cod in Massachusetts. On May 11, the day after she was first spotted by a Department of Fisheries and Oceans, or DFO, surveillance plane, Canadian rescuers attempted to disentangle her again, just as weather conditions were worsening.

“I’m thinking, ‘We finally caught up with her,’” said Ms. Brown, a marine biologist who has been studying right whales for more than 35 years. “If we lose that female, we also lose all of her future calves. We’re still trying to save this species one whale at a time.”

The whale rescuers readied their grappling hook, equipped with sharp blades designed to cut through fishermen’s ropes, eased their boat toward the 40-tonne whale and started throwing. Snow Cone allowed the humans to make two close approaches, cutting some of the rope, before the massive creature became evasive, dove again and disappeared.

The effort to help Snow Cone, nicknamed for the telltale pattern in front of her blow holes, has spanned two countries and multiple agencies. It’s required the co-operation of fishermen, DFO planes and boats and white-knuckled volunteers such as Ms. Brown, whose team towed their rescue boat across New Brunswick after the whale was spotted 65 kilometres east of Shippagan, on the province’s northeastern tip.

Hunted to near-extinction by the early 1890s for their oil and baleen used in harpsichord parts, umbrellas and corsets, there are now fewer than 400 right whales left in the ocean. Scientists believe perhaps only 80 of those are breeding-age females, which produce a calve every five to seven years.

“When a population is this critically endangered, the females are the ones who will ensure the population doesn’t go extinct,” said Stephanie Ratelle, a biologist with the DFO. “The problem with right whales right now is the sex distribution is offset. There are way more males than there are females.”

A U.S. whale rescue team was able to cut about 25 metres of heavy rope that she was dragging when she was last seen in March. But she dove and disappeared before they could finish the job.

Disentangling a whale at sea is dangerous, tricky work. In 2017, Joe Howlett, a co-founder of Ms. Brown’s rescue group, was crushed by the tail of a diving whale that he was trying to help.

But these rescuers say the risks are necessary to protect a species at a critical stage in its survival. Females need to have a good layer of blubber to support their calves, so anything that causes them stress or makes it difficult to feed is bad for the entire population, Ms. Brown said.

“From Cape Cod, up around Nova Scotia, past Cape Breton and into the Gulf of St. Lawrence, that’s a pretty good swim,” Ms. Brown said. “I imagine that was causing quite a drag on her the whole way.”

An aerial surveillance plane from the DFO was crisscrossing the Gulf of St. Lawrence when the whale was finally spotted again last Monday. The plane followed the mammal until the whale rescuers, accompanied by a DFO boat, could arrive and get in the water.

That plane, one of five used in the aerial marine mammal surveillance program, will continue to search for Snow Cone, and monitor for other right whales, the DFO said. They’re part of a network of underwater microphones, automated gliders and listening buoys spread around the gulf to help scientists track and count the endangered whales between April and November.

When a right whale is spotted, it can trigger temporary closings of fishing zones and alter shipping lanes. While that can affect fishermen’s incomes, Ms. Brown said the co-operation from that sector has been crucial in the effort to save the whales.

If Snow Cone is found again, another disentanglement may be attempted to get the last lengths of rope off the whale’s mouth, and scientists will be watching for any signs of poor health. But the searchers know it could be months before she’s seen.

“That’s a massive body of water. It’s like trying to find a needle in a haystack,” Ms. Brown said.

The plight of Snow Cone sums up the challenges facing all right whales. Last summer, her first and only calf was found dead off the coast of New Jersey. The baby whale appeared to have been struck twice by vessels.

Ship strikes and entanglement in fishing gear are by far the greatest source of mortality for North Atlantic right whales. The Canadian and U.S. governments have tried to move shipping lanes and get vessels to slow down, and adapt to changing ocean temperatures that have caused the whales to move into the Gulf of St. Lawrence in the warmer months – a new phenomenon that began less than a decade ago.

The good news is there were no right whale deaths or entanglements reported in Canada last year. But the risks to the whales continue.

Last month, Canadian officials challenged American allegations that fishing gear from Canada was to blame for the entanglement of a North Atlantic right whale found dead off South Carolina on Feb. 27.

At the time, the DFO said it had determined the gear, pulled from the body of a whale known as Cottontail, likely came from an American inshore fishing boat. But U.S. officials argued the gear was probably used by Canadian snow crab fishers.

Despite the international disputes, there are signs of hope for the species. So far, 17 new calves have been spotted this season in the calving ground that stretches from Florida to North Carolina – the best birthing rate since 2015.

“The numbers are encouraging. Any movement on the plus side is great‚” Ms. Ratelle said. “We just need to make sure we can protect them wherever they’re going.” 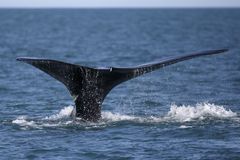 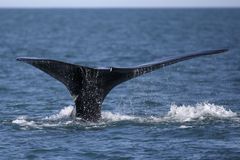