The coolest feature of the controversial personal van-office Ontario Premier Doug Ford wanted purchased for him is its leather upholstered auto-reclining bench that turns into a bed-like thing. The auto-recliner’s at the back of the van, behind a four-pack of upholstered rotating captain’s chairs amidship. Auto-recline saves a vanner – and that is a word – a lot of bending and grappling in a confined space, and the bed is big enough for a road-travelling politician to have a rest when he isn’t premiering.

The grooviness of the auto-reclining bench, of course, has done nothing to lift the storm of outcry stalled over Mr. Ford these days.

One Thursday last November, Mr. Ford visited A1 Mobility, a van converter in Mississauga, and was given a $50,696.21 estimate for a custom modification of a van. (The project hasn’t gone ahead so far.) There was debate between the Transit, made by the Ford Motor Co., and a Sprinter manufactured by Mercedes. The 50 large didn’t include the cost of the basic van, which can start at $40,000.

Which is interesting: Mr. Ford’s desire to crisscross Ontario in a converted van says a lot about him. Critics accuse the premier and his supporters of wanting to return to an earlier, simpler, less pluralistic, possibly more Paleolithic age. But on the van thing, he’s way ahead of his time.

Vans, and especially souped-up vans, are newly cool all over again, 45 years after they last oversteered onto the North American cultural scene. By last July, sales of full size vans were up 23 per cent since 2014; three-quarters are “upfitted.” #Vanlife, is “a weekly e-mail newsletter of #vanlife news": the hashtag has 4.7 million posts on Instagram. The Ford Motor Co.’s Transit van comes in 92 different body configurations, three lengths and three heights (the tallest lets someone who is six-foot-four stand up inside). A four-wheel drive van, once a rarity that sucked a gallon of gas every six kilometres, can now finesse 32. And I am not even mentioning the DIY van converters who create log cabin interiors in their vans, the VW Camper cult, or the wafting Westfalian wanderers.

Mr. Ford’s affection for upfitted vans might even count as an endearing trait – a sign of his love of the ordinary. In a personalized van, a van you live and play and work in while it travels, nothing changes, even while everything around the van changes. You can see how that might appeal to a conservative, tradition-loving politician.

Despite the public outcry over Mr. Ford’s proposed ride, $50,696.21 is not a lot to spend on a new custom van modification in this second golden age of vanning. (That’s a word as well.) The quote included the aforementioned loveseat, a minifridge, a 32 inch TV, a Blu-ray player, a 5/8 inch plywood subfloor plus carpeting and insulation, four 22-inch wide black leather sliding, reclining and swivelling captain’s chairs, a 3000 watt power inverter, “jet desks” and enough WiFi to connect the vehicle to Mars.

During the seventies and eighties, during the first wave of “vandemonium,” converted vans were about freedom and individuality – about Cragar wagon-wheel rims and built-in stereos and shag carpeting and octagonal steering wheels and Budweiser shifters and either very large or very small windows, depending on how much (illegal) weed you smoked. “Keep on vannin” was an actual slogan.

“No vehicle represents the good times and easy-living lifestyle of the 1970s better than does a custom van,” the automotive writer Ben Stewart wrote in 2017 in Car and Driver magazine. “The personalized van covered all the bases. It was part muscle car, part apartment on wheels, and of course, part art canvas serving as a very groovy way to express oneself.” Gerring Inc., a legendary upfitter near Chicago, offered a design series based on a driver’s astrological sign. “Apparently designed for impressing a prospective lover,” Mr. Stewart writes, “the Leo had a fold-out couch.” (Mr. Ford is a Scorpio.)

An early customizable ideal was the Dodge Tradesman “Street van”; it was supplanted by the redesigned Ford Econoline, known at the time as “a giant step for vankind.” A fully converted Econoline (bed, toilet, kitchen, dinette) could run as high as $11,000. But it also cut you free and made you permanently mobile, an ethos that resonates with Mr. Ford’s political persona, the maverick who invokes the notwithstanding clause when he wants to. The thrumming heart of vanning then was the suburban Midwest, near Elkhart, Ind., 180 kilometres east of Chicago. The heart of Mr. Ford’s support today is suburban Ontario, which could easily be the same place.

If the signature look of 1970s vans was personalized privacy found in a driveable shag-lined lair that resembled a body cavity, the go-to customized 2019 style is more public and boastful, a padded leather, stamped-chrome, LED-lit rec room cross between a private jet and a strip club. The look is as smooth as a suppository. And today’s vans are a lot bigger.

Experts trace the current wave of vandom to the introduction of the latest Ford Transit model five years ago. Before the Transit, which had been available in Europe for 50 years, North American vans were long, low, body-on-frame rectangles. The Transit and its modern competitors are uni-body designs that increase interior cargo volume.

The result is a boom in “adventure vans” and van-based offices, whether it’s a mobile plumber’s workshop or a desk and computer for an on-site insurance adjustor trying to assess damage from, say, a hurricane made worse by man-made climate change and inadequate carbon taxes. (Not that Mr. Ford believes in a carbon tax.) Companies such as Outdoor Vans in Oregon and PK Van Bodies in Ontario, among others, have built everything from mobile veterinary clinics to a barber shop on wheels, complete with barber pole and on-board towel warmer. Vans are also replacing limos as the big-shot ride of choice. “It’s a lot easier to climb into a high roof Transit van than it is to crawl along the aisles of a stretch limo,” says Tim Stoehr, general fleet marketing manager for Ford Motor Co.

Mr. Ford’s premier van is modest by van standards – a mere six seats in total (plus the reclining rumble seat). The new breed of vans can carry a legal limit of 15.

And seats are just the start. Mr. Ford did not choose a built-in toilet and shower, an outdoor shower, a gaming zone, a bar, a dinette, a kitchen, back door stuff sacks, a retractable screen side door, a Tepui rooftop tent, a tailgate barbecue station, power-driven side awnings, a custom upholstered mattress, bunk beds, headrests embroidered with the insignia of his favourite teams, a solar panel package, or a printed vinyl wraparound saga for the outside of the vehicle – all of which could run the government, or the police department, if one of them actually ends up paying for the van, as much as $160,000 on top of the cost of the van itself.

But maybe Mr. Ford is looking for more than luxury in his ride. The deepest driver of the new vanning mindset, Mr. Stoehr says, is the same mindset that drove it four decades ago: “We increasingly live in a more hectic world. So getting off the grid is relaxing. And people are utilizing these vans for purposing whatever passion they have. The whole van-life movement is something that’s gaining steam every day.”

To that end, if the conversion of his own van comes to pass, Mr. Ford might want to look at Outdoor Vans’ Mercedes Sprinter Darkstar model, which offers “tactical versatility” and is “4x4 ready,” should the road get rough. Its sleeping platform bears the slogan “Life is simple in a van.” 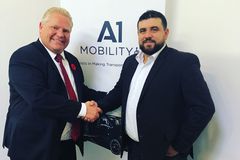