Ontario’s Integrity Commissioner can’t publicly release findings of a possible probe into government appointments with ties to the Premier’s former chief of staff – only the Premier could, and it’s not clear if he would do so.

The Premier’s office is conducting its own review, but has not indicated what information, if any, it will make public.

Interim Liberal leader John Fraser had asked Integrity Commissioner J. David Wake to review all public appointments. But Mr. Wake said in a letter to Mr. Fraser that if he investigates the conduct of Dean French – who resigned as chief of staff last month – under the Public Service of Ontario Act, he has no legal authority to release any conclusions publicly.

“I can make appropriate inquiries if I have concerns that a conflict of interest rule has been contravened by a former public servant who worked in a minister’s office,” Mr. Wake wrote to Fraser.

“However … if I elect to make such inquiries, I am limited simply to notifying the premier regarding any determinations or directions made with respect to the matter.”

Premier Doug Ford could release findings of such a possible investigation, Mr. Wake wrote. Mr. Ford’s office did not comment when asked if it would release the outcome of a potential probe.

“The Premier has been clear: Every public appointment must be made based on merit,” spokesman Richard Clark said in a statement. “That’s why he acted decisively by directing appointments be reviewed, a process that is currently under way.”

Mr. Clark later clarified that all “pending” appointments are under review.

Mr. Ford’s office has not said who is conducting the review, how many appointments are pending, what criteria is being used, and if any revoked appointments will be announced.

The NDP wants the legislative committee on government agencies to be tasked with the review, but they say the government is blocking attempts to call many appointees before the committee.

“One of the roles of that committee is to shine a light on public appointments by this government,” said New Democrat Marit Stiles.

Mr. French resigned following news that appointees to two foreign posts were personally connected to him, and just hours after a third connection was revealed.

Taylor Shields and Tyler Albrecht were being given lucrative agents-general posts in London and New York City respectively before their appointments were revoked after ties to French emerged. Ms. Shields was reported to be related to Mr. French, while Mr. Albrecht played lacrosse with Mr. French’s son.

Katherine Pal resigned from the Public Accountants Council after the NDP noted that she is a niece of Mr. French’s wife.

The opposition has also called into question appointments beyond those with personal ties to Mr. French.

Jenni Byrne left her post as Mr. Ford’s principal secretary for an appointment with the Ontario Energy Board. Charles Harnick, a former Tory cabinet minister, was made chair of Legal Aid Ontario. Gavin Tighe, a Ford family lawyer and who is also acting for Mr. French in a defamation lawsuit, was appointed to the Public Accountants Council.

Past Progressive Conservative party president Rueben Devlin was granted a three-year term as a health-care adviser. Ford campaign adviser Ian Todd was appointed Ontario’s trade representative to the United States, with a $350,000 salary. And failed Tory candidate Cameron Montgomery was appointed to lead a standardized testing organization, a job that was previously part time. 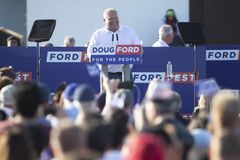 Premier Ford facing calls for outside review of appointments in wake of patronage scandal
June 26, 2019 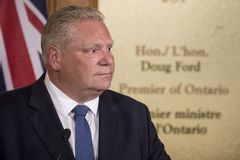