Harpoon in hand, Joey Angnatok pierces the ice. He thrusts the spear once, twice, three times, carving a hole. The fourth jab breaks through to seawater. The tool is an ancient means of measuring the thickness of the ocean’s frozen surface here in Nunatsiavut, a sprawling Inuit territory on the northeastern edge of Labrador. Mr. Angnatok is equally comfortable with sophisticated modern ice sensors, but the old methods, he says, are reliable.

It is his mastery of sensor and spear, and his ability to interpret and combine the data yielded by the tools, that has made him an indispensable part of both the local community and the global effort to monitor the effects of climate change in the Far North, which has been more severely affected than the rest of the world by rising temperatures.

“We’re all crazy Inuit from a little small town and we’re doing a big thing every day,” said Mr. Angnatok, a burly man with a sense of humour to match. In the spring, he skippers a fully Inuit-owned-and-operated longliner, the MV What’s Happening. The catch Mr. Angnatok and his crew land (which includes snow crab, northern shrimp and turbot) props up the local fish plant, a fixture in the economy of the town of Nain, Labrador’s northernmost permanent settlement.

But it’s what Mr. Angnatok and his crew do in the off-season that is arguably even more crucial to the future of life for Nunatsiavut Inuit, as well as the animal species that populate their lands and waterways.

When he’s not fishing, he operates his 60-footer as a marine research vessel, working with scientists to collect data that help with long-term tracking of sea ice and wildlife trends. He also hops on his snowmobile to do ice reconnaissance with his harpoon.

“Joey has an incredible combination of Inuit knowledge and science skills all in one human being, who also happens to own a fishing vessel where he can deploy research equipment,” said Rodd Laing, the director of environment with the Nunatsiavut government in Nain. “During COVID-19, a lot of research projects that would have otherwise not been able to continue, those projects were able to go on because of Joey’s skills and incredible knowledge.”

Mr. Angnatok sees himself as being on an urgent mission. “Climate change is impacting northern Labrador faster and more furiously than other parts of Atlantic Canada,” he said. The proof, he added, is in the poor shape of the sea ice – critical infrastructure in a part of the world where roads are scarce and residents must often travel over the frozen ocean by snowmobile.

Nunatsiavut is one of four regions that comprise Inuit Nunangat, the Inuit homeland. The other three are Nunavik (in northern Quebec), the Inuvialuit Settlement Region (in the Northwest Territories) and Nunavut. Collectively, they make up roughly 35 per cent of Canada’s landmass and half its coastline. Climate change is occurring three times faster in these regions than in the south, and Arctic marine ecosystems are warming twice as fast as the global average. Researchers have predicted that by 2030 Arctic summers will be free of sea ice.

Last year was a particularly short ice season, Mr. Angnatok said. At 83 centimetres, the sea ice around Nain was about half as thick as it was 10 years earlier. And today, there are 40 fewer days of snow annually in Nain than there were in the late-1950s, which further complicates ice travel.

At best, quickly shifting ice conditions are an inconvenience, disrupting travel to other communities and cutting access to hunting grounds and firewood. At worst, a lack of sea ice can interrupt vital supply lines by choking off a community’s ability to transport goods over solid ground. While Nain has an airstrip, the runway is unusable after dark and can only accommodate small passenger aircraft. Inclement weather often causes flight delays and cancellations.

Food shortages are a particular concern. According to data from PROOF, a group of food-policy researchers from several universities, 60 per cent of households in Nunatsiavut reported experiencing food insecurity between 2017 and 2018, compared to 12 per cent among the general Canadian population.

“The ice is forming, but not like it should,” Mr. Angnatok said. He frequently positions and checks the area’s ice sensors, which are operated by the Nunatsiavut government in partnership with the Canadian Ice Service. Each sensor is housed in a narrow, metre-long white plastic tube, lodged upright in the surface ice in a shallow bay near Nain.

“This is expected with global warming. All the models are saying that sea ice area is declining and will continue to decline,” said Frédéric Cyr, a research scientist with the Northwest Atlantic Fisheries Centre at Fisheries and Oceans Canada (DFO) in St. John’s.

Mr. Cyr is responsible for DFO’s Newfoundland and Labrador Climate Index, which describes the environmental conditions in the Northwest Atlantic Ocean, including the Newfoundland and Labrador shelf (the continental shelf that extends from Labrador to the east coast of Newfoundland). Time series data from the index, collected since 1969, show prevalent sea ice degradation, particularly over the past 30 years. Three of the weakest sea ice seasons were recorded during the past decade.

The ice degradation has been happening alongside increases in temperature, both in the atmosphere and at the bottom of the sea. The sub-Arctic ocean floor near Newfoundland and Labrador has been trending warm since the late 1990s, and in 2021 it recorded its second-warmest temperature in nearly 50 years (the warmest was in 2011). Air temperature data show a similar warming trend.

Temperatures are projected to keep rising. By 2050, the mean annual air temperature in Nain and surrounding areas is expected to increase by four degrees, with the greatest increases anticipated in winter months.

“If those numbers seem extreme, they are,” said Mr. Laing, who noted that the Paris Agreement commits Canada and other countries to working toward preventing global temperatures from rising more than two degrees above pre-industrial levels.

The changes on the ice and land are already evident. Mr. Angnatok has observed some of them from aboard his vessel.

“The ocean’s getting warmer and the cold-water species are getting tougher and tougher to find,” he said.

Research shows that sub-Arctic species are moving northward, changing the distribution of fish communities in the Arctic. This “borealization,” as boreal marine species invade the warming Arctic Ocean, is well documented.

On the other side of the Atlantic, for example, cod and haddock have migrated from the Barents Sea to the European Arctic. On the Pacific coast of Canada, chinook salmon and walleye pollock have moved northward from the Chukchi and Beaufort Seas. While these types of changes are less pronounced on the Atlantic side of the Canadian Arctic, observational studies there have shown a trend in a similar direction.

“This region is probably one of the last areas where species will start moving north, because we have this influx of cold water from the Labrador Current,” said Maxime Geoffroy, a marine ecosystem researcher at Memorial University who studies sub-Arctic and Arctic regions. 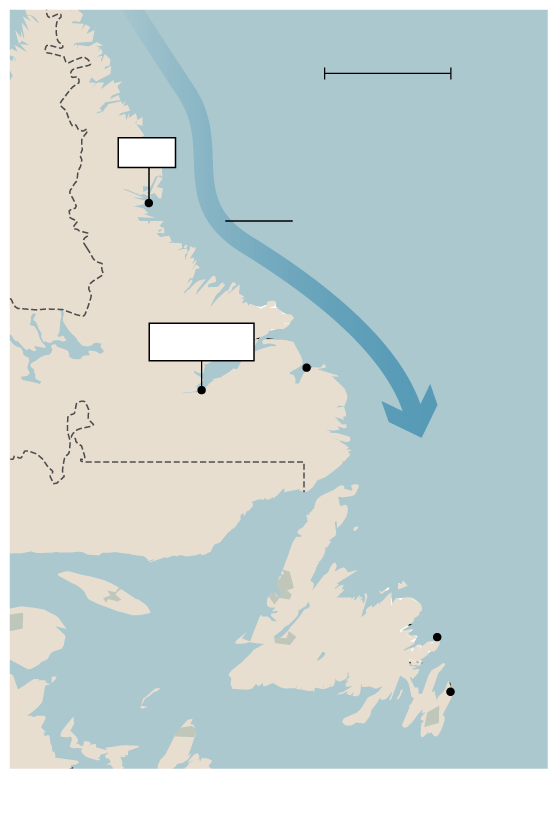 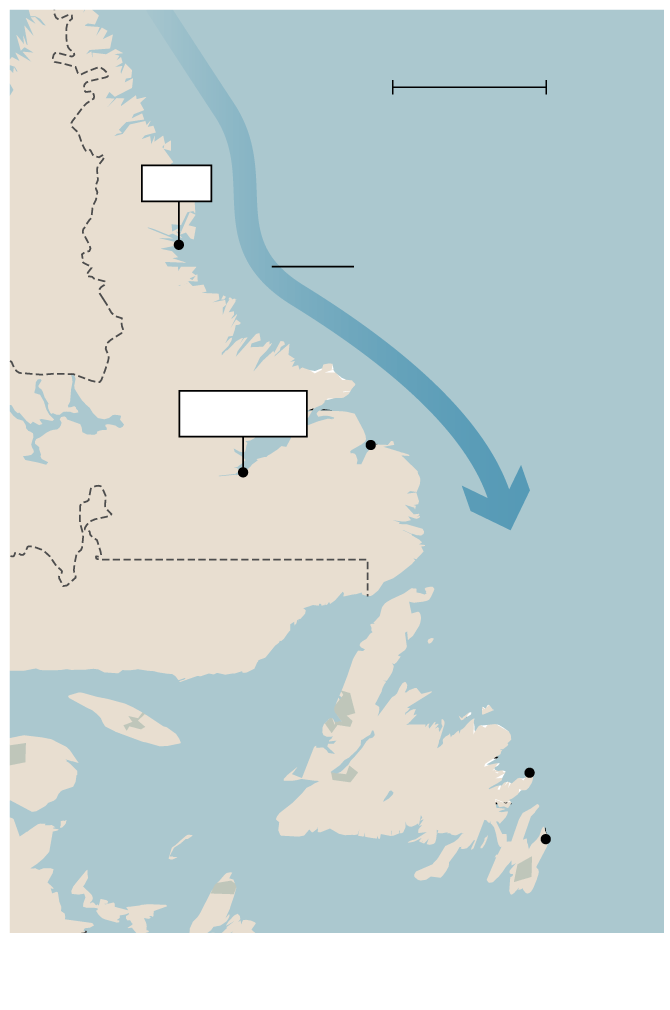 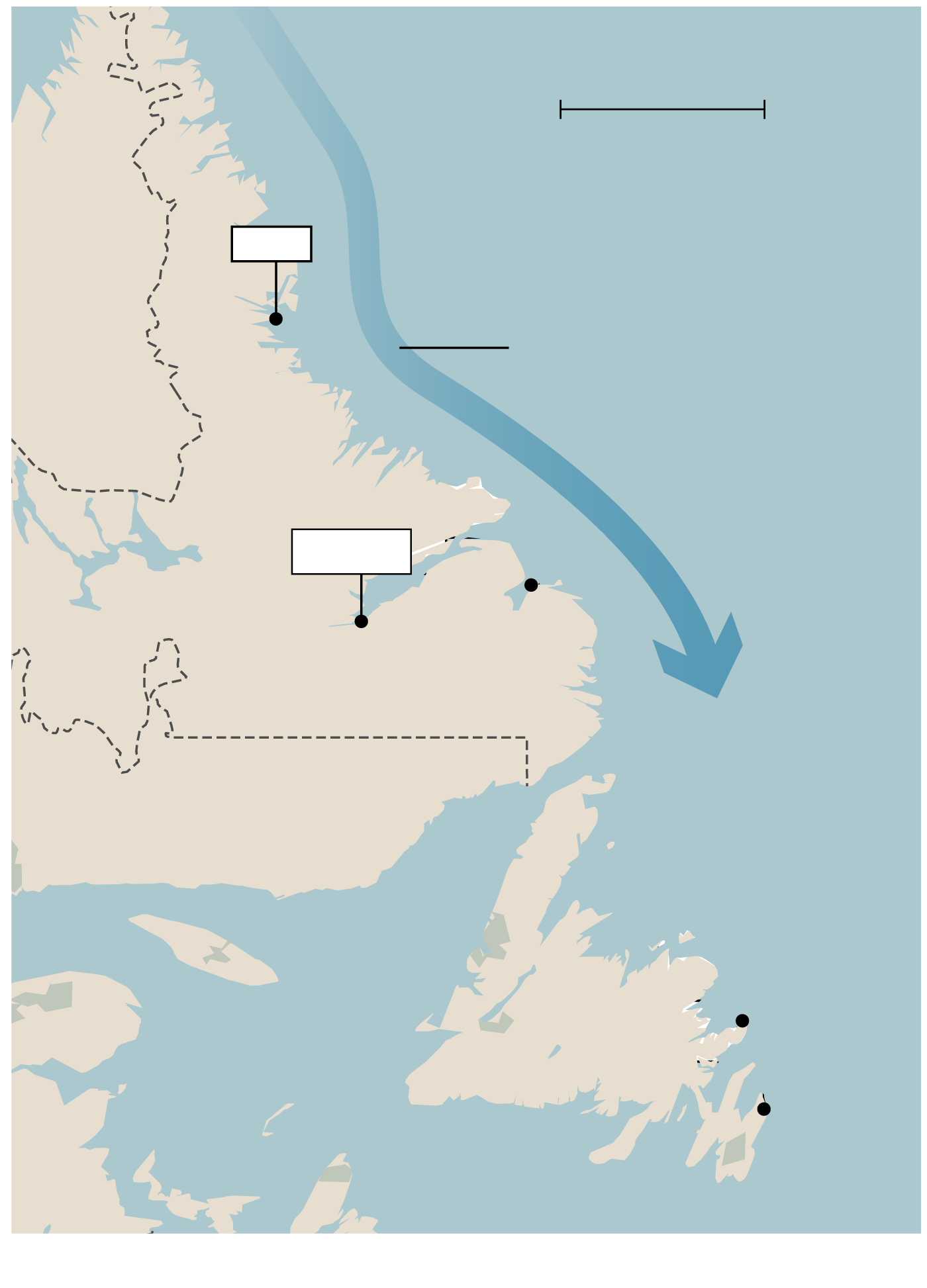 The Labrador Current creates what Mr. Geoffroy calls a masking effect, as cold Arctic waters flow along the Labrador coast. Even so, he said, research shows signs of species in the area expanding their range north, including capelin, a small foraging fish that is a source of food for other fish, whales and sea birds. Scientists who have studied the stomach contents of Arctic fish and sea birds have reported a greater-than-normal abundance of capelin in those species’ diets.

The Arctic and subarctic environments have already changed dramatically in our lifetimes, said Robert Way, a Queen’s University physical geographer who specializes in understanding the impacts of climate change in the north.

“We’re dependent on people on the ground and their observations,” he said. Many communities in Labrador and across the north lack weather stations and other scientific means of tracking weather and environmental conditions.

“They are reliant on their own ways of knowing,” Mr. Way said. And one thing people in the north know for certain is that the climate is changing. “Here, you don’t meet a lot of people who don’t see it for themselves. The perception that things have changed quite a lot is very widespread, whereas if you asked me that 10-15 years ago, I’d have said it wasn’t.”

As an example of locals collaborating with sciens, Mr. Way cited the residents of Mud Lake, a small community in central Labrador that is inaccessible by road. Data collected by the community about the timing of each year’s first and last snowmobile ice crossing show that the annual period of safe ice travel in the area has been decreasing by about 4 days per decade since the 1970s.

Inuit Tapiriit Kanatami, which is the national representative organization for 65,000 Inuit in Canada, calls for such community action in its national climate change strategy, tabled in 2019. “We continue to dispel stereotypes that portray us solely as passive witnesses to climate change, or as an early warning of the changes the rest of the world will increasingly experience, or a source of knowledge to be mined for use in research and policy-making that affects us but does not include us,” the document says.

The speed of environmental change has increased the pace of collaboration with people like Mr. Angnatok, who combine Inuit ways of knowing with scientific expertise. “There’s been a fundamental shift, especially in the last five years, to respecting Inuit knowledge and putting it at an equitable level to science,” Mr. Laing said. “People live in the Arctic. This is their homeland. This is where they’ve lived for thousands of years. They have intimate understanding of the environment, of species, of ice.”

“Any time a southern researcher comes up, the first thing they do to figure out what they want to do – whether it’s sample a fish or put an instrument out – is they talk to someone, because they know that local people know.”

Those who live and work next to a resource have the most at stake in seeing it flourish, Mr. Angnatok said.

“I’m like a doctor who gets up every morning and deals with the stresses that today is going to take on, but is blinded by the fact that he’s going to help people,” he added. “If I can turn around and help somebody not fall through the sea ice, it was a good season.”